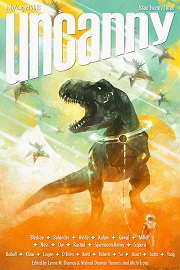 “You Can Make a Dinosaur, but You Can’t Help Me” by K. M. Szpara
“Bones in the Rock” by R. K. Kalaw
“By Claw, By Hand, By Silent Speech” by Elsa Sjunneson-Henry & A. Merc Rustad
“The Tale of the Three Beautiful Raptor Sisters, and the Prince Who Was Made of Meat” by Brooke Bolander
“The Emigrants’ Guide to Oregon, California, and the Unknown” by Brit E. B. Hvide
“Give the People What They Want” by Alex Bledsoe
“Nails in My Feet” by Mary Robinette Kowal
“Everything Under Heaven” by Anya Ow

This special issue contains nine new stories about dinosaurs. The introduction supplies a very loose common background, including the name of a fictional corporation responsible for the appearance of these ancient creatures in the modern world. However, the authors interpret this premise in completely different ways, and some ignore it entirely. The themed section of the magazine also includes “Expecting a Dinosaur,” a poem by Mari Ness, which will not be reviewed here.

“Red Lizard Brigade” by Sam J. Miller is an alternate history story set during the Cold War. Soviet scientists discover a way to reach through space and time. This technology brings dinosaurs to the present day as weapons. The main characters are two soldiers in the Red Army trained to work with the animals. They become lovers, but come into conflict when one wishes to change how the dinosaurs are used. The result is treason and tragedy.

The author uses an unusual narrative technique. The first half moves backward in time, and the second forward. Although this reflects the time travel premise, it adds little to the plot. Otherwise, this is a powerful tale about the tension between love and duty.

In “You Can Make a Dinosaur, but You Can’t Help Me” by K. M. Szpara, a female-to-male transsexual and his lover meet with the transsexual’s father. He still thinks of his child as female. He also happens to be the head of a corporation that acquires dinosaurs from another universe. A woman who comes from that other reality has special powers, and helps the two lovers with their problems.

In an overly obvious allegory, some of the dinosaurs change sex when they arrive in our universe. The narrative style is second person present tense, which can sound pretentious. Despite these flaws, and the fact that the dinosaurs play no important part in the story, this is an interesting examination of gender issues.

The narrator of “Bones in the Rock” by R. K. Kalaw was a dinosaur in the remote past. Reincarnated many times, she is now a woman searching for the bones of her ancient lover. During this quest, she meets with a representative of a company attempting to use genetic techniques to create living dinosaurs. A miraculous event brings the two together, and the woman learns an unexpected truth about her search.

This well-written story includes convincing flashbacks to the woman’s life as a dinosaur. Its combination of science fiction and fantasy is sometimes jarring. The premise is one that is easy to mock, but the author manages to maintain a serious tone.

In “By Claw, By Hand, By Silent Speech” by Elsa Sjunneson-Henry and A. Merc Rustad, a deaf paleontologist attempts to communicate with a living dinosaur through sign language. Half of the story is told in the voice of the scientist, and half through the eyes of the dinosaur. The premise is a unique and intriguing one, although there are no surprises in the plot. The reader has to accept the idea that the dinosaur has nearly human intelligence. Even so, its ability to learn sign language strains credibility.

“The Tale of the Three Beautiful Raptor Sisters, and the Prince Who Was Made of Meat” by Brooke Bolander is a mock fairy tale. A trio of dinosaurs encounter a foolish, indecisive prince. A clever princess, who wishes to leave human society and live alone as a witch, becomes involved with the three. The title provides a strong clue as to how things work out. This is a very light comedy, which provides a moderate amount of amusement. It is quite lengthy for such a featherweight story.

“The Emigrants’ Guide to Oregon, California, and the Unknown” by Brit E. B. Hvide takes the form of the diary of a member of the Donner Party, a group of Nineteenth Century pioneers who resorted to cannibalism to survive. In addition to burning deserts and snow-covered mountains, the narrator faces the apparition of a figure from his past. Throughout this ordeal, a strange, bird-like creature accompanies him. This animal is obviously supposed to be a small dinosaur. It seems out of place in what is otherwise a chilling ghost story.

“Give the People What They Want” by Alex Bledsoe is a hard-boiled crime story. A police detective interrogates a security guard who allowed a woman to make unauthorized use of a corporate time machine. The motive for the crime is peculiar, involving videotapes of dinosaurs. The reader eventually learns that the detective has a secret of his own. Many will find the story’s revelations difficult to accept.

“Nails in My Feet” by Mary Robinette Kowal is a very short tale narrated by a dinosaur puppet used in stop-motion animation films. It laments the fact that it is stored in a closet, doomed to fall apart. This surreal character study has no real plot.

“Everything Under Heaven” by Anya Ow is a sword-and-sorcery tale set in a fantastic version of the ancient Far East. Two women hunt dragons for very different reasons. (The editors apparently consider dragons close enough to dinosaurs to fit the theme of the issue.) One is the daughter of a wandering woman warrior. She only met her mother a handful of times, but learned an important skill from her. She is also a fine cook, and wants to dine on dragon meat. The other is the guardian of a village, seeking a dragon that killed a child. This story will appeal to readers of fantasy adventures.

Victoria Silverwolf has read enough stories about dinosaurs to last for a while.