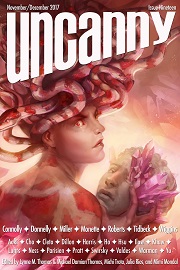 “The Bone Plain” by Karin Tidbeck
“Learning to See Dragons” by Sarah Monette
“Pipecleaner Sculptures and Other Necessary Work” by Tina Connolly
“Sorrow and Joy, Sunshine and Rain” by Troy L. Wiggins
“How to Survive an Epic Journey” by Tansy Rayner Roberts

The nineteenth issue of Uncanny presents the most ambitious story first and the best last, taking us from WWI to ancient Greece, with a point of interest along the way.

In 1932-3, the homosexual English poet Siegfried Sassoon is receiving letters from fellow homosexual English poet Wilfred Owen which were written in 1918 (up to the point that Owen was killed in the war) and then replying to them in letter-form in his journal. In them, their relationship is exaggerated to make them primary lovers with Owen often playing Patroclus to Sassoon’s Achilles and the letters are, I would think, unrealistically frank in an era in which homosexuality was a crime. Be that as it may, there is little plot here—only (to mix Virgil with Homer) much singing of arms and men.

This long novelette is a felt and ambitious story in terms of historical detail and density of its social, historical, philosophical, and meta-artistic tapestry but it is fairly dull in actual effect and, while its purple prose may be appropriate to its poetic protagonists, it’s a bit wearing for the reader. It also makes Owen obsequious in an almost feudal way which is also wearing. The protagonist’s fixation with cliches put me in mind of Orwell’s critique of the misuse of language and its political consequences but the story seems to arrive at opposite conclusions. Aside from that, it seems to ultimately blame the devil world and avoid personal responsibility while relying on, yes, the cliche that through art we are redeemed. Aside from the indications given by the title of the story and the villainous figure of the psychiatrist charged with treating shell-shock (PTSD), Sassoon is made to say in separate places:

I could not love the way I loved outside a set of rules, rôles, of straight and narrow pathways drawn by power. You should have been loved better.

Our bodies may be the site of our own pain and pleasure, but how can we make other bodies understand those experiences if not with art? Without artistic outlet, our experiences inform our actions only; we cannot teach others, nor learn from them.

“The Bone Plain” by Karin Tidbeck

Against her parent’s advice, Erika had taken up with an older man she had only met once. She lived in filth and squalor and resisted his advances, ultimately violently. On the wander from the law (so to speak), she winds up meeting an older guy who isn’t interested in assaulting her and wanders with him and his two companions “on the trail” until just the two of them make it to “the bone plain.” This is a world with cars and TV and Orange Crush and bone plains full of the remains of strange spherical creatures. Completing the trail is supposed to bestow a sort of redemption but it doesn’t much and getting to the plain is supposed to be magical but it isn’t much and, ultimately, perhaps the whole thing with her roommate might have been a dream or hallucination (but probably wasn’t).

This is fairly confusing aside from being another example of neo-Victorian “women must protect their virtue from men, who are likely to be evil” stories with the added element of entertaining the notion that killing someone for foot-licking may be a justifiable homicide.

This short-short seems for a long time to be another “metaphorical take on death that may have a fantasy sensibility but is in fact mainstream” in which Annie is dealing with her grandmother’s death and teaching herself to see dragons (that is, willfully exercising a faculty of optical illusion) before it becomes fantastic at the last second and in a somewhat unconvincing way. The assertion of Annie’s flat affect after describing her internal trauma is somewhat discordant and the connection between dragons and stone is somewhat forced. That said, its poetic tone is nicely judged, being neither purple nor beige and it will likely resonate with those who have experienced death and may not be fully adjusted to it any more than Annie was.

“Pipecleaner Sculptures and Other Necessary Work” by Tina Connolly

In the second consecutive short-short of the issue, Ninah is an “android” (programmable metal machine) who is a caregiver to small children on a generation starship. Near the end of the voyage, the Male Figure appears and informs her she will be weaponized while awakened humans can raise the kids. She makes a small gesture in response to this.

While otherwise very different, this may be the most sentimental robot story since Lester del Rey’s 1938 “Helen O’Loy.” And, while there may be similar wiring elements that could be used, I’m just not seeing pipecleaners on generation starships.

“Sorrow and Joy, Sunshine and Rain” by Troy L. Wiggins

An entity (godlike, demonic, whatever) is called into being to strive for justice for its people (“brown” people, though whether this means African-Americans, all Africans or all non-whites is unclear though it’s pretty US-centric—similarly, “pale” people are the wrong-doers and enemy but it’s unclear if this is Euro-Americans, all Europeans, or all non-blacks) but it’s a new and untutored entity which breaks the code of the entities and has to Learn Better.

This is a second-person story in which “you” are the entity and the first two thousand or so of its nearly six thousand words are devoted to overwritten description of your birth and nature which makes the reader tread water for a long time. When the story finally engages, it is mostly dialogue which is utterly discordant with the initial tone. Throughout, the mythology is somewhat conventional but interesting, yet the actual symbolic correspondences are not always clear or convincing.

“How to Survive an Epic Journey” by Tansy Rayner Roberts

Atalanta tells the tale of her life, focusing on the voyage of the Argo and her relationship with Medea in this story which is akin to a “fractured fairy tale.”

This story oscillates its tone for only a moment before establishing the true feel of the tale which may be summed up by:

We all know men like Jason. He was tall and muscled and golden: it was easy to believe he was favoured of the gods.

The gods have shit taste when it comes to picking favourites.

My namesake always gets a bad rap and it’s always a funny feeling to read such things but this keeps a light and fast tone which makes the tale entertaining. It’s a bit too long and too loosely structured but was easily the most enjoyable tale of the issue and could mildly appeal to anyone from Hellenophiles to feminists to those who enjoy snarky, zippy tales.