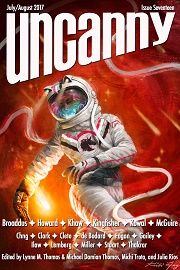 “A Nest of Ghosts, a House of Birds” by Kat Howard
“The Ache of Home” by Maurice Broaddus
“The Worshipful Society of Glovers” by Mary Robinette Kowal
“I Built This City for You” by Cassandra Khaw
“Packing” by T. Kingfisher

Reviewed by Valerie A. Lindsey

“How the Maine Coon Cat Learned to Love the Sea” by Seanan McGuire is an unexpected, but slightly winsome fairytale relaying how Maine Coon cats were created, why they lost their tails, and can tolerate wet and foul weather better than the average cat. The story is told in an old-fashioned way reminiscent of the 17th century. The frequent noting “but that’s another tale” weakened the overall impact of this story.

Kat Howard’s “A Nest of Ghosts, a House of Birds” captured my interest from the first paragraph, promising a story of fantastical mystery; it didn’t disappoint. Twenty years after the death of her grandmother, Luna Ryan learns that she has inherited her grandmother’s house. The only stipulation is that she has to live in it for a year before she can sell it. Luna’s mother tries to discourage her daughter as her childhood home disturbed her and she never returned once she left.

Luna is charmed to find the house filled with a variety of birds that manage not to dirty the house. The birds tell her their stories at night. Luna finds her grandmother Lily’s journal and learns that the birds are actually ghosts that, for whatever reason, are drawn to the house until they can share their stories. After each shares its story, the bird departs, leaving a few of its feathers. Luna had hoped to learn more about her grandmother and she finally hears her story. This is a wonderful story full of imagery about those who need to be heard, so that peace and reconciliation can occur.

In “The Ache of Home” Maurice Broaddus paints an excellent portrait of poor neighborhoods that are renovated and improved with total disregard for the current citizens who can’t possibly afford the progress of a society that refuses to understand their needs or how to develop without harm and disdain. Celeste notes the ridiculousness of the city spending over five million dollars to build a dog park and skate-park in her impoverished neighborhood that no one asked for nor needs. She fights against the city’s efforts to replace several neighborhood stores with an overpriced grocery store that won’t employ any of the locals and that none of them will be able to afford. ‘The man’ knocks on her door to convince her to back down. Celeste learns that he has his own magic and the two of them battle for her green space that she wants to transform into a community garden. Mr. Broaddus evokes a modern problem and magically transforms it into a winsome story that lingers.

Mary Robinette Kowal’s “The Worshipful Society of Glovers” weaves an excellent story of a journeyman, Vaughn, who has a sister plagued by frequent epileptic seizures. Vaughn works for a demanding Master with little pity or tolerance for Vaughn’s circumstances. Plagued by bad luck piled upon bad luck, Vaughn desperately bargains with a brownie to make unlicensed gloves in exchange for enchanted gloves that will prevent his sister’s seizures. Unfortunately, the initial cost of making forbidden deals may only be the beginning.

“I Built This City for You” by Cassandra Khaw is an unusual story where Anisa is so desperate to regain her lost love that she makes a bargain with “the Company.” Their price is all she is or has. In exchange, they give her the power to create a city to win back Sara. Once she has finished, Anisa finds she can’t leave the city created from herself and must rely on Company representatives to lure Sara to her. Unfortunately, Anisa learns that she never understood what it was that Sara really needed.

T. Kingfisher’s “Packing” is a first person narrative explaining to an unnamed individual how they can only take those animals, plants, seeds and insects that they can physically carry to their new land. The land they are in is dissolving and they must make tough choices as to what has to be sacrificed and what will be left behind. It is reminiscent of bitter choices that emigrants since time immortal have had to make.