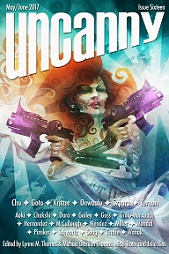 “Making the Magic Lightning Strike Me” by John Chu
“Read Before Use” by Chinelo Onwualu
“Paradox” by Naomi Kritzer
“Notes from Liminal Spaces” by Hiromi Goto
“Small Changes Over Long Periods of Time” by K.M. Szpara

Reading the May/June issue of Uncanny, I could see why the magazine won the 2016 Hugo Award for best semiprozine. Not only are the stories well-written and entertaining, they also invite reflection into serious issues such as gender roles.

Ursula Vernon opens with “Sun, Moon, Dust,” a tender tale of valor, love, and potato farming. When Allpa unsheathes the magic sword his grandmother left him, the spirits of three great warriors appear. Sun, Moon, and Dust are bound to the sword and they are ready to “go forth and conqueror” on Allpa’s behalf. Allpa, however, is more concerned with the health of his potatoes and the antics of his goat than learning to fight.

Reading “Sun, Moon, Dust” was a delight. Vernon introduces Allpa and his world seamlessly through the events of the story. Allpa’s gift for understatement lends a gentle humor and heightens the contrast between the warriors’ expectations and Allpa’s reality. Though I have questions about how the story’s resolution is possible, given the enchantment on the sword, I was too charmed by the story to be distracted by practicalities.

John Chu takes the subject of gender expectations deeper in “Making the Magic Lightning Strike Me.” Protagonist Charlie, once the “scrawny” guy at the gym who got trapped under weights, is now so big and so buff that the mere sight of him scares some people. He owes his transformation to extensive surgery and nanomachinery implants supplied by his employer, a company that specializes in “stealth instruction and installation of people,” ranging from stress free transportation of the super rich to taking hostages. The drastic changes in Charlie, the secrecy of his job, and the attendant health risks of both cause strain between Charlie and the man he loves, his best friend, Thom.

“Making the Magic Lightning Strike Me” is smoothly written, with characters that are well-developed and genuine. What is most “striking” about the story, however, is the way that it confronts the body image issues associated with our culture’s construction of masculinity. I applaud Chu for his sensitive, honest treatment of this topic.

After the seamless construction of “Sun, Moon, Dust” and “Making the Magic Lightning Strike Me,” it’s something of a shock to see the scaffolding showing through in Chinelo Onwualu’s “Read Before Use.” The story follows Alia, a professor of ancient texts, on her quest for the Mechanichron, a book that describes an unlimited source of energy that could solve the energy crisis in Alia’s world. Accompanied by her lover, Gilead, she sets out on a dangerous journey in search of an abandoned library where she believes the Mechanichron may be found.

“Read Before Use” is an entertaining adventure with a fascinating premise. Unfortunately, Onwualu tries to do too much in too few pages. In addition to her search for the Mechanichron, Alia must contend with discrimination, an overbearing bureaucracy, a ticking clock, and her complicated relationship with Gilead. As a result, the story feels rushed, the characters are underdeveloped, and scenes that could be edge-of-your-seat suspenseful pass in the blink of an eye. Still, I loved the ending and I look forward to reading more of Onwualu’s work and seeing her ideas develop further.

Hiromi Goto celebrates speculative fiction’s “potential for critical and transformative engagement” in “Notes from Liminal Spaces.” The piece has a non-traditional structure, alternating paragraphs of an expository essay about the flexibility and promise of speculative fiction with sections of a short story that illustrate these points. The morning after she sees a comet, Eiko finds three dead birds outside her back door. Her challenge is to make her partner and her daughter understand that the tiny green orbs inside the carcasses are not bits of gore, but gifts with the potential to transform Eiko and her loved ones.

I’ll admit it took me a couple of readings to appreciate the connection between Goto’s essay and story, but “Notes from Liminal Spaces” is easily worth reading twice. The story is enjoyable, the essay is inspiring, and experiencing the two together is thought-provoking.

Naomi Kritzer makes the reader stretch his or her brain even further in “Paradox,” a monologue given by a time traveler from the future. The time traveler explains his or her mission and discusses whether, and to what extent, traveling back in time and changing events can prevent future catastrophes. The time traveler’s answer to these, as well as the all-important question, “Can those of us living in the present make a difference in the future?”—vary from paragraph to paragraph.

“Paradox” is a mental tongue twister that kept me stretching and squirming to keep up at the same time that I enjoyed the story’s humor. Though his or her statements appear contradictory and confusing at first, they make perfect sense if there are many possible realities, or timelines, and the one we are living in changes moment by moment, depending on how time travelers from the future have, or have not, come back to interfere.

Finally, K.M. Szpara‘s “Changes Over a Long Period of Time” introduces us to Finley, a female to male/trans male who has the misfortune to be bitten by a vampire. Forced to choose between death and becoming a vampire themself, Finley allows the vampire, Andreas, to turn them. There isn’t time to get the required permissions from the Federal Vampire Commission, but the threat of legal action is the least of Finley’s worries. They must also deal with continued discrimination and unexpected physical changes in their body.

“Changes Over a Long Period of Time” is vivid, as realistic as a fantasy work can be. The story is grounded in realities, from bodily functions to bureaucracy to discrimination. The world Szpara creates could almost be our own—with the addition of legalized vampirization.

Natalie J. Havlina is a teaching assistant in the MFA Program in Creative Writing at Florida International University and a Florida Book Review Contributing Editor. Prior to coming to FIU, Havlina spent a decade practicing public interest law in the Northwest.