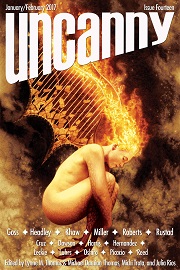 “Monster Girls Don’t Cry” by A. Merc Rustad
“Goddess, Worm” by Kassandra Khaw
“The Thule Stowaway” by Maria Dahvana Headley
“To Budapest With Love” by Theodora Goss
“Some Cupids Kill with Arrows” by Tansy Rayner Roberts

“Bodies Stacked Like Firewood” by Sam J. Miller
It’s tough to review a story in an SF/F periodical that is neither SF nor F. Random people gather to mourn the suicide of their transgender friend (identified by a male pronoun). Two in particular click, a male lover and a seemingly platonic female friend, and they conspire to steal the body of their friend in the hopes of honoring his dying wish. Interspersed throughout the story are comparisons between the subject character and the title character from F. Scott Fitzgerald’s The Great Gatsby, which somehow makes this a fantasy story. Despite the comparative periods in which both stories take place, the two stories could not be more different in terms of character and substance alone, regardless of the polar opposite tone of the storylines.

“Monster Girls Don’t Cry” by A. Merc Rustad
As a monster girl tries to make it in the world of humans, she finds herself torn between experiencing life and protecting her sister. One thing’s for sure, this ain’t Monster High. Just imagine if a few kids were kidnapped from the Xavier School for Gifted Youngsters, that’s basically this plot. Another story that just could have been a bit better if not for the clear affronts of misogyny and chauvinism that plague stories about outcasts, particularly the girls. Here’s a glaring hint—the antagonist is the only male character with any substance whatsoever. The end is pretty satisfying, though.

“Goddess, Worm” by Cassandra Khaw
The first of two mythology stories in this issue deals with a revolt in a certain Heaven as a female deity decides she doesn’t want to play by the rules of her male emperor any longer. Biases aside, the structure of the story has an almost poetic feel to it with a set of three statements interwoven between segments of the story as the heroine orchestrates her own fall from grace in the subtle hopes of affecting an ambiguous mutiny. There isn’t much to appreciate aside from that. Characters are generally bland and the conclusion is somewhat ambiguous, and not in an exciting way at all.

“The Thule Stowaway” by Maria Dahvana Headley
Another rejected plot from the Doctor Who storyboards, featuring Edgar Allan Poe. This overlong and burdensome story basically takes the concept of the plot from Shakespeare in Love. A woman bearing the names of several female characters from Poe’s greatest stories comes face-to-face with the New York-born writer and poet. Did I mention the story is overlong and burdensome?

“To Budapest With Love” by Theodora Goss

Another non-SF/F story from the perspective of a Hungarian immigrant whose timeline jumps between the days of Nazi occupation and the present. Despite its misplacement in Uncanny, the author does a good job of describing the Hungarian culture and how it is unlike any other in the world. Aside from Hungarian appreciation, though, there isn’t much plot to the story other than the character’s memories, but they are portrayed well enough for a read.

“Some Cupids Kill with Arrows” by Tansy Rayner Roberts

Warning: spoilers ahead. The build-up to Uncanny’s February holiday story is barely worth the wait. A woman with a Masters in Comparative Mythology meets with several gods from the Greek world, and goes out of her way to block her friend from scoring with the one and only Hercules (oh, and the main character’s name is Meg—anyone catch that reference?). It isn’t until the final paragraph of the story that her studies reveal expertise in more than just Greek mythology, but a reader with any understanding might expect to see more than just references to a handful of Greek gods and two Egyptian ones. Still, a cute end to an otherwise lackluster issue of a usually fun and engaging periodical.