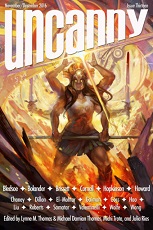 “Don’t You Worry, You Aliens” by Paul Cornell

This is my first read of this magazine and I am impressed. By this small taste I can tell that the editors favor good writing and well-crafted prose.

Paul Cornell has written one of Britain’s “cozy catastrophes” in “Don’t You Worry, You Aliens.” In fact the catastrophe is never explained. Suddenly people seem to be moving away. The protagonist, the local librarian, states that before the BBC went completely off the air it commented that no virus or plague seemed to be the cause. In any case, the librarian – an old man – is left completely alone in a small village with no electricity, internet or telephone. This story is a day in his life as he putters around town feeding his neighbor’s dog, and checking his garden. It is an elegiac story told at the pace of the elderly and is a beautiful miniature of his life. I must admit it has stuck in my mind. A very compelling story.

From the quietness of a lonely English village we read next a roar of anger, hate and rage by Brooke Bolander. “Our Talons Can Crush Galaxies” is told by a rape and murder victim. The rapist chose the wrong person to kill though, as she is an ancient being – griffin? angel? – who returns with her sisters for a reckoning. Bolander is an angry writer who writes startlingly beautiful prose. She slashes at the reader, taking us by the throat and never letting us go – taking back the familiar hero/villain scenario and putting it in the hands to whom it rightfully belongs – the victim. We need to read these stories as reminders that the person who is raped and/or murdered is the heart and soul of the story and not the hero nor the villain. Vigorous and powerful stuff.

In “Kamanti’s Child” Jennifer Marie Brissett drops us in media res in an alien battle between two races. I like that tactic as we have to really follow all the clues to understand where we are and what is happening. A quiet village living off the land is invaded by another group. Kamanti, a pregnant alien woman survives the attack. She decides to travel to a city of her own kind. Along the way we are introduced to her daughter telepathically from her womb and the invaders called hoomans. Even as we see that we are the attackers it is stated that all of this world is related. So, an Earth so far ahead that we have developed into different species? An alien planet that has developed us into different species? Still the mystery continues and we learn just enough to get through this story. Unfortunately, this fascinating world is not scaffolded well enough by the story, which falls flat. It is part of a narrative that I would like to visit in a longer version but this bite does not quite satisfy.

There is a type of comic story in the genre that predicates using slang speech patterns of this moment inside a fairy tale setting. I think back to L. Sprague de Camp among others. Most upon reading them today creak and groan badly. Alex Bledsoe writes a rather sad tale with this gimmick. “White Stag, Black Knight” is the straightforward story of a queen sending a knight to hunt down the white stag she sees in her woods. The joke is that she sends her nephew, a young and completely untrained knight to do this. With him she sends an old mercenary friend to keep him out of trouble. Trouble, of course, ensues with a Black Knight and a duel to the death. It is an old tale that might have been affecting. Instead, by using this gimmick it cheapens what the story is trying to say. A better writer could make this type of writing work. Let’s hope Mr. Bledsoe becomes a better writer.

If you want a modern update on an old fairy tale you need look no further than “The Green Knight’s Wife” by Kat Howard. It’s a version of the green man story that continues through the ages of kings and swords into bankers and lawyers and finally lays itself to rest in a competition TV show. Unlike the earlier story this is not gimmicky because the prose is tight and excellently chosen. Like Brooke Bolander’s story earlier in this issue, it is about the woman’s side of the story; a victim in these fairy tales that is usually ignored in stories of hero (knight, lawyer, actor) and villain (the green man). You may like one or all three of these stories but I find the juxtaposition of these three stories about heroes and victims to be illuminating. Not just about the theme, but in how you can tell a story on a similar theme in so many ways. (Also, the fantastic cover painting by Julie Dillon is perfect accompaniment.)

Next we have a funny story by Nalo Hopkinson. “Can’t Beat ‘Em” is an unusual fiction dealing with tiny animals that clog up people’s drains and eventually collect in the ocean. These animals being immortal start new suns from the planets they inhabit. It is also about a crush the narrator has on a plumber sent to clear out her drain and its aftermath. It is fun and throws off more imagination in its short form than many authors take series to reveal. It is silly, don’t get me wrong, but it is imaginative.

I very much liked this issue of Uncanny. With only the one story clanging in my ear, I would wish for longer stories and deeper stories in the future. But, now, this is an excellent issue of this SF magazine.