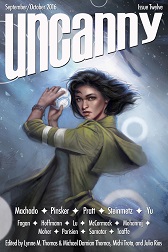 “My Body, Herself” by Carmen Maria Machado

Carmen Maria Machado’s “My Body, Herself” opens on the narrator’s sudden and untimely death: the rest of the piece is given from the perspective of the lifeless remains perceiving what might be her departed spirit, or her soul preparing for reincarnation, or something. Machado’s language is beautiful, and it’s easy to feel sympathy for a protagonist so cruelly cut down in the story’s first instant. The suspense is fun: what story possibly follows the narrator’s death? Readers whose tastes have been honed by mainstream genre fiction will not discover in this piece a protagonist with a clear motive, an adversary opposing her objectives, or a character-defining climactic choice. Without a classic story structure, one looks to literary devices to divine meaning. Perhaps the story is a metaphor for parenthood – like the deceased narrator who struggles to communicate with her more physically capable companion, parents can feel helpless sometimes to do much but call advice at one’s developing and ultimately departing children. But then, maybe not. The pre-open flight from a man may suggest a different meaning: an indomitable immortal spirit that can’t be restrained, or the promise of payback. Whether the narrator has any effect on the only other character that appears in the scene remains unknown at the close, which may say something wry about life but doesn’t lend itself to supporting the feeling of a closed story arc. The sentences are a pleasure to read, and the imagery a delight, but the whole requires a taste that doesn’t require solid story arcs to give context to high-quality elements.

Tim Pratt’s “Not a Miracle But a Marvel” opens on two couples arriving at a cabin for a weekend getaway. One can find nontraditional relationships in speculative fiction, either to make individuals seem alien or simply because the author wasn’t stopped in time, but Pratt not only shows the humor in the protagonists’ poly relationship but actually manages to make their relationship relevant to the plot. So I salute Pratt for turning what others use as wallpaper into a tool to advance and resolve a story problem. Well done –unexpected fun. Although the story itself doesn’t depict a climactic hard choice – such as pitting the narrator’s goals against his values – it definitely depicts a choice that shows the value the narrator puts on his relationships. The narrator’s attempted solution to the story problem may not represent a surprise reveal by the time it happens, but the villain’s reaction provides a rimshot readers will enjoy. It’s a fun piece, all the more so because of the fairy circle and the adventure into Neverland (or whatever locals call it). It’s also fun to see a gamer show why every adventure party needs a ten-foot pole and the coil of rope. (Don’t tell me yours didn’t have both on the character sheets.) But because this isn’t a D&D game, the characters need a plausible reason to have long lengths of rope on-hand, naturally – and so they have. Whether you adore puns or sneer at dad-jokes, you’ll find yourself smirking over Pratt’s story.

Sarah Pinsker’s “Under One Roof” is a fun-creepy not-quite-a-love-story about a young couple’s first days in their maybe-haunted just-purchased home. Pinsker subverts horror’s traditional romantic side-plot arc by giving us a narrator who knows what she wants when she sees it – and has the confidence to take it to the limit with glorious obliviousness to how onlookers will regard her afterward. The home’s weirdness is interesting, and creates fun choices. The “uhh … no” resolution is a perfect fit. Don’t miss Pinsker’s cursed house and the damned inhabitants of the room better left locked.

“The Witch of Orion Waste and the Boy Knight” by E Lily Yu is a third-person fantasy that follows a young woman pursuing opportunity (and finding misfortune) working her way up from the bottom. Figuring things out for herself is a major theme: we never see Yoda train her into a Jedi, or some elder take her under a protective wing until she’s trained up as a witch. Her victory is that, unaided and alone and mislead, she accomplishes what she does on her own. Her thankless jobs and her worthless suitor and her disdained sacrifices showcase the protagonist’s mettle. Supernatural power doesn’t free her from the slings and arrows of outrageous fortune so much as offer more reason to suffer them. Yu’s protagonist is fun to see confront her world, and her story a pleasure to read.

Ferrett Steinmetz’ “Rooms Formed of Neurons and Sex” offers erotic comedy in close-third about an aspiring writer whose dedication to accuracy in her work product produces unexpected results when she provides a heavily-researched experience to callers on a naughty-nurse sex line that serves as her day-job while she waits for her real talent to be discovered. Steinmetz’ piece casts a humorous light on so many everyday things – the embarrassments one finds at awkward junctures of relationships, day-jobs we suffer because we must, the invincible feeling of new love, the prejudiced declarations of Internet trolls – it’s a pleasure through and through. Sure, the story bears a warning its content could be disturbing, but it’s erotica – if it doesn’t disturb those people it isn’t worth much, is it? Read this one. You could discover you enjoy a story peppered with nouns like orgone and objectifuckation. And if you don’t try it, you’ll never know…