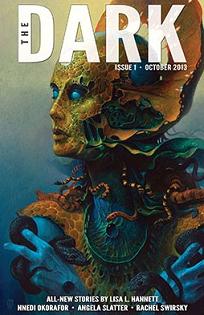 “The Carpet” by Nnendi Okorafor

Two American-born sisters travel back to Nigeria to visit the villages of their father and mother. While staying with their aunt and uncle, Zuma and her younger sister visit the marketplace. In the booth of a dealer with a reputation for being out of his mind, Zuma finds a gorgeous carpet with gold tassels. The dealer lets her have it for what seems like a low price, laughing with that “I know something you don’t know” attitude common to strange dealers in strange marketplaces. The sisters are dismayed to discover that their parents’ house in their father’s village has been emptied of all furniture and valuables by greedy shameless relatives. Zuma insists on staying the full three days of their visit inside the empty house. That turns out to be a bad idea. When unexpected help appears, the girls don’t know whether to be relieved or even more frightened. This is definitely a weird tale in the best sense of the phrase. The Nigerian setting is both colorful and disturbing. The sisters behave toward each other as sisters do, making them sympathetic and entertaining heroines.

A dainty wife with a real mania for lotions, creams, and perfumes turns into a giant flower. She gives off spores that turn into children who look human at first, then go floral. The poor human husband in the middle of all this tries to keep his sons from pollinating his daughters, but the giant flowers are in command. There’s not a lot of story here, just some pretty ideas strung together. As I read, I couldn’t help thinking of Kafka’s “The Metamorphosis” crossed with a Victoria’s Secret ad.

“By My Voice I Shall Be Known” by Angela Slatter

An illiterate quilter who devotes all her time, energy, skill, and wages to launch her lover Adlai’s career in trade is betrayed by him for a rich and pretty bride. Looks like this is going to be a revenge story, right? It’s a variation on Medea’s payback. Medea sent a wedding gift to Jason’s bride, a dress that caused the bride to die of a fever or literally burst into flame, depending on the version you read. In this story the quilter goes through the dark and dangerous challenges required to gather the ingredients she’ll need for Adlai’s wedding gift, the quilt that should have adorned her marital bed. The two most interesting elements of this familiar story are the details of quilting and the presence of the rusalky in the river that borders the setting. “Murdered maidens, those unfortunate in love” are beautiful women by day, then a nastier form of mermaid by night. The rusalky come from Russian folklore, so I expected more of a Russian flavor to the events of the story. The usual generic 19th Century Western European social and economic structures prevail. The one really unbelievable part of the story comes when Adlai makes sure his jilted quilter can’t spoil his wedded bliss. The thugs he hires spend too much time and effort doing what they’ve been paid to do. Such elaborate cruelty is out of character for Adlai. He’s weak, and he’s a cheating louse, but there’s no sign of violence in him. The injuries to the quilter are critical to what happens at the climax of the story. That leads me to believe the writer had to build those injuries into the plotline in order to write the ending she wanted to write. When characters start behaving contrary to their established habits and personalities just so a writer can pull off some fancy scene or plot twist, that says the writer is willing to treat her characters as mere puppets. In a story with the core theme of betrayal, that’s either lazy writing or the greater offense of author intrusion.

“Another Mouth” by Lisa Hannett

Maura keeps her starvation-level household going despite her husband Michael’s paralyzing depression over their son Barrel lost at sea. Each night the “young strangers” come prowling around the house looking for scraps in exchange for luck. Maura hires out as a cook so she can make a few pennies and snatch bits of food here and there, both for Michael and for the “young strangers.” One night the drowned spirit of Barrel gets into the house and starts feeding off Michael’s sorrows. Maura is forced to take drastic action to save Michael and win them a future free of the constant harassment. Well written, with plenty of creepy and sometimes disgusting detail, this is another excellent weird tale. I don’t quite understand why Maura refers to the “young strangers” when only one wight is the real danger. It’s possible I don’t want to know the answer to that question. Maura is sympathetic and well drawn. What little she has, she’ll damn well hold on to, no matter what she has to do to save her household.