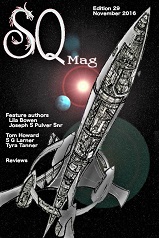 “A Pitying of Turtle Doves” by Lila Bowen
“From the Ashes” by Alan Baxter
“Sea Borne” by S.G. Larner
“Wind and Rain… and Umbrellas” by Joseph S. Pulver
“The Old Man in the Mountain” by Tom Howard

“A Pitying of Turtle Doves” by Lila Bowen

A retelling of a classic Grimm Brothers fairy tale set in the old west. Nettie Lonesome, the titular shapeshifting protagonist in Bowen’s “original” SFF series The Shadow, lands in a town under the pretense of aid to be given to the mayor’s wife. Her stepdaughter has been causing much grief and “needs to die.” With magic mirrors, poisoned apples, and of course seven short guys, it’s no secret Bowen’s intended interpretation will follow the same path as the immortal story made famous most recently in film. However, aside from the main character getting swept up in this story, there isn’t much deviation from the original plot, which must have made writing it very easy for the author. Original SFF publications deserve better than this.

“From the Ashes” by Alan Baxter

Stranded on a strange world on account of an accident for which she blames herself, a young woman learns to cope with her life as the alien among natives. Her only companion is a four-armed humanoid whose skin converts the nitrogen atmosphere into breathable oxygen for her. After three years among the natives, she and her companion return to her crash site where a startling secret is revealed. Again, scientific inaccuracies abound as if breathing oxygen were all humans needed to survive. The alien physiology could be explored a little more, too. Ultimately, Baxter gives the reader a psychological study into the characteristics of guilt and retribution, suggesting that humans may not be the only ones to possess it.

A strange anomaly of the sea is taking inhabitants of an island by hypnotizing them into drowning themselves, and the daughter of a fisherman wants to face the sea to put an end to it. Funny how this story gets published the same month as the release of the film Moana. While emotionally taxing and suspenseful to a fault, the resolution leaves the reader without much sense of satisfaction. It’s not as good as it could have been.

“Wind and Rain… and Umbrellas” by Joseph S. Pulver

The humor in this one almost distracts the reader from how little sense it makes. A rainy day in New York City is seen through the eyes of several people, judged moderately by how they are keeping dry. Jumping from a guy walking his dog to a funeral for a suicide committer, then to the weather woman who brings the bad news in a more human form than the standard apps in every smartphone. It is intended to be poetic, but are all the extra spaces, paragraph indents, and sentence fragments intentional? Odd for a writer who is praised by SQ’s editors as a “well-known poet with prose.” Still, the point gets across. When it rains, it sometimes pours, but it doesn’t have to rain everyday.

“The Old Man in the Mountain” by Tom Howard

What begins as a child’s effort to help turns into an epic journey of self-discovery. Finally a story worth recommending to readers! As teenage Denara copes with the struggles of growing up in a pre-modern civilization that still clings to the mercy of their gods, she soon learns her true value from the title character, who she inadvertently seeks on her mission to right a previous wrong. Along the way, she learns of the realities her people are actually living in, as well as the progression that must be made in order to grow as a society. Howard goes into great verbose detail and uses the curiosity of the adolescent mind to settle the conflicts that children would blindly accept and adults would vehemently deny. The adventure in and of itself starts off simple and becomes subliminally more and more intense with a “wow” moment that can’t be forgotten.