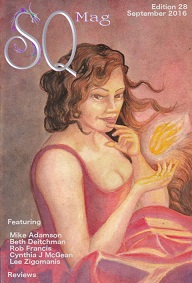 This flash fantasy horror story follows a man who’s won a giant egg at a circus showground. An unwanted prize that only gets worse when it hatches a bizarre ‘pet’ clown. Over a few weeks, the pet transforms the man into a permanent circus clown who has to seek sanctuary in the circus when it returns to town.

This was a quick and easy to read story that presented some unusual ideas. Overall, the story was okay.

“Lo, Behold these Many Gods” by Mike Abramson

Abramson’s short science fiction tale is about Gerome, a Franciscan monk, journeying through the galaxy to spread the word about Cosmic Christ. In his lifetime of travels, he encountered a wide range of sentient life. Some expand his belief while some are indifferent to his teachings. As Gerome ages, he encounters a nomadic group called the Vlorff who tell him of an ancient being that spans the dimensions. Following their directions, he seeks out this all-knowing being. What will he discover when he gets there?

The story draws out the descriptions of many diverse and truly alien life forms. This could be a boring catalog, but the engaging writing style and mystery draws the reader on, hoping for some insight at the end. In the end, I found the conclusion to be a letdown; the story’s real appeal was the description of the monk’s quest.

Daemiel is a repugnant monster in this flash horror story. When a mother leaves her crying baby for the ‘air gods’ to take, Daemiel risks their anger, stealing the baby. At first, he plans to eat the wailing child until he remembers his own start in life. Instead, he decides to feed it and bring it up as his own. To be the father, he must fight off both the angry ‘air gods’ and the mother, who comes back to reclaim her child.

The opening staccato style detracted from the story and it didn’t get into a rhythm until the middle section. The author raised concepts often seen in similar horror stories and it did not advance the genre.

A young couple are expecting a baby in this flash science fiction view of a troubling future. Without permission for the birth, they argue passionately to allow it. But the official points out that though they are almost qualified, they aren’t perfect enough yet. The story will come down to whether or not they can have this baby.

Another version of the old story of humanity controlling births. The reader must wait to see which of the two possible outcomes will end the story. With little in the story that creates an engagement, the reader has little investment in that outcome and the story felt flat and predictable.

A young ballet dancer has the night off in this horror story. She decides to attend the opening performance of Voshnikaya in Swan Lake. The ethereal ballerina holds the audience in rapt awe as she performs. The young dancer can find no flaws or drops in energy throughout the gruelling recital, and wonders where Voshnikaya get her energy. That’s the mystery we wait to discover.

The story was nicely written except it didn’t create a sense of mystery from the beginning, which could pull in the reader. As it progressed, the story grew more interesting. A good read by the end.