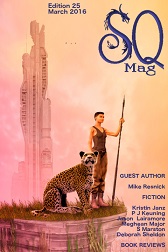 “Thou Has by Moonlight at Her Window Sung” by Kristin Janz

“Mwah” by S. Marston
“An Almost Tidy Case” by Meghean Major
“What the Sea Wants” by Deborah Sheldon
“Occult.net” by Mike Resnick
“A Hero for his People” by Jason Lairamore
“Radar Love” by P. J. Keuning

“Thou Has by Moonlight at Her Window Sung” by Kristin Janz is told from the perspective of a kitchen worker slaving away for a magical species that holds her enthralled not by whip or chain so much as by their addictive beauty. Janz describes a realm similar to the Tuath Dé Dannon of Irish legend.

“Mwah” by S. Marston is a morbid near-future tale of Andy, a cyber-hacker and black-mailer caught up in his own virtual constructions. Marston’s excellent narrative control keeps the reader on their toes as the text delves deep into Andy’s twisted personal life. “Mwah” successfully sympathizes with a down-right amoral protagonist.

“An Almost Tidy Case” by Meghean Major follows Fanny Helhouse as she investigates a missing persons case that has connections with the local factory and its horde of child workers. Fanny is a strong character of action who uses both intuition and smarts. As the title suggests, only half of the case is solved: we learn where the child is, but not her missing maid.

In “What the Sea Wants,” a dark fantasy by Deborah Sheldon, sailor Joseph has an up-close encounter with a siren. Sheldon’s descriptions make this story for mature readers only.

“Occult.net” by Mike Resnick is an entertaining narrative describing a deal with the devil. Unlike many stories that use this classic trope, Resnick leaves his open-ended, with a bit of hope for the protagonist.

In the science fiction action-adventure “A Hero for his People” by Jason Lairamore, two little green aliens play a deadly battle of one-upmanship after exposure to violent giant aliens who are, no surprise, human.

In “Radar Love” by P. J. Keuning, lady Christine comes up against the society’s gender expectations when she becomes a radar technician and objects to being married off. When a handsome, rich young man from the third deck asks for her hand, she wonders if she has found a like-minded individual at last. “Radar Love” explores strict gender roles without giving pat answers.