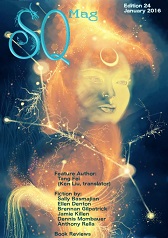 “Broken Stars” by Tang Fei (translator, Ken Liu)
“Stewards of the Land” by Anthony Rella
“Festival of Dissolution” by Dennis Mombauer
“Papaya Leaf Falling to the Surface of a Puddle Reflecting Streetlights” by Jamie Killen
“More than Flies” by Brennan Gilpatrick
“Kai” by Ellen Denton
“Beaver Resplendent” by Sally Basmajian

When Jiaming, a teenage schoolgirl, finds herself in the pit of culturally blind situations, she finds her respite in visiting a maternal soothsayer in her dreams. There, she is shown how her destiny is written in the stars. At one point, following an embarrassing event prior to graduation, Jiaming takes aggressive control of her astrological destiny, not realizing that she may be affecting the celestial plots of others as well. Ken Liu gives a very detailed translation of Fei’s work. Her description of the events that occur for Jiaming shows that growing pains like peer pressure and moving on from the death of a parent are no different in the Chinese culture than they are here in the western world. Jiaming’s painful transition to acceptance mirrors well the angst of the teenage mind as well as the use of fantasy as a coping mechanism.

“Stewards of the Land” by Anthony Rella

When a black girl and a gay boy discover that their town is slowly becoming populated by Aryan bigots, they seek justice from the spirits they visited in the forest. Much like the previous story, childhood fantasies are used as a coping mechanism to combat the trials of, in this case, racism and homophobia. Rella, a gay man himself, does his best to relate the story of how children view the intolerance of others, without an understanding of what intolerance really is. He falls short in capturing what most would consider to be a fear that might cause these kids to run into the forest to confront their demons, but he does share well the underlying hope that this kind of hatred is unnecessary in modern society.

“Festival of Dissolution” by Dennis Mombauer

As a popular circus arrives in town, Franok and his underage cohorts decide to break the rules to enter the mysterious and elaborate tent. Meanwhile, inside, Quinton and Jodee explore the tent as it transforms into a cavernous maze filled with wonders. The first thing this reminded me of was the house of mirrors attraction at a local amusement park. As a kid, you walked into the wall several times, but as an adult, you were able to navigate the maze seamlessly until you got to the treasured center room. Mombauer tells the story in present tense, but ultimately shows that the timeframes are not entirely consistent between the three protagonists. The last chapter carries with it the reminder that children should always do what they are told, or dear me, look what happens.

In a fantasy world where telepathic communications bond them, a girl comes to realize the power she has over the common citizens. When Dao is chosen by extraterrestrial visitors to be their rider through the streets, her and her mother’s social class skyrocket. The title references the full name of Puddle, Dao’s alien companion, who speaks to her through telepathy as they embark on the “First Contact Diplomatic Mission.” Killen shows the different forms of appreciation for positions of power, extending from the crux of understanding to the abuse of diplomatic immunity. A conflict in the marketplace with a shoe seller abruptly steers the story in a more violent direction, which might deter a little of the enjoyment. However, the perspective of Dao maintains childlike innocence as she and Puddle learn human nature together.

“More than Flies” by Brennan Gilpatrick

Population control takes a horrific toll on the unsuspecting masses in a not so dystopian future. As seen from the perspective of a common Chinese food delivery boy, Gilpatrick takes the reader on a suspenseful adventure into the realm of giant mechanical spiders, secluded to the underground when their use in tactical warfare has been exhausted. Gilpatrick captures how a diverse group of people respond to imminent death, from the religious fanatic to an older gentleman, and back to the boy who was simply in the wrong dark place at the wrong time. An air of humor can be gleaned from the final dialogue in which the delivery boy comes face to face with his customer. This is probably the most suspenseful story in this issue of SQ Mag.

Dreamworlds collide between student and teacher as an archaeology class discovers its roots. As John embarks on an assignment to “uncover a buried truth and bring it back to life,” his professor Joyce reflects on her own reasons for teaching what she does. Unbeknownst to the two of them, their encounters in the present have been foretold by adventures of the past, as seen through the eyes of previous lives they lived in their dreams. While less a fantasy and more a philosophical journey, both main characters recall their dreams as simply that. It isn’t until the end that the coincidence of their paths crossing is made clear, and when they do the story evokes a sense of mutual fulfillment.

At a time when we in the United States of America are on the edge of our seats to find out who will be our next president, Basmajian presents a hilariously elaborate joke surrounding the selection of the Canadian mascot. As told from the perspective of a proud alpha wolf, the classic setup involves a bar being visited by our hero, a vain lynx, a bluntly direct beaver, and a gluttonous moose. The presentation recalls that of the classic Aardman short films Creature Comforts and involves several interspecial jokes. While the outcome is relatively obvious, the way we are brought there is particularly funny and concludes the first SQ Mag of 2016 on a high and happy note.