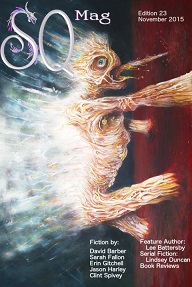 “The Smell of Wet Grass” by Lee Battersby

Mimi is an android out for a stroll, but the world is a dangerous place for androids struggling with free will. Lee Battersby, in his SF tale “The Smell of Wet Grass,” gives us a story of innocence, betrayal, and racism, all told through the eyes of Mimi. In this future, man has created the perfect servant, but fears the stirrings of independent thought they find in their creation.

This short is likeable enough, and Mimi is a sympathetic character, but the others are simple cardboard cut-outs of the standard tropes: evil juvenile gang members, uncaring scientists, and the golden-hearted “average joe.” The theme of racism is a complex subject, and is probably too much for this length of story, but Battersby is at least on the right track. The most powerful line (and to me, should have been the focal point of the story) was when Dr. Ableck tells Mimi “You don’t get independence… [or] walks in the park.” Mimi then asks, “Then why am I allowed to think about them?”

Sarah Fallon answers the unasked question “What if my boyfriend turned into a dog?” In “A Girl and Her Dog,” Cassie wakes one morning to find her boyfriend Rob has, literally, become a dog. Golden retriever, to be more specific. It’s a good thing he can still talk, though, since the story is told in first person from his point of view.

To be honest, I kept waiting for that Wilfred moment when we would find out one—or both—of our main characters was insane, but it never happened. What I got instead was another fantasy tale about how great it would be if the boyfriend left/learned his place. This was a cute story that ultimately disappointed.

Marina is twelve, intelligent, well-behaved, and friendless. In “Girls’ Gun” by Clint Spivey, it is the last that gets her in trouble. A first-person ghost story, Marina encounters something even more frightening than ghosts… history. There is an anti-aircraft gun on display in front of the local museum commemorating the Battle of Stalingrad and the women who volunteered to the man the guns until the end. It is here than Marina meets a group of young women who teach her more than how to smoke. This is a coming of age story with some unique role models.

Stories with a truly historical grounding are hard to do well, but Spivey tackles it with aplomb. He doesn’t rewrite or “re-imagine” any of the history, just gives us enough to make the story more real. Marina is a strong character (though her vocabulary is a bit advanced for a pre-teen) and the supporting cast are well-drawn as well, but her older sister, Sascha, is less so. I know she is there as both contrast and a hint of Marina’s possible future, but she didn’t make enough of an appearance to add much to the story. There was no real interaction between the two. Still, I like this for the ending, which is no less powerful because it was so easy to see coming.

Shania Lenton is a go-getter. A woman who apparently has everything, having sacrificed her soul to get it all. In “A Necessary Evil” by Jason M Harley, we have a soft-SF story of a near future where a simple drug allows you to see your past clearly, giving you the ability to at least acknowledge your sins—if not actually atone for them.

As short as this story is, it reads like an elevator pitch for yet another Twilight Zone episode the show was famous for—the O. Henry ending. Aside from that, this story irks me (though it might not others) in the no small bit of (probably unintentional) misogyny in the execution of the tale. I apologize for the hedging, but I get queasy when crossing the line from criticising writing to criticising the author.

One little mistake. Hanza, a little girl picking berries on the mountain near her home, makes a simple error that changes the course of her life. Erin Gitchell, with “The Guardian of the Mountain,” gives us a fantasy filled with monsters, magic, and curses. Hanza, you see, has drunk from the wrong stream and is cursed to change into a monster once she becomes a woman. Monsters, we find, aren’t inherently evil, and Hanza becomes, over the centuries of her exile, the titular Guardian. That is, until a strange man ventures up the slopes.

Gitchell’s writing is tight, and the characters and their motivations are clear. The reverse-werewolf aspect of becoming human with the full moon was a nice touch, and I didn’t see the ending coming until about three paragraphs before. I couldn’t help feeling the subtext was a little overwrought, though, with the idea that Hanza’s “change” intersected with her becoming a woman, and that her life was not “complete” until the right man came along. Still, there was a lot of nice writing, and it was an easy and fun read.

In “Where Time Travellers Go” David Barber gives us not the answer, so much as several of many answers. With time travel in this SF story you get alternate universes as a bonus. Lots and lots of alternate universes. Eventually all the versions of the POV character (never named for obvious reasons) end up sitting around a campfire sometime during the Pleistocene—apparently far enough back that the alternates can converge. They call it Home. There they wait for the possibility of rescue from their recursive fate by some future “temponauts” who never come.

I’m a sucker for time travel stories—especially ones that get all the implications right, leaving no gaping loopholes to slither through. This is such a story, and Barber explores some nice concepts, both old and new, while still weaving a fun yarn that has a distinctive Golden Age feel to it. In many ways, this is the best of the lot.