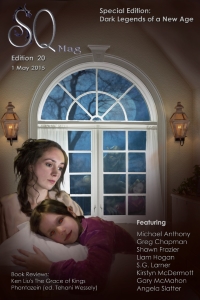 SQ Mag is an ezine which usually has a variety of stories but this is a “special edition” of “Dark Legends of a New Age;” that is, some new but many refurbished fairytales.

This is a post-modern mashup of (at least) “Bluebeard,” “Hansel and Gretel” (which forms the main plot), a morsel of “Snow White,” and crumbs of others. The post-modernity is exemplified mostly by the protagonist, Rosaline, being an overweight smart aleck who knows she’s in a fairy tale, along with a large dose of not-for-children sex to go with all the for-children violence.

Aside from odd lapses like an apple being a “green orb,” it is written plainly to keep a post-nineteenth century tone. Being told in the first person results in an error where a character is described one way when, by the twist at the end, we see the author had the narrator misleading us. It seems this particular tale is born of frustration with a certain type of male. Other than glitches like those mentioned, if you like this sort of thing, it may provide a tolerable read.

“The Bone Maiden” by Greg Chapman

And now for something completely different. This very overwritten, overwrought tale of darkness tries to be so black it becomes faintly silly. Though based on a Portuguese fairy tale, it reminds me, in a single aspect, of when the late great James Tiptree, Jr. was writing material in which emotions overwhelmed the aesthetic framework, specifically in Brightness Falls from the Air. Marcella, the protagonist, also must be tortured to produce life-giving tears which sustain very, very bad people. But, unlike the Tiptree, this feels contrived rather than born of authentic despair. Perhaps the ending will resonate for some but I didn’t see anything in it but futility and a wasted reading experience.

Aside from the overwriting, there’s also some bizarre writing. I’d be tempted to excuse someone having once seen “the sunlight guild the trees in gold” as a typo/proofreading error if it weren’t for expressions about the evil aunts having used their “power to usurp their sister’s husband from his throne” and being told that “Marcella’s wicked new carers allowed her to farewell the king and queen” and so on.

This allegory throws about every obstacle it can at one trying to get into it, including unreferenced pronouns, unattributed speech, and a bizarre opening scene. That said, it eventually comes to make a sort of sense after taking us through what turns out to be a three-part quest of offerings to “majesties” from a man in his effort to get back the life he had before his wife and son died in childbirth. Then follows a two-part darkening of the subject matter still further. This may float some folks’ boats.

“A Song for First Hours” by Kirstyn McDermott

Hespa is a new mother who discovers a supernatural being in her daughter’s room, leaning over the girl and staking a magical claim to her. Confrontation and conversation lead to a deal: rather than taking the child outright on her thirteenth birthday, she’ll take Hespa’s voice (it turns out Hespa is a singer) for all but an hour each year of those thirteen years, at the end of which her daughter will be free. But dark supernatural creatures often have a legalistic turn of mind and it’s not usually a good idea to deal with them.

I’m not sure the symbolism completely works in all details and on a surface level, this is our ordinary contemporary world in which the mother accepts weird beings popping in and out of mirrors with too much equanimity but it largely does seem to work on both levels. It is also cleanly structured and written, with very “sayable” dialog.And, if I was reading some of it right, it had some extremely clever, even profound, touches.

“The Black Bull” by Liam Hogan

In an interwoven brief narrative, we learn about the protagonist meeting and making a deal with the eponymous bull and how he came to be doing that, going back to his childhood with weird Uncle Mort and that man’s basement room full of 343 magic lamps. It feels somehow overcomplicated for its point but is mildly interesting and perhaps amusing.

Word of warning: this magazine flags (with literal flags in the website edition) the dialect of English each author is using and incorrectly flags this as American rather than British.

“The Drummers of Po Chu” by Michael Anthony

In a long ago China, Chi Lai is the leader of a small tribe and is being threatened by the king’s men for having offered insufficient tribute. After being wounded and being told he will lose his hand (and all his people will lose theirs after him) if the royal ruffians aren’t more lavishly paid, he goes to sleep and recover and has a dream which results in his summoning the six small drummers of the title. The rest of the plot proceeds without any surprises.

There is actually one unexpected bit but that is due to the author accidentally misleading the reader or making it easy for the reader to mislead themselves. First, the method of summoning is revealed by a “spirit” in the dream so I thought the drummers were magical from the start and the spirit was connected to them. It turns out that the “spirit” is apparently completely separate from the drummers. Second, the drummer spokesman says, “Chi Lai, of all our friends, we owe you the most,” to which Chi Lai makes no comment. The spokesman further says, “Chi Lai, do you forget your own youth when you were quick to question, but slow to believe?” While Chi Lai could take it as a general observation applicable to anyone, it felt specific. So I was under the impression Chi Lai and the drummers knew of each other prior to the dream and certainly that he knew all about them at least by the time the dream ended. Therefore, when Chi Lai gets the big reveal of who the drummers really are—which is thematically important—it seemed to come from left field. Then I realized that Chi Lai was in the dark about who they were and didn’t know that they were not as they seemed. There are other discrepancies, such as when the narrator says “[t]hough none understood the meaning of Chi Lai’s direction, neither did any challenge his wisdom, which had never before failed them,” immediately after which several people repeatedly question him. However, Chi Lai’s knowledge of the drummers was the main stumbling block.

This story is damaged by its title. By going for the “title of central image” it ruins the opportunity to “hope against dread.” In other words, there’s nothing exactly surprising here but the story loses any suspense it might have had. Then again, one of the keynotes of this tale of depression and woe is a kind of determinism so maybe not having any suspense was intentional.

A boy of twelve shows his younger sister the rather unmythical unicorn he’s found. We get the story of his hopeless life in the slums without a runaway mother and with an alcoholic father. Then an old flasher bum shows up and things get even cheerier.

This is not my kind of story and shares many aspects with “The Bone Maiden.” However, it is a far superior story in its control, its feeling, its evocation of misery, and its much more effective, if no happier, end. If you like this sort of thing, you will probably like this example.

This is a story in which the thematic “background” is actually foreground. It has virtually no literal “foreground” except in a faint spot in the background, much like Larner’s “Three Trophies.” It is a gender/power story which carries racial tones as well (the magic land is a West African place while the narrator is in New York and she’s using a liana root which is “too complicated for the white man to understand so they ignore it.” (That should probably be “too complicated for white men” with the “they.”) And, indeed, I don’t especially understand this story. In the foreground a black woman (girl?) has lost her mother. When her father goes looking for the mother in magic land, he goes missing too. Then the girl dreams in NY and is a bit crazy and apparently trapped away from magic land because her implanted superego is messing her up. Or perhaps not.

If you don’t care about an absence of characterization and lack of plot, and live only for Message and can confidently extract it, you may be pleased with this story. Otherwise, it will probably not satisfy.

While certainly not what you want if you’re looking for fun adventure fiction, this issue is actually not so dark with the McDermott, Hogan, and Anthony stories (and if you’re looking for “not so dark” stories, they might suit—with the McDermott probably being the best of those) and it is signally unsuccessful when trying too hard to be dark with the Chapman. It is unduly symbolic with the Larner and Frazier (unless you like that sort of thing). The Slatter is dark, yet is told in such a cynical, breezy way that it doesn’t truly confront its own darkness. (Pat Cadigan, for example, would have been able to deploy her cynical, breezy style in a way that would have engaged rather than distanced.) The McMahon tale most successfully enters a truly dark region and balances the literal and symbolic elements. Arguably, its failure is the lack of much that is truly fantastic beyond the central entity, which could as easily be a genetic sport. But it’s definitely the strongest tale here.