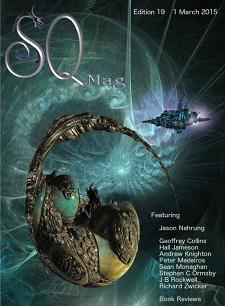 “Night Blooming” by Jason Nahrung
“Numbers Man” by Sean Monaghan
“Rainbows and Death Machines” by J.B. Rockwell
“Arrest” by Hall Jameson
“Trial by Fire” by Richard Zwicker
“Final Journey” by Stephen C. Ormsby
“All the Answers” by Peter Medeiros
“The Meet” by Geoffrey Collins
“Riding a Runaway” by Andrew Knighton

There’s nine stories in this issue of SQ Mag, published bi-monthly in Australia. Although the stories are available to read for free on the Web, you can also sign up for the SQ Mag newsletter and have them delivered to your email inbox in e-book format for free as well. For someone who doesn’t like reading fiction on a monitor but doesn’t mind reading it on an e-reader, getting a free e-book copy is a big plus. Today’s standard for most electronic magazines allows fiction to be read online in HTML for free, but if you want it formatted for an e-reader you have to pony up.

Nine stories almost qualifies as an anthology, since most electronic magazines have, on average, four to five stories. If we look at SQ Mag #19 as an anthology, can we discern anything they have in common? After poking around on the internet I discovered that SQ Mag had run a contest where they specified that submitted stories should involve trains, so a fair share (but not all) of these stories have trains in them. However, there is a variety of genres and story types represented. The scuttlebutt is that they will have more themed issues in the future.

The first story,“Night Blooming,” by Jason Nahrung is an urban fantasy-cum-detective tale. A distraught mother’s teenage daughter hasn’t come home after a night of partying, and it’s up to a female detective named Shane to find her. In this urban fantasy world, somehow (how this happened is never quite explained) “mythoes” are walking around and interacting with regular folks. “Mythoes” are “registered paranormal beings” and there’s a few different kinds – vampires, shape-shifters, and in our detective Shane’s case, people who harbor a demon. Much of the story has to do with Shane’s efforts to keep her inner demon in check while she’s searching for the teenage girl. Also she’s on (permanent?) leave from her job as the result of the demon. We’ve heard the phrase “internal demon”; this story examines what would happen if this phrase were literally true. Another intriguing aspect of this tale is its investigation of “goth” subculture. What would goth kids do if vampires were real? The story examines the lurking parental fear that has always been part of goth rebelliousness. It’s a clever idea to use the detective story as a framework on which to hang the story’s unusual details – amidst the weirdness, the reader knows that the story is about a detective investigating a disappearance.

The next story is “Numbers Man” by Sean Monaghan. It’s the longest story in the issue, clocking in at 6,700 words. It tells a familiar tale: man gets out of jail and wants to go straight, but the life of crime is trying to lure him back. Cyberpunk elements are overlaid on this basic plot. The prose is very straightforward and spare.

Although the plot frame is interesting enough, the cyberpunk and science-fiction elements hung on it are ones that we’ve seen before. Do we need so much focus on the food replicator, which we’ve already seen in Star Trek? The chip implant needed to be developed, with less about the food replicator. The authorities have implanted a chip in the head of the protagonist to prevent him from utilizing his special ability with numbers. However, the blocking chip is easily bypassed by using a “spyrax” – a sort of starfish that gloms onto his head. Why implant a chip at all if it can be so easily countered with a spyrax? I’m intrigued by the idea of the authorities implanting a chip into a criminal’s head as punishment – and the spyrax was interesting as well – but they cancelled each other out and rendered both confusing.

“While there are some good points to the “Numbers Man,” (I liked how it was difficult for the protagonist to find a straight job after getting out of jail, for example) revealing its potential, it needed more shine to make it memorable.

Next up is “Rainbows and Death Machines” by J. B. Rockwell. This is one of the better stories in the issue. It’s different and thus memorable. A bonus is the surprise twist at the end. A galactic empire has sent automated fighting machines to reign in the rebellious planet Isolis. These armored machines consist of a re-purposed train engine and thousands of weaponized rabbits. What’s not to like about weaponized rabbits? Perhaps this story is making a tongue-in-cheek comment on drone warfare. It was awarded “Honorable Mention” in SQ Mag’s 2014 Short Story Contest, and deserves the attention.

The next story is “Arrest” by Hall Jameson. It’s a solid horror tale, dealing with that wonderful sub-genre of horror which utilizes maleficent clowns. Jameson keeps the reader guessing. This tale manages to be surreal without going too far. A fine tale with a surprise at the end!

Then we have “Trial by Fire” by Richard Zwicker. This one takes place in Ancient Greece – very ancient Greece, as the shivering Greeks don’t yet have fire. King of the gods Zeus shows up at Phokus’ door. Someone has stolen fire from the gods, and Zeus wants Phokus to find out who stole it before it falls into the hands of humans. When Zeus tells you to do something, you do it.

I’m predisposed to like this story, because I studied Ancient Greek culture and language in college. The vignettes concerning the Ancient Greek gods were entertainingly familiar. The story is told with a humorous contemporary tone which makes for pleasant reading. It’s a pastiche of incidents from Greek myth with which we’re familiar. That these various incidents don’t entirely hold together as a traditional storyline isn’t to be blamed on the author, because he must use the myth material he’s been given. Zwicker makes a sturdy effort to tie everything together. “Trial by Fire” is an intriguing use of Greek myth, and is a strong story.

The sixth story in the collection is “Final Journey” by Stephen C. Ormsby. This one was a 2014 SQ Mag Story Quest (train-themed) finalist, and concerns a man genetically merged with a train. This begs the obvious question: Why? This question is never addressed. How does genetically merging a human with a train improve the train’s operation? Trains work fine already without this drastic step. Maybe an airplane or a spaceship could benefit, but a train? Anyway, the superiors of this genetically modified human/train hybrid have deemed him unstable, and after a complicated operation, he’s separated from the train and is just a human again. Things go downhill after that. Not the strongest story of the nine, but at only 1500 words it’s a short read.

“All the Answers” by Peter Medeiros is my favorite story in SQ Mag #19. “All the Answers” has a lot going for it. Its various subtexts are culturally relevant. In this dystopian future, everyone is monitored all the time. Cameras are everywhere; all phone calls are listened to. Our protagonist is a teenage girl named Cassandra, ready to graduate high school. She has a perfect GPA, she’s victorious in the Debate Club, she runs a four and a half-minute mile, and she has had a plum summer internship. She’s going places, she’s most likely to succeed, she hopes to get into Stanford. There’s only one last thing to do before launching into her bright future – she must take the Standard Aptitude Placement Exam (SAPE).

All Cassandra’s plans are dashed, however, because a fellow student has it in for her. He manages to place the answers to the SAPE where she will see them, and thus disqualify her. Not only does it disqualify her, it brings on the “shredders.” The shredders are spherical flying drones the size of a basketball that search for illicit information, literally shredding everything in its path. Drones have suffused the public consciousness. This story examines the big question: what might happen if they were turned on the domestic populace? This story has a great deal going for it – ubiquitous spying, drones, standardized testing, and unbridled ambition. All these ideas are handled skillfully, with flair to spare.

“The Meet” by Geoffrey Collins is a well written tale told in a hardboiled crime-noir style in which the prose captures the noir style effectively. The protagonist and antagonist turn out not to be human – but the reader only slowly finds this out. That this is subtly revealed favorably adds to the mood of the piece. This story bears re-reading once you’ve discovered this. It even spurred me to google the names dropped in the story, to find out more about what and who these mythical characters are. “The Meet” is a solid story, the noir style making it one of the more memorable tales in the collection.

Last up we have “Riding a Runaway” by Andrew Knighton. This steampunk story was a runner-up in the SQ Mag train-themed story contest. The story is straightforward, with a pair of protagonists on a runaway train filled with explosives, and manned by a mad scientist. There are some confusing references to the Tsar, Marx, and revolution. Although these historical references seem out of context, they provide the story with a heft that it wouldn’t otherwise have. It’s a fast-moving tale with some silliness thrown in.

Joshua Berlow is the founder of the International Psychogeography Institute.