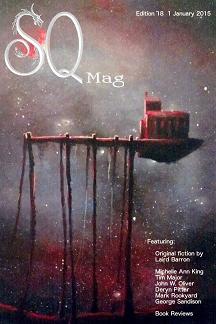 “Ears Prick Up” by Laird Barron
“The Visitors” by Michelle Ann King
“The Carbonite’s Daughter” by Deryn Pittar
“Like Clockwork” by Tim Major
“KFP” by George Sandison
“The Calling” by John W. Oliver
“Robert Fairweather and the Wrong Ticket” by Mark Rookyard

SQ Mag is an Australian ezine with an honorable-sounding concept: pay pro rates to an established writer, and then feature newer writers from around the world (at a lower pay rate), with the idea that the big name will draw in readers and give exposure to the newer authors. Other than the fact that this (not counting the two-tiered payment rates) is the business model of all magazines, this is one of the more sensible statements of purpose for most new magazines, which tend to lean toward manifestos about how they’re going to reinvent the genre.

Of course, the concept depends on the featured author. In the January “edition” (the magazine doesn’t use the word “issue”) the author is Laird Barron. “Ears Prick Up” is the story of Rex, an enhanced war dog (literally) in the army of a society that seems a lot like ancient Rome. He joins in with his “Dad,” who has his plans that are not quite what the emperor wishes. The concept is a good one, but Rex’s point of view is too limited (deliberately so – he is a dog) so that the events become murky.

Michelle Ann King contributes a story about a woman who has been chosen by “The Visitors,” a group of aliens that want to take humans to the stars with them. She has decidedly uneasy feelings about it, despite everyone telling her it will be all right. I found the story too vague, and there’s really nothing about the character other than the fact that she isn’t happy about what’s about to happen: nothing about her life, or any reason to be concerned other than her ruminations and fear about what might happen to her. The story would have worked far better if we had known enough about the character to feel for her.

“The Carbonite’s Daughter” is set in a post-apocalyptic world where people live in caves as refuge from a nuclear winter. The protagonist is a girl who had been deemed worthy of reproducing, and who is taking a train to Queenstown, a resort that those who still have their health are allowed to visit. But there is a problem: her father is a Carbonite, a religious sect that is against the mining of coal, and thus a criminal. Deryn Pittar is trying to make a point about the stress religion puts on families, but it is not as much dramatized as added as an afterthought. The setting is nice, but the story doesn’t amount to much.

Tim Major contributes “Like Clockwork,” in a steampunk tale where Mick Votel is a mechanic in a world run by Mr. Ransome, a benevolent leader who works to keep everything running. But one day there is a problem with Mr. Ransome’s train, and Mick finds out there’s more going wrong than what seems at first. The story is longer on setting than plot logic (no one considered that this might have happened?) and has a shrug-it-away ending.

“KFP” by George Sandison has Mr. Goldberg waking up after an accident, unsure of where he is. It’s some sort of hospital, but he’s kept in the dark until a new man is sharing his room, eating some fast food with a logo from KFP. The story is a revelation story, where the entire point is to reveal a mystery, and Goldberg takes an inordinately long time figuring out what the reader should suspect halfway through. Even at the end, he gets no explanation and it seems very strange that no one bothers to explain anything to him from the start. The real problem is that the end of the story is really the beginning, and there’s a far better tale to tell from that point on.

We move into horror territory with “The Calling.” Josiah’s son Sammy has been kidnapped by his cousin Zeke, to bring him back to Josiah’s family, a place that Josiah has been avoiding for years. John W. Oliver paints a family with a horrible secret, but not horrible enough to make the story memorable.

It’s cyberpunk territory in Mark Rookyard‘s “Robert Fairweather and the Wrong Ticket,” where the title character meets an intriguing woman at a train station and, on a whim, joins her on her journey. Miss Hattinkin is smart and every bit a modern heroine in a Victorianesque society that is suffering from the aftermath of a war with new scientific weapons. Miss Hattinkin is well drawn and Fairweather is also a good character and this seems much like the beginning of a series of stories documenting their adventures. The problem is that this adventure is pretty routine and essentially has Clark Kent take off his glasses at the end to be revealed to be Superman – that is, it’s far too easy. It’s another revelation story at heart, and the adventures both before and after it would be far more interesting.

SQ Mag is to be commended for trying to help young authors, and has some new ways of looking at things (I especially liked that the table of contents specified the subgenre of each work). But, while good for authors, it needs to offer more to the readers to make sure the works get an audience. None of the stories is actually bad, but, other than the featured piece by Barron, they all need work to be fully fleshed.

Chuck Rothman’s novels Staroamer’s Fate and Syron’s Fate were recently republished by Fantastic Books. His fiction recently appeared in Analog and will be appearing in Daily Science Fiction.