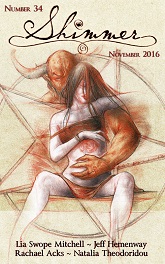 As with all things on the internet, this month’s issue is a mixed bag. While the mechanics of the writing are top-notch (as always with Shimmer) the mix of stories here is uneven. Literary fiction is hard, and adding the fantasy/sf/horror genres to the stew adds a measure of difficulty that is just too much to overcome for some.

Rachel has a bit of a devil problem. No biggie, just that she can see him and the things he does. In Lia Swope Mitchell‘s “Skills to Keep the Devil In His Place,” Rachel and her new friend, Julie, must reach an accommodation with the Dark Prince or risk the consequences. Julie has a secret for dealing with him; though, but as Rachel finds, sometimes the cure is worse than the disease.

Okay, I’ll start with the good—this is a well-crafted and engaging story, with two (three if you count Lucifer) strong characters. Now the bad. I didn’t care for the obvious rape undertones to the story. Worse was the idea that the two young girls would come to like the treatment from their abuser. Add to that the idea that the two are somehow martyrs for their willingness to give in to the abuse to keep their friends and family safe, and you have a recipe for an obscene twist on what should have been a story of empowerment. It’s possible that, like an onion, there are layers of meaning here that I am not finding, but when one of those layers contains the moral equivalent of raw sewage, I tend not to peel further. Pass.

“Number One Personal Hitler” by Jeff Hemenway is a nice time-travel/alternate universe story with very little in the way of the usual twists and turns. This is a good thing. Everyone knows that the first thing you do when you get a time machine is go back and kill Hitler. But then what? It seems that everyone has their own personal “Hitler,” and dealing with this is where problems begin to mount.

In each time travel story there is the possibility of a causal loop. Those events that need the result to create the cause. What’s refreshing is that Hemenway doesn’t fall into the trap, so much as embrace it. The loop, therefore, is the point of the story, and is all the better for it. Nicely done, and recommended.

“Spirit Tasting List for Ridley House, April 2016” by Rachael Acks is a story about lives lost, unrequited love, and the psychopath that connects all the spirits of Ridley House. Like a wine tasting party (and equally pretentious) the guests are invited to sip the last of the spirits inhabiting the home, tasting the final moments of their lives and deaths.

At first, there appears to be no story here at all, but in the end it is a mystery wrapped in soft horror. Here, though, the reader is invited to play lieutenant Columbo on Acks’ journey toward the truth behind the deaths of Ridley House. Everything is there, from start to finish, and the end is as satisfying as the finish of a good wine (or so I’m told). Can you taste the truth? Recommended.

A tale of war’s aftermath, “Now We’ve Lost” by Natalia Theodoridou is not so much a story as stroll through the horrors that follow, though told like someone reading the day’s weather report. Somehow, that makes it all more horrible. The POV character is left behind, picking up the pieces of her life after the war is lost, when a strange man enters the village. Throw in a mysterious mummy, and you have the makings for some dark storytelling.

Unfortunately there is more beautiful word painting here than story. I get that returning to normalcy is difficult after war, and even with a veneer of such, there is still much of the abnormal lurking just beneath the surface. The problem here is that, as a teacher of mine once said, “it’s too much work for so little profundity.” The writing is indeed beautiful, but that’s not enough to save it.

Clancy Weeks is a composer by training, with over two-dozen published works for wind ensemble and orchestra—his most recent work, “Selene,” was premiered in Houston on April 3rd, 2016—and an author only in his fevered imagination. Having read SF/F for nearly fifty years, he figured “What the hell, I can do that,” and has set out to prove that, well… maybe not so much. His first short story, “Zombie Like Me,” will appear in an upcoming issue of Stupefying Stories. He currently resides in Texas, but don’t hold that against him.