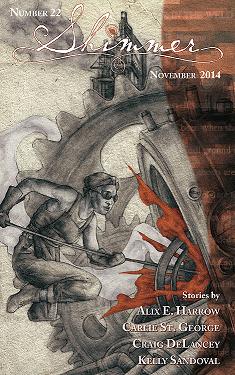 “A Whisper In the Weld” by Alix E. Harrow
“Caretaker” by Charlie St. George
“Cantor’s Dragon” by Craig DeLancey
“The One They Took Before” by Kelly Sandoval

Alix E. Harrow’s “A Whisper In the Weld” is the highlight of this issue. The story follows Isa, a ghost observing and remembering her family and her life’s work. The steel mill where Isa worked during World War II and died feels sooty and hot with the intensity of both her anger toward it and her need for the work, and becomes the second star character in the story, a red giant star, just about ready to go nova. It burns up the lives of everyone who enters it, sucking them in and turning their families into charcoal (sometimes literally, other times figuratively) to support the war effort. The story smelts away the lies of wartime propaganda and gets at the truth of the brutal effects of heavy industry on lives, loves, and families.

Charlie St. George’s “Caretaker” is about me… or maybe it’s about you. Probably depends on your point of view. Apparently, you had a rather sad upbringing, and your mother has some sort of dementia, making her unable to get through most days without help. You’re also fascinated by listening to Catcher in the Rye on audio book… oh, and dead women appear at your feet in the evening and you take it upon yourself to go bury them. Maybe you’re a serial killer? Or maybe you’re a psychic sinkhole for suicides of a particular gender? This one wasn’t for me. Maybe I didn’t like being told who I was, or maybe I just missed the point. I never understood people’s fascination with Catcher in the Rye, either.

“Cantor’s Dragon” by Craig DeLancey presents a dilemma of logic, mathematics, and religion. While mathematician Georg Cantor mourns the passing of his son, he takes a vacation from his sanity long enough to encounter a dragon which has been plaguing him, living in the walls, singing from the rooftops. This infinite dragon is both a being and a pathway to a heavenly rest, one that nobody can ever reach. Fortunately, Cantor realizes infinities come in all different shapes and sizes, and he uses that knowledge to teach the infinite dragon a lesson in humility.

Kelly Sandoval imagines our technological world still exists alongside the world of faerie in “The One They Took Before.” Kayla secured her release from the faerie world of immortality, sexuality, and inhuman depravity when they finally broke her and she refused to play music any longer. She seems constantly tempted to return by unspecified emotional drives she fights hard to control, and she discovers that the human world is full of references to the craziness of faerie activities in online message boards, in the news, and even on Craigslist. Kayla’s inner struggle over her desire to return to the faerie versus her fear of them seemed somewhat disconnected from the main story because she shares very little of her experiences in the faerie lands, but the story has a charming, urban fantasy atmosphere while maintaining the classical underpinnings and mystery of faerie stories.

Harlen Bayha lacks hair, humility, upper body strength, and pants. Fortunately, none of those things are required to write his own fiction.