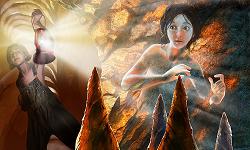 “Tangible Progress” by Edmund R. Schubert is a fantasy about an 11-year-old girl named Gabrielle, who’s a member of a Rem’n tribe from the Shenandoah Valley. The Rem’n are a “cursed people” who secretly hunt werewolves during the full moon but who turn “intangible” during the new moon. Gabrielle’s mother warns her daughter to stay away from strangers while she’s in her nearly invisible state, but the rebellious girl wants nothing more than to meet an outsider, or estraneos as the Rem’n call them. Gabrielle gets her chance when she discovers a young boy who’s lost in a cavern. But she soon learns that relationships between Rem’n and estraneos can be a bit complicated.

“Tangible Progress” is a well-told story about belonging, being an outsider, and the desire to connect with the “other.” Sadly, we get no werewolves, but I have my fingers crossed that this will be remedied in a sequel.

Michael Greenhut‘s “Last Resort” takes place in an alternate-reality prison world. After a plague has wiped out most of the inhabitants on Earth Alpha, the men and women who orchestrated the apocalypse are each imprisoned on their own desert island. Stephen is one of those prisoners struggling to survive on his “permanent vacation.” After attempting suicide, he discovers a seashell that allows him to communicate with the woman who designed his beach prison. The woman, Andrea, along with her two daughters, is on her own beach, though it’s not a prison to her. Her eldest daughter complicates matters when she decides the evildoers aren’t being punished enough.

Greenhut’s writing is low-key and subtle. It took a second and third read for me to understand all that was going on and still I found a few questions unanswered. Regardless, it’s an enjoyable and unique story that explores some interesting questions about responsibility and technology, punishment, redemption, and the idea of what constitutes a prison itself. Overall, though, it seems to be saying that we’re all connected, what affects one affects the other. One person’s beach is another’s prison, or vice versa.

“Wet Work: A Tale of the Unseen” by Matthew S. Rotundo reads like an episode of The Celebrity Apprentice, if Donald Trump was ever replaced with a slightly more demonic host. In this dark fantasy, Ellie and Keith compete in the final challenge of a contest overseen by Lord Dontur, a high-order demon of The Unseen. Ellie and Keith are both Stalkers, whose main job is to lure rich people into dark alleys to be consumed by sinister creatures. To win the contest, the two Stalkers must find, among the rich folks assembled at a mansion on Halloween, the person with the most “suitable” offering in return for a favor from Dontur. As you can imagine in a story involving demons and their minions, things don’t end well. At least for most of those concerned.

“Wet Work” is the most straight-forward tale in the October issue. It’s a fun and exciting story and probably worth a follow-up story or two — unless, of course, Donald Trump catches wind of it.

Sarah Grey‘s “Southside Gods” is set in a world where deities work as tradesmen. Holloway, whose element is water, is a whiz at repairing washers. But when his client, Mrs. Goodwin, needs her air conditioner repaired too, Holloway goes on a journey to procure the services of Ortega, the local god of wind. Ortega isn’t up to the challenge, though, so Holloway has to weave his magic to persuade him to take the job.

“Southside Gods” is a marvelously quirky tale. Written in taut, punchy sentences, this short short story flashes by like a thunderbolt launched by Zeus himself.

“The Sweetness of Bitter” by Beth Cato follows a mother as she desperately struggles to save the simulacrum of her dead daughter in a post-apocalyptic world. Armed only with a nine iron, Margo searches for the headquarters of Simulated Innovations, where she hopes to recalibrate her daughter’s failing nanites, and hold on to the last shred of her former life.

This is by far the issue’s stand-out story. It is a bittersweet tale (as the title suggests) of a mother’s love and loss. Cato takes the reader on an emotional roller-coaster that is at turns heartrending, creepy, and, ultimately, hopeful. This is how storytelling is done. Highly recommended. (Kleenex recommended, too.)