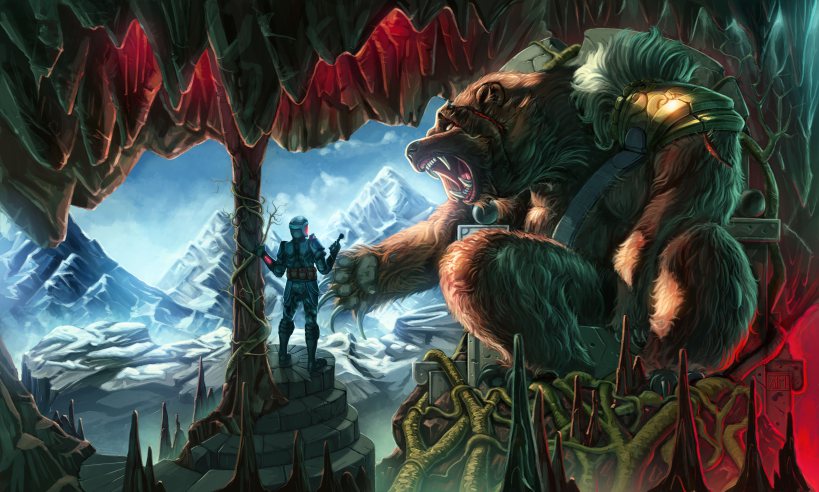 “Inside the Mind of the Bear” by Rahul Kanakia
“The Probability Flatline” by K.G. Jewell
“The Flittiest Catch” by Robert Lowell Russell
“Always Here” by Ken Liu
“The Postman” by Ken Liu

“Inside the Mind of the Bear” by Rahul Kanakia is written as a philosophical essay analyzing the appearance of the Bear, a gigantic bear with increased mental and physical prowess. The tone of the piece mimics an essay so well that after the first paragraph I went back to double check that I was reading a story and not an article. Like any good essay, this one uses quotes and summaries of reference material (all made up, of course) to support its conclusions, and it is in this fashion that the story of the Bear comes to the reader. This unusual format makes the unreliable narrator’s opinion as much a part of the story as actual events, if not more. The layers this creates challenge the reader while at the same time reminding us that the idea of the Bear may be more important than its singular life events.

The tone of “Inside the Mind of the Bear” rests on the edge of parody, where on the one hand I want to laugh at reporters treating this giant bear like he isn’t going to maul them all to death, and on the other hand, the Bear has a frighteningly extensive vocabulary and reasoning ability, which invokes hope in compromise. We tend to focus on animals’ lower intelligence as the reason for our conflicts with other predators, yet the Bear remains in conflict with us even after being elevated to – or above – our intellectual capabilities. Kanakia has done something brilliant in taking a familiar territorial enemy and changing only the part of him that ensures our superior fire power. It reminds us that even the creatures that surround us every day are in some ways incomprehensible to us simply because they are not us. We would love to believe that superior reasoning can be used to bring people together in mutually beneficial goals, yet the Bear reminds us that it often does not turn out that way. Plenty of smart people hurt others for a variety of reasons, usually related to the perpetuation of their individual self or of their genetic or cultural group.

This is a highly unusual story with the potential to blow your mind. Being versed in philosophy is a plus but not a strict necessity.

“The Probability Flatline” by K.G. Jewell starts with a dying robot, Aftan, trying to elicit help in an alley before her backup power runs out. A business robot agrees to give her the DC power she needs on the condition that she break the law by taking him to see human children. As they commit this crime, the reader gets a crash-course in the world’s history and its current politics. Plot wise, the drive of this story is action. Interest wise, the reader is treated to a plethora of related world-building details and intense moral conundrums.

From Aftan’s first person perspective we immediately get a sense for how robot sentience works in Jewell’s post-apocalyptic world. In a fashion eerily similar to human mental processing, Jewell’s robots run probability scenarios that inform their decisions, and once these probabilities become irrelevant, the outdated scenarios are purged to free up space. These processes color the entire text, never letting us forget that our protagonist is not human, despite her programmed attachment to the children.

I love that this story starts with a character in desperation because it shows that Jewell wastes no words getting to the action. Then when we do learn about the world, this knowledge serves to make the character’s circumstances and actions even more intriguing. This story has so many of my favorite things in it (robots!), but with a differentiating twist. “The Probability Flatline” asks how humans would fare after a robot take over, and the unusual answer is one you’ll just have to read it to find out.

“The Flittiest Catch” by Robert Lowell Russell begins with an interview with a captain on a very unusual fishing boat. As he is explaining the dangers of the job, the interview is interrupted by excitement on the deck. The title and setup are a parody of reality TV shows like “The Deadliest Catch.” This flash piece is a lot of fun and almost everything about it is a spoiler due to its length. Let’s just say that the illustration shows an old guy with a long beard suspended from a balloon under the fishing blimp. And just in case you were trying to take it seriously, the story even ends on a pun.

“Always Here” by Ken Liu is the bittersweet first person narrative of a young man who begins hearing the voice of “Anna” as a child. After he makes the mistake of telling his parents and is subjected to psychological evaluations, the narrator attempts to live life normally with Anna as a secret handicap.

This flash piece manages to cover a lot of time and dialogue in under 1000 words, which alone deserves recognition. Because of its length, some of the character’s life decisions and other huge events are grossly glossed over. This fits the theme, keeping the focus on his relationship with Anna, yet it may frustrate some readers. The ending is open-ended but also fits the lens of the story.

“The Postman” by Ken Liu tells the story of an alien creature sent to contact human seed ships. The humans’ quest to seed the universe has been outdated by the alien species, who is stronger, faster, and generally more adaptable than the human race. So adaptable, in fact, that the narrator does not even need a spaceship or a suit of any kind to move through space and attach to the hull. It is from his place on the outside of the ship that he listens in on the fragile yet brave humans, reflecting on the value of his own mission.

I appreciate that the plot is in the vein of classic scifi but this story just doesn’t wow me. The alien narrator doesn’t do much action-wise. To be fair, there’s a lot going on in the story because of the multiple layers. Momentous things do happen, it’s just that they are enacted by the humans who are the secondary characters. I could see the entire story serving as setup for something with a bit more action.