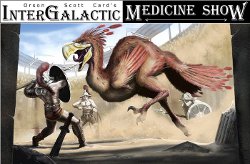 “The Butcher of Londinium” by J. Deery Wray
“Riding the Signal” by Gary Kloster
“Cloudsinger” by Jared Oliver Adams
“For Lenore” by Kenneth Kao
“Dark and Deep” by Holli Mintzer
“The Flower of Memory” by Michael Haynes

“The Butcher of Londinium” by J. Deery Wray

Caro Carvetti is “The Butcher of Londinium” in J. Deery Wray’s story about a serial killer sentenced to death in the “Colosseum.” Carvetti is spared and put to work as surgeon for the gladiators wounded in arena combat. As he gains favor among those in charge of the arena, he also comes face-to-face with the husband of one of the women he killed in a less-than-memorable climax.

Wray employs all the usual tropes: a serial killer who only targets those who deserve it; a serial killer who is saved by his inherent skills; an encounter with the ramifications of his past; and a conclusion reliant on a single phrase meant to be universally meaningful. While Wray’s writing is not altogether unenjoyable, it has no style or flare, but moves the story along on its expected path until its expected end.

“Riding the Signal” by Gary Kloster

Gary Kloster’s “Riding the Signal” feels like a mix of The A-Team and Avatar. Alec Chu commands a monkey-bot as part of a group of well-intentioned mercenaries. Their secret base is The Hole, a high-tech, underground bunker/facility. While recuperating in The Hole between missions, they are attacked by a similar bot and believe it is vengeance for a botched mission years ago.

The group is comprised of the usual archetypes that don’t get along, but because the story is so short, there is no development of the group’s dynamic. Kloster’s writing is mostly solid, but there are too many liberties taken with diction trying to sound colloquial that it is difficult at times to understand what sentences mean.

Jared Oliver Adams creates a new art form in “Cloudsinger.” Case is a cloudsinger – a bard of sorts – able to use the sky as his easel and paint with clouds to tell folk tales. The focus is on the story he is telling, about an archer-turned-king, betrayed and lost to history. It is the kind of tale expected to be told within a fantasy story, and its ramifications are nothing new.

Adams writes clearly and without the need to sound like a dusty old tome. It is a refreshing style for the genre and allows a lot of life to be breathed into the cloudsinging. The plot has no conflict, no climax, and does nothing to place the cloudsinging – the most intriguing aspect of the piece – in the spotlight. It becomes a means to tell a story within a story and has no value in and of itself. This feels like a missed opportunity, but also an opportunity to do something more meaningful with the setting.

“For Lenore” by Kenneth Kao

The unnamed protagonist in Kenneth Kao’s “For Lenore” is a rift-bomb diffuser. In his world, small black orbs of antimatter appear from whereabouts unknown, exploding catastrophically. On this day, the orb is different and begs him to think of his faltering relationship with his wife, Lenore.

The science is loose and unfulfilling. The characters are without character. And by the end of the story the reveal is too farfetched to be believed, resulting in a rather pointless read.

“Dark and Deep” by Holli Mintzer

Holli Mintzer’s “Dark and Deep” is good storytelling and that makes it difficult to discuss. There is a cabin in the woods, there are two sisters, they are witches, and Miller is a man expecting a child that just wants to make sure his wife survives the birth. That is the seed of “Dark and Deep,” and to say any more would spoil it.

What can be said is that Mintzer creates a very specific setting without using specifics. Characters are given personality through dialogue and action, not statements. It is good fiction. A review feels hollow in comparison.

“The Flower of Memory” by Michael Haynes

Michael Haynes’s “The Flower of Memory” is a short piece of prose fiction, but it functions more like poetry. There is no beginning and no end, but a scene taken from the lives of a father and daughter mourning their wife/mother. The moment is the focus and the message is the point. What that message is will be up to the reader to decide, much like with poetry.

The setting is reminiscent of Cormac McCarthy’s The Road. A harsh, long winter is the norm, technology is no longer effective, and danger may be lurking in the shadows, creating a sense of isolation. But these are stated as facts and are not integral to the story at all, save for the somber tones not uncommon to a winter setting. In the end, there is mourning and a memory and little else.