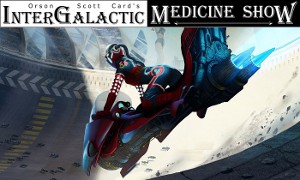 “The Curse of Sally Tincakes” by Brad Torgersen
“Blank Faces” by M.K. Hutchins
“The Snake King Sells Out” by Rahul Kanakia
“Paper Airplanes Into the Void” by Terra LeMay
“Master Madrigal’s Mechanical Man” by Scott C. Mikula
“Calling the Train” by Jeff Stehman

“The Curse of Sally Tincakes” by Brad Torgersen

A trademark statue welcomes fans through the entrance at the Cazetti racetrack. Sally Tincakes is the nickname for the retro-starlet-style statue of Frank Cazetti’s young wife.

Old Bill is Jane’s crew boss. Bill tries his best to dissuade Jane from racing because his own daughter, Ellen, died there in a horrific crash. Jane, however, will not be discouraged. She is determined to be the first woman to win at the Cazetti track.

It seems owner, Frank Cazetti was a bit of a womanizer. His beautiful wife, Sally found out and divorced him, but not before putting a curse on the racetrack. Ever since then, every female driver has crashed and died.

Does Jane win? Does she survive?

Jane lifted a hand weakly and scratched at the window with her fingertips.

She weakly depressed the stud on the gurney . . .

This story contained a distracting number of detrimental adverbs – not just a few – but throughout the entire story, increasing in number and inanity toward the end.

The people in this western mining town might be flesh and blood or they might be mechanical. Some of them are horse thieves, shopkeepers, prostitutes, or pan for gold. Some dig up old Indian bones. The bones are more valuable than gold, but it’s believed they are contaminated with a chemical or a curse, something that causes vision problems. Faces tend to blur or appear to be missing features.

The unnamed protagonist is broke, hungry, cold and wet. He was already kicked out of the saloon for stealing a drink and is in danger of being shot by snipers on the rooftops. The snipers are hired by shop owners. The protagonist thinks of himself as a gold miner, but he’s been known to dig for bones and has trouble seeing people’s faces.

He enters a shop to escape the cold rain. The shop owner is Miss Annie. She’s pretty, dresses well and exhibits exceptional manners. She wears an embroidered, lace-trimmed eye patch and is assumed to be a former slave. He is always surprised by her quiet way of allowing him to ‘browse’ when he often steals from her.

This is a character study. It’s about good and evil. It’s about human nature and how, sometimes, a mean-hearted scoundrel never changes, never learns from his mistakes and is never grateful for a kindness.

The ending wasn’t a total surprise. It was a bit too realistic to be considered satisfying, but it was a good story, well written.

“The Snake King Sells Out” by Rahul Kanakia

At the start, Perry is a Snake King, but after long consideration he files down his horns and scales and passes for human. He travels to another city after he: “blackmailed two snake lovers, humans based in big companies back in San Francisco, into acting as his references. He got a job at an insurance company.”

Perry becomes a valuable employee and dedicates himself to working hard and being accountable, until homesick, he resigns and heads back to San Francisco. There, he discovers he is no longer a king, no longer respected or taken seriously. Perry accepts this because he made the decision to change and the change weakened him. Perry believes there is a positive future for the next generation of Snake Kings.

Digging into the myth base, you’ll find this story links to the mythology of Tiresias. Tiresias’ tale of transformation began when he separated two mating snakes for no apparent reason. Instead of poisoning Tiresias with indignant venom, the snakes magically transformed him into a woman. The transgendered Tiresias wasn’t happy with the procedure, but lived with it for seven years before figuring out a technique that would either kill him or reverse it. Since striking the snakes had worked before, he tried it again − this time with at least a legitimate motive. It worked, and he became a man again. A character who has seen both sides of the red river is always more interesting than the one who has not.

A satisfying story doesn’t always need to have believable, fleshed-out characters, or a strong beginning, middle and end – it needs to adhere to the myth base. This story does, but it could have done more.

“Paper Airplanes Into the Void” by Terra LaMay

Jared arrives at the edge of the world. Beyond the edge there was nothing to see except fog and in the distance, the ocean pouring into the depths.

“Noise echoed up from the void. Music, and indecipherable but distinctly human voices. There were people down there. Or out there. Somewhere. They talked to each other. They sang. They argued and cried. They played radios, car stereos, ipods with speakers, or who knew what.”

“People had jumped. With parachutes and without. People had flown aircraft out there, planes, hang-gliders, helicopters. People had thrown ropes over the ledge and attempted to climb down. No one ever returned.”

Jared hopes to find his parents. The day after his birth, his parents rented a hot air balloon and never returned from the Void. They left a note beneath Jared’s infant body for the nurse to find. The note contained the address of Jared’s grandmother.

Jared has a lifetime stash of letters he has written to his parents, the first letters scrawled in crayon. He has saved them all and wishes for a way to get them to his parents. Jared decides to buy a hang glider from the man who rented the hot air balloon to his parents. He learns there’s a waiting period: pay now, fly tomorrow. This gives the daring voyager a chance to reconsider.

Jared observes a young man claim a hang glider paid for the previous day. The young man gets all the help needed from nearby picnickers and tourists. The young man launches into the fog and doesn’t return. A young woman runs up, pays for another hang glider, but she never shows up the following day and the seller offers it to Jared.

Instead, Jared walks to the edge of the Void and sits down. He folds all his childhood letters into paper airplanes and tosses them into the fog. Afterward, he pays the man who sells kites, hang-gliders and hot air balloons. It seems his parents rented a hot air balloon, floated into the void attached by a tether, and severed the tie once they were out of sight.

This felt like the contemplation of suicide except with a healthier, happier ending.

Perfection. Winning is not enough for some. In the gladiator arena, with one human pitted against an automaton, the human must be exceptional. He must be quick and limber and yes, exceptionally strong. But there is more. While in the midst of battle the human must spot any weakness in his opponent, with a mere second to spot it, and he must be adept enough to take advantage of it.

Cetta was twelve years old when she persuaded her mother to send her to her uncle Madrigal, after his illness. It should have been temporary, but his palsy worsened over the years. Girls did not apprentice to craftsmen like Madrigal. Once there, she helped her uncle build the automatons. She was gifted but her intelligence and opinions were ignored. She spotted the weaknesses in her uncle’s fighting machines. As amazing as they were, the automatons were imperfect. She could not be satisfied until perfection was achieved, so Cetta sabotaged a tournament by telling the human opponent about the machine’s single flaw.

“Our mechanical man could have bested (the human) today. It could have earned the champion’s laurels and the thousand crown prize from the duke. That might be enough for my master, but it’s not enough for me. He can hit me, he can belittle me, he can pretend I’m worthless. None of that matters. What matters is that when we’re finished, Madrigal and I, our mechanical man won’t merely be the best – it will be perfect.”

“Calling the Train” by Jeff Stehman

Sam was chasing evil men when he was mauled by a giant alligator in the swamp. He now lies on the shore in the mud and in the distance he hears a train whistle.

A dark, upside-down face with grey hair appears above him. “Ouch. Gator must’ve been huge.” The old man stepped to Sam’s side, raised a harmonica and sounded the mournful wail of a train.

Sam says it can’t be a train here in the swamp. There are no tracks.

Sam bets he can call the train better than the old man. If he wins, he stays and the old man gets on board. The old man agrees.

Sam’s no slouch at playing that instrument. And sure enough, the train rumbles up and stops.

“The train come to fetch your soul,” the old man says.

“Takes more than preacher man pouring water on your head. You gotta believe, and you and I both came up short.”

The best two lines, right there. This was the shortest and the most entertaining story in the entire issue.