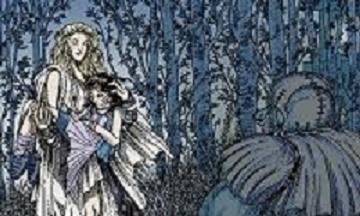 “The Discriminating Monster’s Guide to the Perils of Princess Snatching” by Scott M. Roberts
“Four Wizards and a Funeral” by Mike Rimar
“This Is My Corporation, Eat” by Lon Prater
“The Hanged Poet” by Jeffrey Lyman
“Into the West” by Eric James Stone

This month’s medicine show trundles into town with a mix of fantasy and science fiction that tends towards the fantasy and the light-hearted.  So, what’s the snake oil, and what’s the Genuine Miracle Tonic (© 2559)?

The opening story, “The Discriminating Monster’s Guide to the Perils of Princess Snatching” by Scott M. Roberts, follows Vren, the sinister yet likable monster whose talons, fangs and predator’s nose hide the fact that he has a wife and two kids at home.  His abduction of a modern princess with a delicious destiny does not go according to plan.

It’s as much a cliché of the modern fantasy genre that princesses are strong, independent and will at some point kick someone in the nuts, as the passive princess waiting for Prince Right was of older fantasy and its precursor fairy tales.  That said, Roberts does a nice job of creating his own world with its own rules inside the mundane one we live in.  His monsters hunger for destinies; a nice way of making them family friendly creatures that don’t really hurt anyone and instead do something nebulous to the past, present and future.  As Vren points out, not all destinies are good ones.

The story meanders occasionally, lingering over lengthy detail for only small narrative payoffs, but the writing and characters are engaging enough that you don’t really hold it against the author.  An enjoyable romp for fantasy fans.

“Four Wizards and a Funeral” by Mike Rimar is, as the title suggests, another whimsical piece of fantasy.  Structured as an unconventional whodunit, the undertaker tasked with preparing the remains of a powerful wizard (coincidentally given the same name as the main character of “Into the West”) finds himself torn between four powerful wizards, each with different designs for the body of their ex-leader.  His life at stake, he must find a middle-ground between the four that will either satisfy them all — a seeming impossibility — or do something else to save his life.

The story is a puzzle, and part of the pleasure is trying to work out how our oppressed undertaker will work his way out of the trap he finds himself in.  Unfortunately, the puzzle is spoiled because not all the pieces are on the table.  Rimar does lots of work to give the reader all the necessary pieces, explaining as much as he can in the limited context of a short story, and ends up using info dumps to accommodate this.  Unfortunately, by the end I still just didn’t have enough facts to work things out and felt a little cheated.  The eventual solution to the puzzle ended up being annoyingly simplistic.  Overall, I liked the idea of a wizard’s undertaker, but was disappointed by the story.

Lon Prater’s “This is my Corporation, Eat” is the first SF offering in the issue.  The title and most of the story reminded me of a saying from one of the world’s greatest contemporary philosophers: “Mmm, sacrilicious.”  The story is, indeed, sacrilicious, melding the sublime and the base with uncomfortable ease.

In the story we’re presented with a future where Christianity is heavily commodified, and only the extremists think anything should be different.  The amusing central premise provides the occasional giggle, and the author’s inventiveness when it comes to capitalizing on the joke is appreciated; why aren’t we all drinking bottled holy water anyway?  Probably because the stuff you find in fonts is as polluted as it is sacred.

In contrast to the diverting mix of capitalism and Christianity, the story deals with the tough themes of fundamentalism and terrorism.  The humor exists uncomfortably alongside the horror.  Rather than acting as counterpoint or creating the sublime ridiculousness of  “A Modest Proposal,” the mix ends up, I thought, cancelling each other out.  Nevertheless, it is a fascinating juxtaposition of different elements, and the major themes are deep and engaging.

I liked the story, and found subtlety amongst the deliberately farcical elements.  The main character didn’t ring very true, having a fairly major change of heart with not much to motivate it.  However, overall the piece is a nice example of good-ideas-SF.

“The Hanged Poet,” despite being a short story, gives the sense of an epic fantasy world extending well beyond the boundaries of the story.  This is quite an achievement when the story is, ultimately, told entirely through dialogue between two people, with only one of them being alive.  Jeffrey Lyman did an excellent job maintaining my interest in the two talking heads and the large empire they paint with their discussion.  The large amount of background required to make the story work came naturally and smoothly.

General Veritas — an Othello-like character who is heading home for a well-deserved retirement after a lifetime serving the Lord Emperor — is halted on his journey by the titular hanged poet, Theseda Ys.  The two discuss the empire and their respective roles in shaping its destiny.  The underlying message is of the power of poetry to change people and history.

Lyman makes a number of brave decisions in the process of telling this story.  As mentioned, the action is sparse and the story moved forward with dialogue.  The narrative hinges on two particularly efficacious poems, and I was pleasantly surprised to find the author include them rather than write around them.  It’s a fine line between bravery and foolishness, and after the build-up he gives the poems they can’t help but be anticlimactic.  The rough iambic trimeter of Theseda’s verse gives it a lyrical feel, but doesn’t make for good poetry.

After reading the story, I found I admired it greatly, but didn’t enjoy reading it all that much.  Overall, an interesting story that is, in itself, a paean to poetry.

“Into the West” by Eric James Stone is a brief piece in which a nebulous scientific disaster causes everyone not moving westward to freeze in time.  The central idea is a fairly soft science fiction concept; it’s hard to see why that particular direction would have such drastic effects, or how life would be possible at all.  How could you see the things in front of you if light can only move in one direction?  Can you get traction against a surface that’s not moving in time?  The sole of your foot is not moving west when you walk, does it freeze and then unfreeze?  Why is the GPS still working?  Is the satellite moving west?  Or is it a local effect?  The choice probably has more to do with the themes involved than science; moving West is a powerful idea in American culture that resonates with the idea of progress, exploration and colonization.  It’s an interesting choice in the year that sees the end of the space shuttle program.

“Into the West” is brief and more tightly written than the other offerings in the issue.  The constant movement of the people is matched with more personal motifs of moving on and leaving the past behind and with the dilemma of loved ones left behind.  Stone weaves the elements together smoothly creating a tight piece.  If you like your SF hard, you might spend a lot of time scratching your head, but if you can make the leap, then this story is a decent offering.