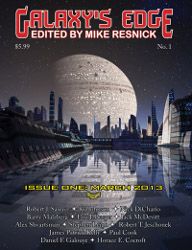 Nick DiChario’s “Creator of the Cosmos Job Interview Today” is a delightful tale about creation and its Creator who must remember who he is to start creation, then forget for it to play out its purpose. The Creator must do this for each day-long cycle of the universe’s eternal existence. But then, how long is a day, and, more metaphysically, did creation make the Creator to ensure its continuation? Highly recommended.

In “Just a Second,” by Lou Berger, Frederick Thomas, a womanizer, stumbles into a curio shop and, on a whim, agrees to “buy a second” for $100, not really believing that the potion is anything more than water. But he’s pleasantly pleased to discover that his days are changed—his commute is faster, he closes deals quicker causing his commissions to jump. He decides to buy another second. $1,000. It’s worth it. He breaks sales records, his wealth soars, life is excellent. The SEC investigates his success but finds nothing amiss. The allure of even more brings him to buy a another second in spite of the curio shop owner’s cautions. However, it’s not until he steals the last second that he learns the true cost of yielding to temptation. An interesting story, but something about the end just didn’t work for me.

In “Requiem for a Druid,” by Alex Shvartsman, Conrad is a con man, sort of. He can see magic, and does it very well, but can’t cast it, and his colleagues and boss at the Watch don’t know this. For years he’s pretended to be a badass wizard, relying upon a plethora of charms and amulets to make up for his limitations. Now he’s been hired by a New York real estate magnate to ferret out who’s behind the magic that’s interfering with a huge theme-park development project adjacent to Marine Park. When he discovers a group of Druids that survived a centuries-long purge by the Cabal, he must determine a way to preserve the last resting place of the queen of the Druids, fight off the Cabal and make the development project successful, all while protecting the secret of his inability to cast magic. Quite entertaining with strong characters, a fast pace, and a compelling battle between magics at the end. A definite read.

Steven Leigh’s “The Bright Seas of Venus” is pure rush, a satiric commentary on the aficionados of e-text who refuse to read anything in print and decry anything not electronic. “Fantasy—at least the dark, horrific, and nasty kind—is all too real. And it hates you.” Here’s its message:

“All I had to do was watch you…and figure out when you were going to download this particular magazine, and run my little program. Poof! There goes “The Bright Seas of Venus”—which, by the way, is an incredibly mediocre story without any redeeming literary value; I have to believe that the editor bought it only because this Leigh guy is a friend of his—and that eminently forgettable but sadly much longer story is replaced with this one. My story. Which, incidentally, you’re the only one reading, as everyone else who is looking at this issue gets to read the tedious “The Bright Seas of Venus.” At least that’s what happened assuming the program worked as planned. I can’t imagine any of the readers who are stuck with the original story are enjoying themselves as much as I am. For a single good reason. I fucking hate you.”

Stephen Leigh is a prolific writer, with numerous awards, and continues to excel with this story.

In “The Spinach Can’s Son,” by Robert T Jeschonek, a Panelaut, a traveler through the Underfunnies, has chosen to escape his heartache from the loss of his son by disappearing into this abstract world. Except his wife, Molly, in as much pain as he, goes searching for him, chasing him from comic strip to comic strip until he at last draws her to their final destination. Here he has engineered a solution to their pain that will rely upon the collective willpower of this dream-like world where human disbelief is suspended. An intriguing and well-crafted story.