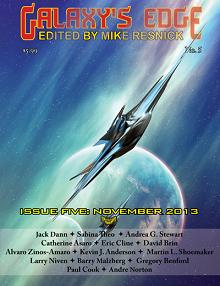 “Love in Bloom” by Sabina Theo
“The Unchanging Nature of Stones” by Andrea G. Stewart
“Would You Volunteer to Kill Wendy?” by Eric Cline
“All Quiet on the Golden Front” by Alvaro Zinos-Amaro
“Il Gran Cavallo” by Martin L. Shoemaker

“Love in Bloom,” by Sabina Theo, is a very short story, told in the first person. The protagonist speaks of a lover who soothes and comforts her, but the story is too short to have much impact.

Andrea G. Stewart‘s “The Unchanging Nature of Stones” tells of Tahrie, a girl who refuses to be bullied into marriage with a being that can destroy her village if she denies its advances. Eventually she convinces the village to move, to escape rather than continue to demand she sacrifice herself to something she doesn’t love. It’s a powerful metaphor for holding on to one’s principles, and effectively captures the tone of a story told as mythology.

Eric Cline‘s “Would You Volunteer to Kill Wendy?” is a darkly humorous account of a secret society who hunts the eponymous ‘Wendys’. The protagonist’s deadpan narration sets it apart from most other stories of its kind, as he is well aware how absurd his tale will sound to outsiders. Even its more gruesome scenes are written with a dry sarcasm that’s outright hilarious in places.

“All Quiet on the Golden Front,” by Alvaro Zinos-Amaro, tries to be a mysterious tale of war, told by a front-line soldier at odds with his command. It tries too hard, however, and the reveal of what the “soldiers” really are is disappointing. The plot itself could have been promising, but the execution is clumsy, leading to an unsatisfactory ending.

Martin L. Shoemaker‘s “Il Gran Cavallo” is an epistolary story, detailing the letters of Leonardo da Vinci to the Duke of Milan. The Duke becomes da Vinci’s benefactor, supplying him with the means to build his Il Gran Cavallo, which is intended to be the best weapon ever constructed by man. Things do not go as planned, however, and da Vinci’s letters to the Duke become increasingly desperate. The deliberately ambiguous (and somewhat humorous) ending fits the story well.