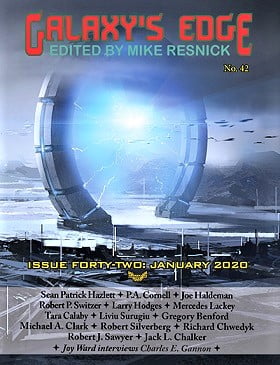 This issue of Mike Resnick’s on-line magazine comes with the very sad news that the editor, a prolific and greatly acclaimed author of imaginative fiction, died after a battle with an aggressive form of lymphoma. The publication will continue to appear, edited by Lezli Robyn.

Given his famous sense of humor, it is appropriate that the late writer’s lighthearted “A Limerick History of Science Fiction” appears in his last editorial for the magazine. It is also fitting that this issue includes “Isaac from the Outside” by Gregory Benford, a free verse poem in honor of the one hundredth birthday of Isaac Asimov.

In “The Pogonip Fog” by Sean Patrick Hazlett, a recently divorced woman joins a small group taking skiing lessons. When they reach the top of the mountain, a strange yellow fog proves to contain a malevolent being intent on their destruction. One by one, her companions fall victim to the unseen creature, eventually leading her to another reality.

This is a gruesome horror story, with little hope that mere humans can escape the wrath of a supernatural monster. The final vision of a different, frightening world adds an intriguing touch of cosmic evil, in the tradition of H. P. Lovecraft. Overall, however, this bloody tale reads like a literary version of a gory movie.

“Kiss it Better” by P.A. Cornell takes the familiar practice of a mother kissing a child’s injury to make it feel better and transforms it into something magical. The narrator’s mother has the power to heal her daughter’s wounds, physical or emotional, but only at the cost of taking on the pain herself. She finally makes the ultimate sacrifice, but passes the ability on to her child. Although there are no surprises in the plot of this sentimental story, its portrait of motherly love is likely to touch the reader’s emotions.

In “Vibrations of the Wishful Kind” by Robert P. Switzer, a woman is able to communicate directly with the universe, which talks back to her and grants her anything she wants. After winning fifty million dollars in a lottery, becoming a great singer and dancer, and gaining the worshipful love of the man she wants, she asks for something unusual, leading to unexpected consequences.

In essence, this is another variation on the old theme of being careful with your wishes. The way in which things go wrong seems contrived. The sardonic speeches of the universe add a welcome touch of comedy.

“Releasing Hitler” by Larry Hodges begins with the infamous dictator winning parole from Hell after one million years. There is only one other damned soul left in the infernal regions, and he is allowed to escape just after Hitler. However, he has his own plans for the Fuehrer.

The way in which the plot makes use of a famous Nazi-hunter as a character may disturb some readers. Despite its fantasy premise, which seems almost whimsical, the story deals with serious themes. In particular, it ponders whether forgiveness is possible for the very worst crimes, or whether evil persons should face equally violent punishments. This potentially controversial story is more daring in concept than effective in execution.

“On Clockwork Wings” by Tara Calaby takes place in Australia in the Nineteenth Century. The narrator’s husband, a toymaker, leaves his wife to seek his fortune in gold mining. The woman has extraordinary skill with bringing her husband’s creations to life through mechanical means. So much so, in fact, that she is able to heal wounded birds by fixing their wings. She goes on to repair the brain and body of a prostitute dying of syphilis, and then performs one final miracle of engineering for herself.

This steampunk fantasy is reminiscent of Mary Shelley’s classic novel Frankenstein; or, The Modern Prometheus in some ways, although the plot is entirely original. Its portrait of colonial Australia is a vivid and convincing one. The narrator’s combination of the biological with the technological leads to many striking images.

In “The Choice” by Romanian author Liviu Surugiu, translated by Andrada Coos and Raluca Balasa, a man finds himself on the Moon, unable to remember how he got there. His spacesuit is quickly running out of air. Alternating sections of narration depict the man walking on the surface of the Moon, without apparent destination, and memories of his life, from early childhood to the tragic event that led him to face the probability of a lonely death.

This story slowly allows the reader to understand the main character’s situation in a compelling way. Its intimate scenes of the man’s dilemma, and the decision he must make at the end, are more effective than its speculative elements. The fact that Earth will soon lose its atmosphere, and that everyone on the planet must escape to Alpha Centauri, for example, is implausible when compared to the story’s realistic aspects.

In “Thin Skinned” by Michael A. Clark, a team of explorers travels back in time to the Cretaceous Period. Their mission is to locate areas that will become sources of petroleum in their own time. Unknown to the others, the team’s two military leaders receive secret deliveries from the future. When their teammates discover their motive, a tense battle of wills begins, with survival at stake.

The author creates a believable portrait of the ancient past and intriguing characters. The plot depends on the fact that one of the explorers has powerful psychic powers, which does not fit well with the rest of the story.

Victoria Silverwolf thinks Mike Resnick’s award-winning novella “Seven Views of Olduvai Gorge” is one of the best science fiction stories of all time.