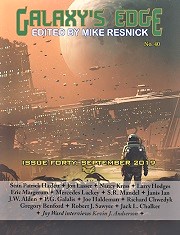 “We Who Flee the Sun” by Sean Patrick Hazlett

In “We Who Flee the Sun” by Sean Patrick Hazlett, a hit man accepts a bizarre assignment. His job is to travel to an isolated house, capture the man he finds there, place him inside a casket, and drop him into a crater in the desert. Things get even weirder when an eerie blue light appears, and local animals behave in strange ways. The explanation for the odd happenings involves biotechnology, leading to a gruesome ending.

This science fiction horror story shows great imagination, although some aspects of it will seem familiar to viewers of zombie films. Even in what seems like the literary equivalent of a monster movie, it’s hard to believe that any form of biotechnology could have so many different terrifying effects.

“Why Humans Can’t Write Fiction: A Review” by Jon Lasser is an ironic mock article in which an artificial intelligence asserts that people are not sentient. The proof involves a reversal of the famous Turing Test, used to detect machine consciousness. This brief, one-joke story may raise a smile.

The narrator of “Death for the Cure: A Comedy about Cancer” by Larry Hodges is a woman who dies of breast cancer. At the time of her demise, the incarnation of Death shows up. For unclear reasons, the Grim Reaper disappears, and she takes over his role. In addition to her duty of sending souls on to their final destinations, she also raises money for cancer research by delivering pizza. This doesn’t quite work out, so she comes up with a much better plan.

The author manages to take a premise that could have been in bad taste and turns it into a source of light amusement. The idea of Death delivering pizza is a silly one, but the denouement is clever.

The title of “Plot Holes” by Eric Margerum is literal. The protagonist is a fellow who seals up holes in the pages of books by climbing into them. A mystery arises when multiple holes appear from no obvious source. The hero enlists the aid of famous characters from fiction in his quest to find the culprit.

This whimsical fantasy, full of wordplay, is likely to appeal to bibliophiles. The madcap plot bounces along in a fashion that draws the reader into its illogical world, but seems arbitrary in its wanderings.

“Four Accounts of the Discovery of Orchard Street” by S.R. Mandel consists of a quartet of first person narratives by characters who find themselves at the location named in the title. Their experiences take place in California, Malaysia, Florida, and New York. Although varying in their details, they involve strange fruit trees and mysterious women.

This is a peculiar, impressionistic story, making use of subtle allusions to various mythologies. (One of the narrators seems to be Satan, in the form of a modern-day traveling salesman.) The four tales are intriguing, but are likely to make readers wonder what the author intended.

In “Weaving Light from Wounded Hearts” by J.W. Alden, a woman relieves people of emotional pain by literally taking their sufferings into her heart. Her child helps her as she opens her body and removes the agony from her chest. With each person she helps, her heart grows weaker, bringing her closer to death. She hopes to spare her child the same fate, but it appears to be inevitable that the cycle of pain and healing will continue.

This is a powerful allegorical fantasy, very well written in a quietly effective style. The story’s only weakness is that it is far too short, ending just as the premise is established. One wishes that the author had gone on to describe how the woman’s child deals with the strange power and its terrible cost.

“A Truer Account of Sir Geoffrey and the Dragon” by Peter Galalis ends the magazine in comic fashion. The dragon narrates the story, relating several encounters with a knight. The knight accuses the dragon of multiple crimes against Man and God, but the dragon is able to provide evidence that it is innocent. It acquired its vast horde of treasure through clever business deals, not by theft. The knight returns a final time with a scheme of his own, but the dragon has the last word. The story is perhaps a bit too long and repetitious for a lighthearted comedy, but it provides some amusement.

Victoria Silverwolf would like to point out that this issue also begins a serialization of Jack L. Chalker’s 1977 novel Midnight at the Well of Souls.