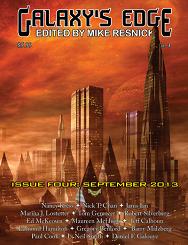 “Sisters” by Nick T. Chan is a morbid fantasy tale where the end of the world can only be staved off by magic which drains and eventually kills mages’ conjoined twins. Self-exiled Mary has long vowed to reserve her magic for only the neediest of times, in order to spare her twin Isabella, but when fellow mage Draven retrieves the pair to fight the Worm Nil, everyone’s plans fall apart. Readers must give this story their full attention in order to catch every slip of foreshadowing and characterization in this deft exploration of sacrifice, guilt, and justification.

“The Prayer Ladder” by Marina J. Lostetter takes place on a literal ladder to heaven, which protagonist Damien must climb, with only one arm, in order to carry his people’s prayers to the top. Lostletter resolves the intra-character conflict between Damien and his bereft mother with straightforward simplicity that matches the length of the story. Lostetter takes a novel approach by leaving the spiritual setting as the background and making the conflict about the characters’ desires.

“Amazingland” by Tom Gerencer takes us on a delightfully improbable adventure out of our regular present and forward through time with Norm and his (newly revealed) talking cat. This post-modern comedic tale carries an underlying Big Question endemic to more traditional speculative fiction, adding an appropriate depth to what might otherwise be a flight of fancy. The ending takes a lighthearted approach, but it will be difficult for readers to forget Norm’s pervasive desperation to escape his dull life back home.

“I am Lonely” by Ed McKeown follows humanity’s first AI space probe as its irrelevance increases along with its vast distance from Earth. Although the description of the AI’s communications with Earth are interesting, it is its revulsion to its own uselessness, and the decision that its revulsion leads to, that question the meaning of life and death. The author answers the AI’s dilemma a bit too tidily, threatening the speculative nature of the story with religious allegory.

“Garuda Superior” by Jeff Calhoun is a science fiction adventure story revolving around an ongoing conflict between human colonists and the possibly sentient Garuda that prey on farmers’ dinosaur herds. Unfortunately, the story is overly action-oriented and lacks any character development, with zero internal conflict, leaving this promising setup crowded with fast-paced plot and little else.