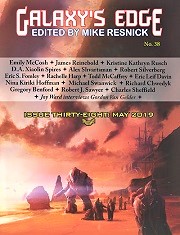 “An Empty Space West of Iowa” by James Reinebold
“Gulp Review for Jacklebeer Burger & More at Intergalactic Highway Rest Stop #698309 in the Dragonfruit Nebula” by D.A. Xiaolin Spires
“The Royalty of Apartment Complex 417” by Alex Shvartsman
“I Love You More” by Eric S. Fomley
“The Woman with a Thousand Faces” by Rachelle Harp
“A Song for Eurydice” by Eric Leif Davin
“Baby and Me” by Nina Kiriki Hoffman

All of the original works in the latest issue of editor Mike Resnick’s bimonthly publication are short stories, ranging in length from five hundred words to five thousand words. With an equal balance of science fiction and fantasy, there is sure to be something to please any reader of imaginative writing.

The only characters in “Breath, Weeping Wind, Death” by Emily McCosh are a young girl and the incarnation of Death, in the form of a very ordinary older man. The girl’s grandmother has just died. The two very different beings have a conversation, and each learns something from the other. Although this brief tale has a very simple plot, it is quietly effective.

The title of “An Empty Space West of Iowa” by James Reinebold reveals the story’s speculative content accurately. In this version of the modern United States, a vast, apparently bottomless hole exists in the middle of the country. The strange phenomenon has always existed, as far as anyone knows, and is now a national park and popular tourist attraction. The plot begins when a boy falls into the hole, doomed to fall forever, or so it seems. A park ranger goes in after him, and discovers the secrets of the mysterious void. The premise is a fascinating one, but the author might have done more with it.

“Gulp Review for Jacklebeer Burger & More at Intergalactic Highway Rest Stop #698309 in the Dragonfruit Nebula” by D.A. Xiaolin Spires is a silly parody of on-line reviews. The wide variety of strange things said by alien customers of the business in question shows imagination, but the humor is sophomoric.

“The Royalty of Apartment Complex 417” by Alex Shvartsman takes place at a future time with widespread unemployment due to automation, guaranteed income for those without work, and technology that allows all kinds of physical objects to be printed from simple raw materials. The resulting society is one in which many people think having a job is shameful. The protagonist is a teenage boy who wants to work so he can buy an expensive gift for a girl he likes. His misadventures with his disapproving family, his clandestine job, and the unimpressed girl lead him to find new possibilities for his future.

The author carefully balances light satire with a serious and thoughtful look at the nature of work and leisure. Young adults pondering their careers will particularly appreciate the story, but readers of all ages can enjoy it.

The shortest story in this issue is “I Love You More” by Eric S. Fomley. A widower lives with a robotic duplicate of his dead wife. There is no real plot, but this tiny character study and mood piece touches the emotions.

Alternating sections of “The Woman with a Thousand Faces” by Rachelle Harp tell the stories of two women. One is dying from a brain tumor. The other, her face horribly deformed in a fire, undergoes an illegal procedure that makes use of nanotechnology. Unfortunately, it does not restore her appearance. Instead, her face changes from one shape to another, everything from different people to animals. She winds up working at a sideshow, along with other technologically altered people. The encounter between the two women reveals what they have in common.

The author combines unique science fiction concepts with poetic imagery and strong emotional appeal. The description of the extraordinary persons at the sideshow is particularly striking, both sad and beautiful.

“A Song for Eurydice” by Eric Leif Davin retells the myth of Orpheus and his descent into the land of the dead, in a doomed attempt to retrieve his beloved from the realm of Hades. Very well written, the story brings the old legend to life, but the author adds little that is new.

“Baby and Me” by prolific, award-winning author Nina Kiriki Hoffman takes place in a fantastic version of the modern world, where all manner of magical beings exist. The narrator is a young woman who is the daughter of a ghost and a witch. She works at a facility that watches over the eggs of supernatural creatures. One of them hatches, releasing a giant tentacled monster. Because the narrator happens to be nearby, the thing thinks she is its mother. Madcap complications ensue, with the narrator physically and telepathically bound to the ravenously hungry baby.

This light, tongue-in-cheek fantasy will appeal to young adults, and those who are young at heart. Readers that are more sophisticated may find the ending inconclusive and anticlimactic.

Victoria Silverwolf wanted to use the word ennead again, but there were only eight new stories to review.