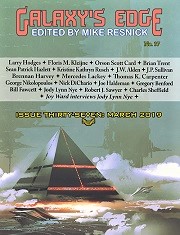 “A Fragment For Father” by Floris M. Kleijne
“Aftershock” by Brian Trent
“Hellhold” by Sean Patrick Hazlett
“The Star Beneath the Staircase” by J.W. Alden
“You Would Make An Excellent Dictator” by J.P. Sullivan
“Walking in a Winter Wasteland” by Brennan Harvey
“The Stylized Unicorn Escapes Its Poster in a Seattle Teenager’s Bedroom” by Thomas K. Carpenter
“The Lady Who Would Not Die” by George Nikolopoulos
“Sin-Eaters” by Nick DiChario

The March issue leads off with this darkly humorous tale about Abe and Brad, founders of Badbear Weapons factory, and their sons Cal and David. To celebrate their enormous success, the four are out for a day of skydiving. Cal, however, has other plans. Wanting to be sole owner, he sabotages his father’s and uncle’s parachutes. As the old men are plummeting to Earth, Cal uses headsets to convince his father to land after his uncle hits the ground, thereby securing the proper line of succession.

Having now completed two-thirds of the story, I wondered where the speculative elements were. Then the parachute-jump scene began to repeat itself, each time with a different visitor from the future who changes which father dies first. The section is perverse and wickedly funny.

I thought the ending was predictable, and the characters were stereotypical and somewhat thin. However, because “Plop Plop” reads like a comic book, I didn’t find those aspects objectionable at all.

“A Fragment For Father” by Floris M. Kleijne

In this beautifully crafted tale, 25-year-old Sandy is invited to celebrate her father’s birthday. To find him, she must navigate through a fantastical world he has turned into reality through his writing; a talent he alone appears to have.

Growing up in ever-changing fantasy worlds, Sandy hates anything fictional. When she arrives at her father’s castle and finds no entrance, she understands the trick being played on her. In order to enter, she must write her way in, thereby proving she has inherited her father’s gift.

The plot is simple but layered with tragic emotions. During a particularly painful birthday party, Sandy’s father makes an innocent statement that forever ruins birthdays for her. Sadly, he thinks he’s helping, but obsession with his writing and inattention to his daughter are obvious.

For me, Kleijne’s beautiful descriptions are what make the story special. He uses every sense, never in excess, but just enough to bring life to the setting. His description of Sandy’s snowbound traverse to her father’s castle almost made me shiver.

There’s a huge amount packed into this 1700-word story. And it has a perfect ending.

If you’re contemplating time-travel, read “Aftershock” before the attempt. If it doesn’t dissuade you, nothing will.

The main character, a shuttle pilot whose wife was recently killed in a space station disaster, wants Earth to deploy an asteroid alert system, but realizing how slowly politicians work, creates his own demonstration. He and a small crew divert a tiny asteroid towards Earth, not a planet-killer but big enough to destroy a city or two.

When their plan goes horribly wrong, they return to the past in an attempt to fix their errors. Of course the law of unintended consequences takes control, and each intervention makes things worse.,

Although some may be put off by it, Trent’s biting cynicism was a style I enjoyed. For example, the line, “empathy is directly proportional to the quantity of lives lost” says a lot about his view of society.

In 1692, Henry Tuttle stands accused of witchcraft. The fact that the middle-aged man had been born twelve years earlier hinders his case, but he has a more than adequate defense.

He launches into a tale about how he and his father were captured by pirates while smuggling a package of dark import. Despite severe warnings, the pirates open the package and unleash evil upon the ship and world.

Tuttle is given an important letter to deliver and, after adventures that become increasingly mystical, returns to his ship, a twelve-year-old who looks like a middle-aged man.

During his witchcraft trial, Tuttle offers the mysterious letter as his sole evidence. When the prosecutor unseals the never opened document and reads it aloud, what transpires is anything but predictable.

Hazlett’s writing wonderfully captures the prim and proper feel of colonial America. For me, this elevated what would have been an ordinary biography to real story-telling.

“Hellhold” begins benignly enough but turns bleaker and bleaker as it unfolds. If you are disturbed by razor-jawed leeches or severed heads that talk and give directions, proceed with caution.

“The Star Beneath the Staircase” by J.W. Alden

The motherless child has no source of love, his father shifting between moods when he either locks the child in a closet or beats him. When the star arrives, the beatings still occur, but the star extinguishes the pain.

After several more beatings, the child tricks his father into meeting the star. The encounter is reminiscent of a familiar scene in Close Encounters of the Third Kind, and while certainly open to interpretation, I loved it.

Amazing is Alden’s ability to pack such emotion in so few words. Perhaps most impressive is the way he captures childhood empathy. Through all the abuse, the child could still recognize his father’s pain. The story is written with such heartfelt innocence that it’s impossible to come away unaffected.

“You Would Make An Excellent Dictator” by J.P. Sullivan

With an opening line like, “The career counselor said, ‘you’ve tested completely unfit for participation in civil society. Which is, of course, why we’ve decided to make you a fleet captain’,” you know what you’re in store for. And after this issue’s darker stories, this satirical piece of speculation was more than welcomed.

Summarizing the story is an injustice because it misses so much of the wit, but in a nutshell, it’s about an over-educated buffoon who becomes lord of a planet. It takes time, but of course, he grows into the position.

Interspersed throughout the light-hearted prose is a serious message; When every need is fulfilled, how do members of society keep themselves occupied? In the end, two vastly different approaches are employed, and it appears the good one will win. Surrounded by humor, the message is handled clearly, never with a heavy hand.

“Walking in a Winter Wasteland” by Brennan Harvey

It’s February in San Diego, and at -30 F, it’s only a bit colder than normal. This is the backdrop for this next-ice-age thriller about Brett Lutz, a severely depressed security analyst who hates his job, that of keeping his living dome secure and intact.

One day, a mysterious girl is found outside the dome, frostbitten and nearly dead. For Lutz, her presence unleashes a flood of memories, about the death of his own child and wife five years earlier.

When Lutz sees the frostbitten girl in the infirmary, he immediately recognizes her as his now older daughter, Molly. The next day, without notice or concern, a military unit arrives and whisks Molly away. Thus begins Brett’s quest to find his daughter and supposedly dead wife, Natalie.

A good portion of the story is devoted to the dissolution of Brett and Natalie’s marriage. For me, these sections are the least engaging. Far more interesting are the ice-age setting descriptions. Harvey does an especially good job thinking through the creation of permanent habitats in extreme environments. Not so compelling were his discussions about parenting.

“The Stylized Unicorn Escapes Its Poster in a Seattle Teenager’s Bedroom” by Thomas K. Carpenter

With a title like this, I expected something light, maybe a bit off-kilter. The story is anything but that. Life for the teenage main character has reached rock-bottom. Her mother has recently died of cancer, there are indications that she’s bipolar, and a unicorn has just jumped from a poster onto the floor of her bedroom. This odd introduction is important because from that point on, the reader must question every vision and thought the M(ain) C(haracter) has.

She begins to relive impactful moments in her life. Here, the author does a brilliant job indirectly portraying her economic state. Things like her closet being filled with only two Goodwill dresses, or parental fights over food money, show the depths of her poverty.

Firmly believing she’s from another portal, she’s had frequent visits with school psychiatrists throughout her young life. Only by using her native intelligence does she learn to act “normal” and become accepted.

The story has no real ending, but I left feeling the teenager’s life was about to improve. I also left with a nagging question, hinted at by her dying mother; is she actually from an alternate portal? Written from the perspective of a frenetic teenager who also may be bipolar, the answer is impossible to determine.

“The Lady Who Would Not Die” by George Nikolopoulos

Lady Death walks through an unknown battle field, tending to the almost-dead, making their last moments peaceful or answering any of their final questions. This introduction tells you what Lady Death does. The remainder of the story is about who she is and what she might become.

Sometime in the past, the Lady was a mortal who lost her family in a terrible fire. With nothing to live for, she begs Lord Death to take her. Rather than granting her wish, he makes her replace him, allowing him, at long last, to retire and die.

Now, Lady Death has found her own replacement.

Woven throughout the story is the relationship between Lady Death and goddess Moira. It is this relationship that keeps the Lady grounded and provides the most touching moments of the story. Another unexpected and insightful gem was Lady Death’s musing over the painfulness of being immortal.

In this fanciful tale, the devil lives in the hills outside il Villaggio di Ombre. Father Bernardo, the local priest, spends most of his time undoing demonic deeds, at least until a mafia goon arrives carrying his dead boss and a gun.

Because the boss was a religious man and never had a chance to make last confession, the bodyguard demands that a sin-eater be found, a person who in exchange for each sin purged, loses one day of their life. It quickly becomes apparent that no one person, or even the entire village, can afford to lose the number of days required to purge each of the boss’s sins.

In a last-ditch effort to save the town from the bodyguard’s mafioso rage, Father Bernardo tricks the Devil into helping them. This collaboration has unexpected and very funny results.

There’s such a nice flow to this story. The prose, dialog, descriptions, they all blend together to produce a very pleasant read.