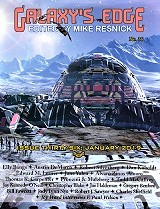 “The Wordless Age” by Elly Bangs

“True Love, False Memories” by Austin DeMarco
“A Song for Persephone” by Dan Kobolt
“I’ve Got the World on a String” by Edward M. Lerner
“All Show, No Go” by Alvaro Zinos-Amaro
“The Flavors of Sorrow” by Thomas K. Carpenter
“Pieces” by Bill Pronzini and Barry N. Malzberg
“Red Roses” by Todd McCaffrey
“Why?” by Joy Kennedy-O’Neill
“What You Won’t Remember” by Christopher Blake

“The Wordless Age” by Elly Bangs

Louis is a word broker in this SF short that reveals a future where people must pay for every word they utter. Louis has just sold the rights to the word ‘poignant’ to an oligarch, though his commission isn’t enough to get him into the black. And soon after Louis loses his job.

When the oligarch offers Louis great riches for his genome and the genome of his sister, Louis sees a way out of debt. The only impediment is that his sister ran away to the word-pirate zone many years ago. Can he find her, and if he does, can he convince her to sell her genome rights to someone she sees as the devil incarnate?

This story explored new areas with a well-structured plot and engaging prose. Altogether it was a great piece of entertainment.

In this flash SF, a woman is the often-maligned receptionist at a clinic that modifies people’s memories. The customers are rarely happy, but then how can they trust their memories to verify what the clinic changed?

This was a short exploration of an intriguing aspect of memory manipulation.

“A Song for Persephone” by Dan Kobolt

Parthenope, a siren, has made a bargain with Hades in this short fantasy. She has promised him five hundred souls per year if Hades does no harm to her mistress Penelope.

Against modern steel ships, her mythical song is ineffective, and she falls far behind her quota. Hades is demanding payment; can Parthenope find a new song to sing from her remote Bermuda island?

This character-centric story was easy to read and engaging, with an interesting snippet of mythology brought forward to modern times.

“I’ve Got the World on a String” by Edward M. Lerner

Lerner’s SF short is about Archie, a theoretical physicist in search of the theory of everything—the universal truth that resolves the differences between quantum mechanics and general relativity.

Convinced the answer lies in the mathematics of string theory, Archie risks ridicule and obscurity in his life-long search. But if he finds the answer, what would it mean for humanity?

This was an unusually slow and belaboured story, with little to entice the reader through to its rather blunted ending.

“All Show, No Go” by Alvaro Zinos-Amaro

Otto is a Rossum robot in this SF short. He uses special programming that allows him to hide his unique ability to perfectly duplicate any inanimate item.

When his owner discovers this, she uses Otto to duplicate extremely rare printed magazines from antiquity. With her riches ensured, the owner begins to worry about the authorities realizing their fraud. Just as she prepares to hide herself from discovery, the police show up.

This story labored through the beginning and by the last third it was hard to feel any empathy for the protagonists.

“The Flavors of Sorrow” by Thomas K. Carpenter

In this short fantasy, elderly Albert visits a Chinese chef whose cubes of food transport Albert back to his most poignant memories. Each cube reveals and illuminates his past decisions.

For years, the weight of his sorrows drags him down. Now these relived memories could open a new door for him, but only if he has the nerve to take it.

This was a pleasant revisit of the ‘past regrets’ plot.

Peter has a heavy conscience in this SF short. He was the commander on a mission to a remote planet when they encountered a backward humanoid culture oppressed by its shaman.

When a crew member suggested they could help the indigenous people by removing the shaman, he agreed. Now, thirty years later, he discovers the truth about what happened and is wrestling with his conscience about his role.

This story was rather dull, the prose was almost exclusively a dissertation and had few new ideas for the SF genre.

McCaffrey’s short fantasy is about Padraig, an Irish farmer who is surprised one day by the arrival of his great uncle’s freshly dead body, a hundred after he was supposed to have died. The farmer, who discovers the body, thinks the fairies are involved, but Paddy just buries his kin and gets on with his life.

Then one day a young girl appears, claiming to be related to his great uncle, and furthermore, she has strange pixie-like ears. What should Padraig do with this effervescent young girl?

This story had enough mystery to make it an entertaining short story.

The doctors have saved a man with stage four cancer in this flash SF. The experimental medical regime that saves his life, leaves him with a strange affliction. Now he finds himself questioning everything. Have they saved him from cancer, just to watch him die from a bizarre and uncontrollable treatment side effect?

This story was a nice snippet of entertainment.

“What You Won’t Remember” by Christopher Blake

Blake’s SF short tells us of a future dystopia in which empath’s modify people’s memories to keep them compliant.

An empath is working on a mysterious old man. Found in the wildlands, outside the underground city, the old man has many illicit memories. But in taking the man’s memories, the empath sees these memories and they begin to threaten his own beliefs, potentially upsetting the smooth operation of the society.

This was nicely crafted story that had several unexpected twists in its tail.