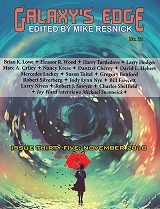 “The Convincer” by Eleanor R. Wood
“The Rat Race of Tomorrow” by Larry Hodges
“A Multitude of Sparks Descend” by Marc A. Criley
“Livecasting My Descent into the Martian Underworld” by Dantzel Cherry
“The Resurrection of Abigail” by David L. Hebert
“Cat Lady” by Susan Taitel
“A Waltz in Eternity” by Gregory Benford

The final Galaxy’s Edge of 2018 brings us three flash fictions, two very short stories, two longer short stories, and one novelette. Unusually, all are SF except one of the shorter stories and, in a mathematically improbable way, it is one of the two best stories in this above-average issue.

This is a variation on and combo of the twin paradox and the time-traveling get-rich-subjectively-quick schemes in which an older brother’s dreams of going to space and getting rich are crushed when his dad dies and he feels like he has to keep up the family store and help his mother and brother. The younger brother in the sibling rivalry doesn’t feel the same and heads out to space as soon as he can. But neither person’s lives and dreams are quite what they expected.

This trivializes space but is a decent tale of families and true wealth.

“The Convincer” by Eleanor R. Wood

In this “indistinguishable from magic” tale, multi-dimensional telepathic beings have apparently taken over Earth and have been studying humans ever since. Because humanity exists only on one plane and can’t “speak,” most aliens think it’s obvious we’re animals but Convincer Vla (an alien lawyer) argues that we should be freed. After the case doesn’t go her way and a remarkable human woman who can speak (with mechanical assistance) arrives, bold steps are taken.

This obviously replays various struggles for rights and liberty that have gone on within humanity but, while readable, doesn’t quite measure up to that weighty theme or do anything remarkable with it.

“The Rat Race of Tomorrow” by Larry Hodges

In the first of three consecutive flash pieces, a groggy god addresses the aliens who’ve moved onto Ganymede after humanity got destroyed in a way the god doesn’t quite remember at first but, as its “head” clears, it’s able to make a pun. This doesn’t entirely make sense, the narration is a little awkward, and the pun isn’t that great but there are phrases within the tale which are amusing.

“A Multitude of Sparks Descend” by Marc A. Criley

This is another flash piece of a godlike galaxy being but goes for poetry this time as this being has lost its companion and is searching for it after both have helped sow the seeds of life through existence, which reaps a reward. It’s fine, but could have used more editing, as “moreso” isn’t a word and both “helixes” and “helices” occur.

“Livecasting My Descent into the Martian Underworld” by Dantzel Cherry

The final flash tale has a character trying to get funding to keep a Martian expedition going with ratings via livecasting back to Earth when disaster and fortune oscillate rapidly with no knowing how it ends. That doesn’t really satisfy me and likely won’t satisfy others and the key scientific element (which can’t be specified without spoilers) is questionable.

“The Resurrection of Abigail” by David L. Hebert

In this variant of Misery (I think, as I haven’t read the book or seen all the movie), a mad scientist/fan resurrects his favorite science fiction writer in order to make her write more. She uses his psychology and her writing to try to pave the way to freedom.

She’s resourceful and there are amusing lines (such as her reflecting on a large painting which was used as the cover for one of her potboilers and deciding “you can’t judge a cover by its book”). However, the science underpinning the tale isn’t convincing (and some simple factual statements are illogical) and it doesn’t maximize the plot’s potential for tension.

A detective lady looks for a pattern in the rash of missing cats in an effort to find them, collect the rewards, and establish to her mom that she can too make it on her own. There’s much more to this lady than meets the eye, which is good given the fantastic cause of the cat captures.

This feels like an interesting mainstream tale in its opening before effectively morphing into an even more interesting fantasy tale and has a good, off-hand, off-stage climax and a decent closing line but really needed a superb line to send it over the top. It’s still a notable story with an excellent wry tone and promises good things to come, given that it’s a first sale.

“A Waltz in Eternity” by Gregory Benford

On the Moon, within the vast and bureaucratic SETI Library, Rachel sometimes experiences the virtual records of long ago interstellar explorations, sensing a mystery in them and in the galaxy at large, and sometimes deals with her superiors, who think she may be wasting her time and theirs, from her precarious junior position. Will the puzzle pieces of SETI, red dwarfs, the Fermi Question, and the dance of stars come together before she’s expelled and, if so, what kind and size of a picture will they produce?

This novelette is written in a much richer way than most of the stories in this issue, aided by an epigram from Vaughan and more quotes from great poets such as Shakespeare, Shelley, and Jerry Lee Lewis, but brings its own scientific poetry as well. However, given that it is basically a library research mystery, it lacks an exciting plot and could perhaps have used a “B” story of a more active sort to contrast with its sole plot line. Also, one aspect of the behavior of some of the aliens puzzles me, the absence of any concern about dwarf flares and very little concern about all the other ways species can go extinct (whatever the health of their stars) also seems puzzling. Those problems aside, this was a pure-quill SF tale which tackled a serious issue with a neat idea.