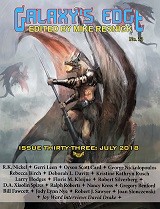 The thirty-third issue of Galaxy’s Edge contains four reprints and nine originals. Of the latter, the Davitt, Kleijne, and Spires are strictly flash fiction, while the Nikolopoulos and Birch are less than two thousand words, and the Nickel and Leen are less than three. The heftiest stories are the Hodges at four and the Roberts at six. Five of the tales are fantasy and four are forms of SF. Regardless of genre, almost all are humorous or at least light and nearly as many provide some degree of enjoyment though those looking for tales of great complexity, depth, and angst will need to look elsewhere.

An AI wakes in a confused state and has a conversation with an Intelligence to re-orient. This moebius strip of creator/created touches on many issues (life, the universe, and everything including the Fermi Question) but walks well-trod ground and with little in the way of actual drama and plot.

“On Four Feet Instead of Two” by Gerri Leen

This is the story of how Coyote helped Gray Cloud bring horses to his people. While not having much conflict or drama, it was entertaining.

A retelling of Pandora which combines it with another myth. This is much like the previous tale.

“This Isn’t Better” by Rebecca Birch

A male protagonist (who somehow doesn’t seem male) narrates his familial troubles and how his magic notebook plays into them. This didn’t introduce its cast clearly and the arc was unconvincing.

Playing on Pride and Prejudice and Austen mash-ups, this describes the wannabe naturalist Nigel encountering a cow-killing creature as seen by his sister, Matilda. A very simple tale and obviously all about grrrl-power but entertaining.

Satan’s kicking around in Antarctica, morosely contemplating tomorrow’s Armageddon, when Marilyn Monroe shows up with an offer to guarantee his victory in exchange for his soul. (Well, it’s actually a higher-dimensional superbeing but, appropriately, it looks like Marilyn Monroe.) Being a master of such deals, Satan agrees. The next day, the battle is joined!

This is initially a very funny tale, worth the price of admission just for the anagram and other comic elements, though the Armageddon combat goes on a bit too long and the humor gets a little lost before its nice resolution.

This is Amelia Sanchez’s resignation letter from Maec Lhyabr Co. The commute has its downsides and her boss can’t keep its tentacle in its pants. A very funny little piece with some actual, albeit familiar, mind-expanding elements.

A pseudo-noir tale in which a private eye investigates kids who have many eyes, both public and private. Aside from having several phrases which didn’t read idiomatically, the main problem with this very peculiar story is that, while it has a legitimate science fictional element, the fictionalization doesn’t really maximize its potential.

When the horrible alien dreadnaught pulls into Frank’s Starship Repair under truce and the commander wants its previously amazingly fast but now broken engines repaired so that the aliens can continue their war against humanity at a later date, Frank Buckner has his work cut out for him. Fortunately, he’s a good mechanic and has friends in high places.

While quite contrived and intentionally a bit silly and retro (this is a story which has a Commodore Harl Vincent), it’s light and fun and the colorful alien gods add a layer of distinctiveness.