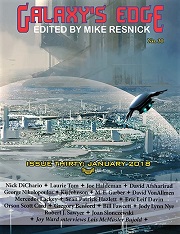 “Of Love and Olives” by Nick DiChario

“Kite Dancer” by Laurie Tome
“See a Penny…” by David Afsharirad
“Frozen Moments, Stolen Out of Time” by George Nikolopoulos
“After the Story Ends” by M. E. Garber
“An Unfamiliar Face” by David VonAllmen
“The Godhead Grimoire” by Sean Patrick Hazlett
“A Song for Charon” by Eric Leif Davin

Nick DiChario brings us a modern Italian folktale in “Of Love and Olives,” in which Elizabeta questions her marriage after connecting emotionally with a young WWI officer found in an iceberg and thawed on their olive farm. Like the folktales it is modeled after, Elizabeta’s story ends with an upholding of traditional values. DiChario sprinkles the narrative with Italian phrases.

“Kite Dancer” by Laurie Tome imagines an alternate history where wind magic shapes the tactics of World War I. Ke-feng Yu, a Chinese Kite Dancer, resents her assignment with the Imperial German Navy, as well as her visual disability caused by shrapnel blast. As their raid turns dangerous, Ke-feng Yu’s relationship with the crew becomes clear. Tome gives much thought to the perspective of visually disabled Ke-feng Yu, as well as how her negative assumptions, brought on by her loss, falsely color her emotional perception.

In “See a Penny…” by David Afsharirad, Devlin can’t believe his good luck when a lucky penny sways his odds, then lashes out at his wife when the penny is lost. In this classic morality tale, the most important outcomes depend on much more than simple luck.

Flash piece “Frozen Moments, Stolen Out of Time” by George Nikolopoulos examines how a disruption in the flow of time gives the protagonist an opportunity to save his son. Classic and heartfelt.

In “After the Story Ends” by M. E. Garber, our narrator struggles against the call of the Fairy realm after rescuing her baby from that very place. Her vivid experience in Fairy leaves the human world pale and tasteless by comparison, but leaving would betray her family. Another survivor of Fairy gives our protagonist perspective on her options in a compelling way that many stories inspired by the Celtic mythology of Tir na Nog do not. A story about what makes us human and how trials shape a human soul.

“An Unfamiliar Face” by David VonAllmen shows us horror from the monster’s perspective; as the monster attempts to control its urge to assault its victim by calling on the vestiges of its former personality, we learn the horrible fate of its victims and the world. A poignant horror story deftly mixing action and back story to paint a sympathetic antagonist we’d fear to meet.

When spite prompts soon-to-be-divorcee Miranda to open a package meant for her husband, she soon finds herself sucked into its selfish, evil plans in “The Godhead Grimoire” by Sean Patrick Hazlett. Classic horror utilizing gruesome blood sacrifices and bare greed.

In “A Song for Charon” by Eric Leif Davin, Charon at first refuses to help a living soul across the river Styx, but then is convinced by Orpheus’ song. This story relies heavily on Greek mythology.