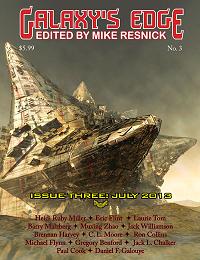 Laurie Tom‘s “The Held Daughter” tells the Fourth Princess’s story as she waits, held back from marriage, until her father, the Emperor, finally stops trying for a son. As it becomes apparent that the Imperial Father is to remain sonless, he undertakes teaching his daughter, a geomancer, what she will need to know to become his successor. During a visit to northern territories, she meets Jing-lung and the story becomes a fantasy of love thwarted by duty. A pleasant, if predictable, read.

According to the editor, Mike Resnick, “13-year-old Muxing Zhao, with this story, becomes the youngest writer ever to sell to a professional science fiction magazine.” The story, “A Brief History of a World in the Time Before This Time,” presents the kind of speculative history I wish I had studied as a kid. If I had, I might have a) remembered more of it, and b) enjoyed it more. It covers everything from “The Beginning” to “The Infection Epoch,” with stops along the way. Nicely developed piece with great language names.

“Just Another Night at the Quarterly Meeting of Terrifying Giant Monsters” by Brennan Harvey relates a short but eventful meeting. The title pretty much sums up the story, though the monsters, King Kong and Godzilla among them, aren’t particularly terrifying. Cute, short, and an easy read.

Ron Collins tells the story of what happens when an extraterrestrial, Alit ul Lach, confesses to a human, Carl Weeks, that the alien force occupying Earth is about to leave and kill the planet in the process. Alit offers Carl the opportunity to save two hundred humans. And Carl has two days to find the right humans to save. This story exemplifies the idiom about what happens to “the best laid plans of mice and men.”