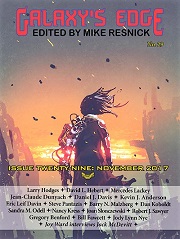 “The Nature of Swords” by Larry Hodges

“The Nature of Swords” by Larry Hodges is set in a depopulated world where magical weapons are the only survivors of an arms race that led to the extinction of humanity. A nameless sword, discontent with its lack of identity, travels across the land and sea in search of a human to provide it with a name. It eventually finds a human but things end unexpectedly. The story is well written and engaging, but it is short, and boils down to a scorpion and frog tale with an inlaid metaphor for the arms race and humanity’s tendencies towards self-destruction. While a fun, quick read, there is nothing new here.

David L. Hebert’s “Suicide Party” is a brief think piece in which the idea of legalized suicide is examined in the context of an office conversation. The banality of the conversation is an interesting contrast to the issue of how we as a society treat death. The story isn’t long enough to explore the concept in depth, but what it does, it does well.

In “Pilot Program” Daniel J. Davis presents an interesting twist on the old “trapped by technology” motif. Jonathan Hale, a disabled war veteran, gets the unexpected delivery of an automated in-home health care robot, with a built in bed. When the bed starts restricting Jonathan “for his own good,” he decides to fight back. Davis cleverly sets the scene and conflict in such a way that the motives of the HealthAid and Jonathan are both reasonable and logical. The way in which Jonathan escapes the robot is clever, with a style reminiscent of some of the golden age and early post–golden age authors: a clever setup with a logical, but tricky, solution. My only complaint is that the world building is slapdash with settings, names and characters that feel very worn. While this might be a deliberate stylistic choice, I think that it hindered, rather than forwarded the story.

“Ghost Dance” by Eric Leif Davin leaves me of two minds. In it, Thomas Edison, as per actual history, engages Buffalo Bill to bring in Indians to perform the Ghost Dance to be captured on film. The majority of the story provides history and delves into the mind of Kicking Bear, the leader of the dance. I appreciate the historical accuracy of the writing and the quality of the writing is quite good. What makes me hesitate is that the ending of the story is so clearly telegraphed that the conclusion was absolutely no surprise at all.

“It’s Only Skin Deep, Darling” by Steve Pantazis is another short piece that uses an SF setting to discuss contemporary social concerns. In this story the famous alien singer Zarrissa, who has been stealing her hits from Earth musicians, decides to wear a human costume and become “transhuman.” It is meant to be a light, humorous piece, but ends up feeling a bit trite.

“The Coming of Darkness” by Dan Koboldt is set in a future where energy production is failing. When the grid finally goes down for good, the protagonist, who is night blind, and his daughter have to make their way to the desert where he has prepared a holdout. As the story progresses we learn about the missing mother and the connection between father and daughter, including the bounds of love and sacrifice. The story is a fairly interesting one, but the setting is one so overused that it weakens what is otherwise an interesting meditation on family relationships and parenting. Koboldt puts together a nice readable story, but there is no punch, just a pleasant ride.

In “Green” by Sandra M. Odell a black homesteader in the Texas territories by the name of Solomon Hatchett ends up with a Fay guest when the wounded elf comes to his farm. Soon others, both human and Fay come looking for him. The story is well written and the description of the Fay as well as the concerns of Solomon are well done, but the story itself is a common narrative and lacks anything to make it really stand out.