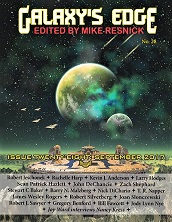 “As Sunlight Grabs Me” by Rachelle Harp
“Theater of Death” by Larry Hodges
“The Sultan’s Cellar” by Sean Patrick Hazlett
“Tessa and the Troll” by Zach Shephard
“Cut-Rate Couples Weekend and the Witch House Inne and Tavern” by Stewart C. Baker
“A Delightful Comedic Surprise” by Barry N. Malzberg
“The Sweater” by Nick DiChario
“The Great Buddhist Monk Beat Down” by T.R. Napper
“Ergomonochron” by James Wesley Rogers

Robert Jeschonek’s story “The Breakout Story of Galaxy’s Edge Issue Ten Million” will wind any reader with its length, and that’s only the title. Jeschonek is being rather bold: this is a story about the very magazine in the reader’s hands. Every character in every story ever published in the magazine has come to life in a universe called Galaxedgia. It’s a bit too cutesy for my taste, and accompanied with a tired, bloviating narrative to boot. But apparently, the story knows it’s pushing it, as there’s a line addressed to us: “Just as you DEAR READER, are thinking about jumping to another story…” Indeed, I was! The narrator even mentions the possibility of a lambasting from reviewers, so I’m here to meet those expectations. It’s a love letter to the editor, and to the magazine, which is sweet in a schlocky B-movie romance kind of way. That’s not without merit.

“As Sunlight Grabs Me,” By Rachelle Harp is short and sweet, a narrative that grabs and holds interest. It follows the lone survivor of the spaceship Dragonfly as she adjusts to surviving after being separated from her crew. The ending reveals what the story is actually about, and while it was moving it left me wanting more. I wish Harp had gone further.

“Theater of Death” by Larry Hodges is a bizarre tale about Death meeting Life in a movie theatre, and they have a face-off that ends in destruction and cheap puns. Death dies a few times, retains his macabre sense of humor, and changes not the least.

“The Sultan’s Cellar” by Sean Patrick Hazlett opens with some palatable tension as the protagonist spots a harlequin in the mold of Stephen King’s own Pennywise. Perhaps that’s not a fair comparison, but It is in the current fan consciousness since it just got a film reboot. The harlequin haunts the protagonist, who runs into a pack of them later in his life and narrowly escapes. That’s not to say it ends at all well. While the mood is perfect and the pacing conducive to the tension, there’s not much new here. It is however, an enjoyable read.

“Tessa and the Troll” by Zach Shephard is a bright vignette about a troll and a troll hunter uniting in friendship. Sweet, but not much to chew on, as it’s over as soon as it starts.

“Cut-rate Couples Weekend at the Witch House Inne and Tavern” by Stewart C. Baker is a very amusing yarn told in the style of online reviews for a hotel that asks for its patron’s immortal soul as payment. I laughed out loud several times. Customers complain about trying to play Pokémon Go, about ghosts in their showers (“Yes you read that right. There was a shower person.”) and about the general horror of staying anywhere located in a Lovecraftian nightmare. This one is worth it for the grins.

“A Delightful Comedic Surprise” by Barry N. Malzberg is a humorous epistolary between an editor and a writer. The editor wants an uplifting story, and the replies are rather hilarious in an inside-baseball writer’s sort of way. It’s a tongue-in-cheek critique of the dismal amounts speculative fiction writers are paid. Clever, with a good twist at the end.

“The Sweater” by Nick DiChario is delightful. It is a story about lost love and its pain, a common literary theme, yet we get it here with the help of a sentient sweater. Yes, you read that right. At times funny, and at others heartbreakingly poignant, DiChario weaves a tale about love, loss, and the complexities of relationships. The protagonist is an undeserving bore, leaping before he looks, and bearing the brunt of his bad decisions. The ending was okay, but a bit unsatisfying. The meat of the story makes up for it, however.

“The Great Buddhist Monk Beat Down” by T.R. Napper is about a protagonist with no memories being attended to by a medical team. The whole thing reads like a fever dream, as the protagonist’s thoughts are projected over the real world, confusing what he actually sees. These types of reality-bending stories are hard to manage and land, but this one ends in an acceptable place.

“Ergomonochron” by James Wesley Rogers is an action-packed story with a cast of stock characters: the President of the United States, a mad scientist, a superhero and a supermodel robot. It’s hard to form an attachment to any of the characters, as the experience of the narrative is akin to witnessing a drive-by-shooting. By the end the president teams up with Benjamin Franklin to accomplish a mission. Maybe that’s cool, but nothing much resonated with me emotionally.