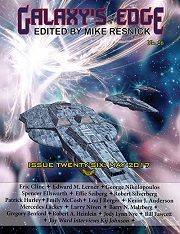 “Air Quotes” by Eric Cline
“Nothing to Lose?” by Edward M. Lerner
“Getting To Know You” by George Niolopoulos
“Finding Mars” by Lou J. Berger
“Carbon Dating” by Effie Seiberg and Spencer Ellsworth
“Exit Interview” by Patrick Hurley
“Water and Wood” by Emily McCosh
“The Dead Guest of Honor Speech” by Larry Niven

“Air Quotes” by Eric Cline is a strange dialogue between two personalities. The engaging conversation takes place in a limbo, higher plane or a different dimension. I really can’t say other than they don’t have bodies. It is discussed and speculated, but never revealed where they are. The Newbie and the experienced disembodied voice sift through many different ideas of using punctuation to communicate. Kind of reminds one of Plato’s Dialogues; conversations featuring Socrates to better study philosophy and law. Not that these characters are reaching for such lofty goals. If anything this made me chuckle, especially when Newbie stumbles upon swearing. Regardless how carried away the characters get without bodies to amuse themselves, they make the most of their witty rapartee.

We arrive by copter on a private island with Lawrence Crawford, surrounded by the best medical personnel money can buy in “Nothing to Lose?” by Edward M. Lerner. Lawrence is cursed with a failing body and has hatched a plan to extend his life, at least long enough to find a cure for his autoimmune disease. Sound cliché? Probably. The deserted island and assorted properties are Lawrence’s coup de grace for his ungrateful family (waiting to cash in on the trust), and false friends (eager to torture him) and his own cursed fate. Bitter? Yes! The cryonic suspension works without a hitch and Lawrence later awakens as an archaeological marvel. A bit like a Twilight Zone episode, the reveal will leave the reader either horrified or laughing.

“Getting To Know You” by George Niolopoulos gives us a very brief moment in the life of Joseph. Details are slim, but Joseph meets with his younger self through means of a temporal tattoo. After enjoying a surprisingly satisfying night of sex, Joseph promises his younger self he will watch over him. From what exactly is Joseph in need of protection? What purpose was there for Joseph having sex with himself? Since we do not know the rules behind this world’s method of time travel or whether there is some type of multiverse setup, we can only guess. Even more curious is how the older Joseph proposes to keep his promise of protecting the younger Joseph now that the older is returning. The shocking reveal was effective, but loose ends and questions of the aftermath of this encounter do this story no favors.

In “Finding Mars” by Lou J. Berger, Lydia is a willful young woman who has decided to get even with her father by traveling to her mother’s home on Mars. The story starts with her stealing her father’s spaceship to get away from her father’s demanding rules. It is never stated, but I’m guessing Lydia is between 16 and 18 years old. It could even be surmised she is younger, because we don’t know the acceptable age to begin space travel in this universe. It may not even matter, for she is bent on leaving anyway. So with destination locked in she waits, but soon finds the ship has a number of issues. Angrily, she documents every mishap that happens on the ship, which are all her father’s fault. Each system that goes down she works on trying to restore, even going as far as reading manuals. However, it becomes apparent with each new entry that her destination, regardless of her effort, will result in her end. Her venting softens slowly and soon becomes remorseful. Realizing she can’t fix her way out, depression sets it. It is hard not to feel bad for her, even though she is a misbehaving brat. Her destination completely screwed up and supplies dwindling, I would like to think her father was following and listening, waiting for the perfect moment to save his ungrateful daughter.

Effie Seiberg and Spencer Ellsworth’s story “Carbon Dating” takes a tongue in cheek view of global dating literally. The Internet, an ever evolving resource, has decided it loves Mt. Baker after only three hours of self–awareness. The Internet wasn’t suddenly in love though. After a quick scan, The Internet devised goals towards its happiness. At least in terms built by the human race. It draws some lofty conclusions and finally decides true happiness can be found in finding love. Yet, how or what would fall in love with a brainiac such as The Internet? Dating sites were no help. Humanity was too petty and small and viewed as not compatible, so The Internet (using what it learned on dating sites) narrowed down its search to an earthly target, mountains. Seiberg and Ellsworth continue to mash up different ways to explain the reason The Internet chose Mt. Baker, but at this point The Internet sounds desperate and seems to be reaching for an unobtainable objective. When all overtures of love are ignored The Internet has a fit. This spawns a series of well planned acts of revenge and begins to bring about an ecological nightmare. Even more disturbing is The Internet seeking validation for its decisions to act. The Internet’s rationale to find acceptance is very human, but juvenile. However, this behavior does deliver a sense of happiness, eerie as that sounds. Dare we wonder what the next three hours will bring?

Intergalactic Cruises’s crew has its hands full when a recently hired fast- talking entertainer has infiltrated the control room in “Exit Interview” by Patrick Hurley. Unaware of his past discretions, Intergalactic Cruises’s security catches him red handed as he hacks the navigation systems. Our techno thief, now rigorously interrogated, explains himself to a dubious ear. Claiming he never knew about a certain diamond owned by a Duchess currently on ship, we learn he has spent a lot of time in cryo for cyber-cracking. Granted, he was young and perhaps has learned his lesson. Each new accusations is backed up with a solid reason for his actions; be it discovering the password (too simple), misinterpreting the company’s mission statement (he was part of the crew) or confusion about staff development (he was a fast learner). Being a nice guy and a professional, he provides them with a scenario of what could happen if there was a thief on board, which he is not. Each detail of the heist he reveals, alarms the crew more and makes him give up his PDA. Yet, keeping him under wraps is a little tricky. He is a techno geek and has finally learned how to flee when the jig is up. Hurley highlights the quirky personality of a space thief who has done his homework, but probably needs work on his execution. Perhaps he should stick to his lounge singing.

Brooke is a grieving wife in Emily McCosh’s “Of Water and Wood.” Her husband Easton who was a gifted wood carver has just been buried near the tree line by their house. It is not known how Easton died. However, we do know Easton gave off a magic that even his wife couldn’t explain. Brooke’s heartache, despite attempting to keep busy, creates a bubble of isolation, only broken once by a preacher checking on her welfare. He doesn’t stay long. It seems a storm is building and has been growing in intensity since her beloved husband has met the soil. Brooke is constantly reminded of her husband inside (carved bed posts of animals), outside (yard work they shared) and feels spooked and restless. Finding solace where she can, she throws herself into domestic work until exhausted. When visited by a presence composed of wood claiming to be Easton she flees. Scared, she hides, sleeps and dreams of Easton. It takes everything to venture outside again, the woodland spirit yearning for her as she pines for her lost love, the storm’s assault calming as she rejects the idea that this creature is her beloved. It isn’t surprising that she opens her arms to welcome the creature into her bruised mind. McCosh offers up a haunting vision where pain and yearning inadvertently form a tangible and inescapable nightmare.

Reading “The Dead Guest of Honor Speech” by Larry Niven was a challenge. Nathaniel Banthry, an author familiar with conventions (having attended some), has passed away. Vague on the details, Banthry’s head was frozen and reanimated to be Dead Guest of Honor at Baghdad Con. His helpers, Wednesday and Massook, inform him about his mental state and all the resources at his disposal. At times, the conversation tangents are distracting, but the rotoscope of fresh perspectives helps form Nat’s personality. Nat easily adapts to his new surroundings, but his upbeat nature falters on the speech. What wisdom can he possibly offer to an advanced world? Taking everything in stride however, the next time he is revived, a familiar face offers an intriguing opportunity for future adventure.