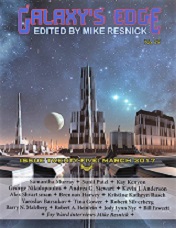 “The Tragedy Of The Dead Is That They Cannot Cry” by Sunil Patel
“The Loyal Order Of Beasts” by Kay Kenyon
“You Can Always Change The Past” by George Nikolopoulos
“It Takes a Special-Special Person” by Andrea G. Stewart
“Golf To The Death” by Alex Shvartsman
“My Monster Can Beat Up Your Monster” by Brennan Harvey
“Your Grief is Important to Us” by Yaroslav Barsukov
“Do Not Call Me Bento” by Tina Gower

Samantha Murray’s flash piece “Bragging Rites” speculates what it would be like if the dead showed up to their own funerals and gave eulogies. The protagonist is a woman named Carla (or Clara; whether the name changes mid-story due to autocorrect error or some deeper commentary on identity is up to the reader to determine). Carla brings the baggage one would expect a daughter to have about her father, and Murray does a good job showing the emotional impact inherent of people intimately bound by blood but not sentiment. It is a sweet concept that doesn’t go much deeper, leaving this reader with questions.

“The Tragedy Of The Dead Is That They Cannot Cry” by Sunil Patel is a vignette that flips the memorial service on its head: the shades mourn the second chance of one of their own, Rosita, who has been dead with them and now has a new, corporeal life. Patel does a good job of evoking sympathy for the shades who feel trapped in a fatalistic cycle. Their reality is a brute force that crushes them despite their inner protests.

Kay Kenyon’s lovely “The Loyal Order Of Beasts” is a story about the resilience of stories and the quality of the human imagination. She weaves an utterly charming concept: the main character is Grendel (yes, that Grendel), who lives in the Realm where legends such as himself go once created by the human mind in the Mundane World. Grendel and his friends are dedicated to visiting humans in their dreams, and they are all put out by blockbuster entertainment and the influx of “slashers” from cheap horror movies into their world. Humor, sadness, and beautiful observations about truth are intertwined with a deft ease throughout Kenyon’s prose. The reader will not be disappointed.

“You Can Always Change The Past” by George Nikolopoulos is described as the shortest science fiction story on record, as it can be finished in two blinks. Nikolopoulos is no doubt attempting to use this brevity to the effect of maximum boldness, but the result is a time travel story with a common ending.

Andrea G. Stewart gives us a coming of age story in “It Takes A Special-Special Person,” detailing the life of a foster child named Jeffrey; his behavior problems lead him to misuse his superpowers, so he lives his days in a group home with a power dampener. Jeffrey is a pitiable character, coping with his problems and his rage while trying to hunt down his birth mother, who abandoned him as a baby. His outbursts, which are relatable and funny, have such a verisimilitude to them that Stewart must be given credit for immersing the reader into the inner life of this conflicted teenager.

“Golf To The Death” by Alex Shvartsman is an amusingly diverting look at diplomacy between planets over a golf game. As the title of the story suggests, the loser of the game has to die before negotiations continue as usual. Politics, right? Too bad the representative from Earth didn’t know that, and too bad there are monsters with tentacles willing to disrupt the game and attack the players. This one is an amusing and witty treat.

“My Monster Can Beat Up Your Monster” by Brennan Harvey explores the guardian-angelesque relationship between a turpitudinous child and the monster in her closet. The concept is well-trod in the current popular culture and calls to mind a Pixar film, and the initial conflict of the story is solved without much surprise. The monster does the child’s bidding to make her feel confident and loved, until she gives him a demand that puts him at odds with the rules of his realm. While predictable in parts, the characters have a comfortable sweetness to them that isn’t without merit.

“Your Grief is Important to Us” by Yaroslav Barsukov is an impressive stream-of-consciousness story told from the viewpoint of a man coping with the loss of his wife, a man who might very well be insane, a man who wants the android to stop asking him questions. While the subject matter is dark in tone and the prose style deliberately murky, the ironic ending jolted me into laughter. This is probably the most surprising story in the issue and proves that Barsukov is a newer author to watch.

“Do Not Call Me Bento” by Tina Gower is an engrossing romp through the superstitions and fantastic myths of Portugal. Witchcraft, monsters, suspicious neighbors and religious figures are the backdrop to a scene that opens with the suspicious slaughter of cattle. The opening declares that monsters must be fought with monsters, and the ending delivers a satisfying revelation that stirs the heart.

Rebecca DeVendra is a figure artist and speculative fiction writer living in Boston. She grew up in Ohio and went to school there, and has a background in curriculum writing. She’s also a mom to three cacophonous, early-rising children. She’s probably in her pajamas, but she has an emergency collar shirt for video calls. Check out her blog.