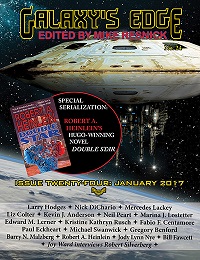 “Giovanni’s Tree” by Nick DiChario
“To Them We Are Merely Clay” by Liz Colter
“It’s Not a Purple People Eater” by Marina J. Lostetter.
“The Torchman’s Tale” by Edward M. Lerner
“Within” by Fabio F. Centamore
“Farewell My Soldier, My Husband, My Love” by Paul Eckheart

The year for Galaxy’s Edge starts out with a piece of flash fiction by Larry Hodges. “Zombies Anonymous” is a cheerful zombie story, where Professor Wills, now a zombie, is happily devouring a family. The daughter Suzy starts to get him to start thinking about controlling his urges to eat every human in sight. It’s fun and funny and nicely paced for the maximum comic effect.

Nick DiChario contributes a story from ancient Italy in “Giovanni’s Tree,” where a stranger shows up at a village to warn them they are about to be forcibly made part of the Roman Empire. The village is renowned for its wine, and Giovanni not only makes them aware of the danger, but comes up with a way to keep the wine away from the Romans by hiding it (as liquid) in a tree. Drinking from the tree also gives you a special gift. This was a rich story of magic and mystery, and I did love the places it went.

“To Them We Are Merely Clay” by Liz Colter sets up a society where the colonists are surrounded by grass, filled with imaginative but deadly booby traps. Dev is a Nameless, a title given to young women who have not been claimed in marriage, and who thus was expendable. The Nameless went into the grass and by trial-and-error (and from the knowledge of those who had died trying before) were slowly working out the path. But Dev may have found a way to put an end to the exercise. I liked the society and characters and the story is a good one. The story is not particularly surprising or twisty, but the elements in it are all very well handled.

“It’s Not a Purple People Eater” by Marina J. Lostetter is a bit of flash fiction about a suburban family whose son finds an elder god in the bathtub. But it’s clear that this isn’t all that unusual: manifestations of gods have been commonplace, and the mother in the story is used to dealing with it. It’s fairly light, but a very clever read.

Edward M. Lerner contributes some modern hard science fiction space opera in “The Torchman’s Tale.” A robot walks into a bar asking if anyone has seen a particular man. The answer is “no,” and the robot takes a drink and starts to talk about the story behind his search. He was once human, and was sent on a search for vital material to save his colony world. But betrayal and fate took a hand. The story is pretty much all talk, but the story the robot tells is fascinating and ultimately sad.

“Within” is another short work, where the narrator is caught facing an alien lifeform that is both fierce and unpredictable. Fabio F. Centamore‘s story quickly presents a suspenseful mystery, with a twisty answer.

“Farewell My Soldier, My Husband, My Love” by Paul Eckheart has a female protagonist who meets Kevin. She is an army brat and he is a soldier, and she feels love at first sight, and has the ability to make it come true. We follow her life with him, which soon creates problems, both caused by and solved by her psychic abilities. Psy is a rarely used trope in SF these days, and the story handles it well, showing how it can corrupt and how the best way to love someone is to do the unexpected.

This was an excellent issue. There really wasn’t anything that didn’t provide good reading. The magazine has changed its model somewhat, offering some stories for free online, but others need to be purchased in order to read.

Chuck Rothman has been publishing SF and fantasy since 1982, with two novels and over 50 shorts stories seeing print.