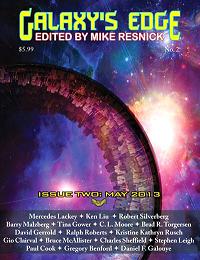 “Effect and Cause” by Ken Liu
“Today I Am Nobody” by Tina Gower
“The Flamingo Girl” by Brad R. Torgersen
“Ghost in the Machine” by Ralph Roberts
“Sparkler” by Geo Clairval
“Child of the Gods” by Bruce McAllister

Galaxy’s Edge is a new online magazine edited by Mike Resnick that features a select list of stories from some big names in the field.  About half the stories are reprints, but the May issue has six new stories.

Ken Liu continues to impress me with “Effect and Cause,” where the narrator comes up against a clever alien weapon that rewinds time whenever the alien ship is destroyed.  It’s the type of story that wouldn’t be out of place in Analog; the main character is faced with the problem and has to come up with a solution.  It’s short and slight, but also very clever.

“Today I Am Nobody” is about a character (first called “Amber,” though identifying her by that name is not right) who keeps waking up as a different person, hoping to become “Rose,” so as to catch the eye of a young man who had fallen in love with that version of her.  It deals with the idea of finding out who you really are.  Tina Gower handles it very well in only her second pro sale.

“The Flamingo Girl” is about Elvira, who has undergone surgery to become a feathered human, a “Special” who is the target of bigotry.  A prostitute at Madam Arquette’s, where men pay for the thrill of sex with someone who doesn’t  look human, she is murdered.  Soto works security at the brothel and, at the request of Josefina, Elvira’s sister, he goes to investigate the crime.  Brad R. Torgersen creates an interesting world and spins out a tale that not only solves the crime, but also highlights the darker side of human nature.

Ralph Roberts‘s “Ghost in the Machine” has a clever conceit:  that you fight computer viruses in virtual reality.  Marcus Teague is good at this, and is called to fix one computer when he discovers it’s a trap.  The lighthearted story has some nice correlations between computer issues and their personifications in cyberspace; since I work cleaning viruses, I could appreciate them.  It’s a very slight story, though, and probably is a little bit too long for the idea.

“Sparkler” is about an odd little pet that flickers with light that Howard’s mother has latched on to.  Mrs. Apperson is old and sickly, and the sparkler is one thing that makes her feel better.  But the pet is showing some strange behavior as Mrs. Apperson gets worse.  Gio Clarival‘s story  is not about a monster, though, and it touches nicely on the nature of love and life.

Bruce McAllister contributes the final new story, “Child of the Gods,” about a man from Kansas City who is taken by aliens and genetically engineered in strange ways in order to be the character referred to in the title.  It starts out strongly, but I just had a hard time relating to the point at the end.

The stories are all well written, but I found the issue a bit disappointing.  The best work was in the reprints, but the magazine is still new and I expect that things will improve as it finds its feet.