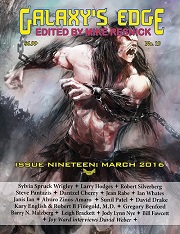 “To Catch a Comet” by Sylvia Spruck Wrigley
“Pretty Pictures at War” by Larry Hodges
“Out of Print” by Steve Pantazis
“C/O the Village of Monsters Past” by Dantzel Cherry
“Montpellier” by Ian Whates
“The Higher, the Fewer” by Alvaro Zinos-Amaro
“The Man Who Saved Manhattan” by Sunil Patel
“Shattered Vessels” by Kary English and Robert B. Finegold, M. D.

In “To Catch a Comet” by Sylvia Spruck Wrigley, a scientist’s routine email communique starts the reader down a rabbit hole of red tape as politicians cover their behinds at the expense of the planet. Wrigley’s eerily hilarious tale depicts what can happen when government officials decide that a natural disaster is someone else’s problem.

“Pretty Pictures at War” by Larry Hodges begins with an internet sensation that prompts its hapless star to seek revenge on the aliens who made him famous, but first he has to get to the fourth dimension. Hodge’s first-person narrative utilizes great comedic timing to portray human aggression as hopelessly impotent in the larger picture.

When robot G0394 first boots up in “Out of Print” by Steve Pantazis, its sense of self clashes with its owners’ morbid expectations, which are reinforced by hand-coded mods. G0394’s internal conflict comes to a crisis when owner Dan urges G0394 to commit a crime.

In “C/O the Village of Monsters Past” by Dantzel Cherry, we read Mardonius Hippogriph’s letter to his absent son. The reader’s understanding of the letter’s intent gradually shifts as Mardonius reaches a heart-felt conclusion.

Horner returns to Montpellier, the ghetto of his youth, as a spokesperson for his employer in “Montpellier” by Ian Whates. As Horner travels deeper in and meets his old comrades, he discovers that something big is changing in Montpellier, and that he can have a hand in that change, either for or against. Whates brings the reader into the complex economy of a ghetto that purposefully mimics real-world problems.

“The Higher, the Fewer” by Alvaro Zinos-Amaro follows exasperated Patrick Hidalgo as he negotiates with tech support to stop his 3D printer from operating on its own. This over-the-top dark comedy has an appropriately cynical conclusion.

“The Man Who Saved Manhattan” by Sunil Patel is a tall-tale style urban fantasy flash about a reluctant hero who saves Manhattan, as told by her legendary brother.

In “Shattered Vessels” by Kary English and Robert B. Finegold, M. D., Shevirah’s purpose as an assassin falters when he falls in love with an incarnation of Chesed (Kindness). English and Finegold’s deftly woven kabbalist tale pits destiny against love through multiple reincarnations of the characters, spanning thousands of years. The narration brings these large themes down to a personal level so that readers will identify with the protagonist’s plight despite the large time-span. Readers do not need to be familiar with the Kabbalah to enjoy this story.