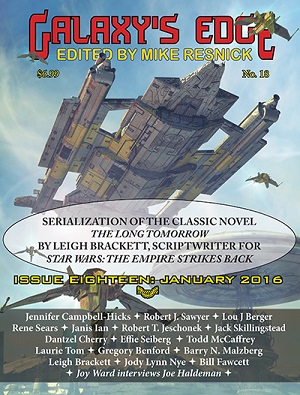 “Full Skies, No Water ” by Lou J Berger
“The Press of the Infinite Black” by Rene Sears
“The Little Robot’s Bedtime Prayer” by Robert T. Jeschonek
“Life on the Preservation” by Jack Skillingstead
“Love, Your Wolpertinger” by Dantzel Cherry
“Thuindergod in Therapy” by Effie Seiberg
“Confidence Game (Sargasso)” by Laurie Tom

“The Bone-Runner” is a post-apocalyptic tale set in a landscape where a disease turned people in the cities into “ghosts” (zombies, essentially). The narrator goes into the city with her brother Skip to scavenge, and accidentally ruins his protective suit, turning him into a ghost. With that weighing on her, she discovers a major treasure, but has to fight to keep it. Jennifer Campbell-Hicks has reworked some of the Orpheus and Eurydice legend into an emotionally strong story. It’s not just retelling the myth, but rather using it to add an extra element to a well-thought-out story.

Lou Berger contributes “Full Skies, No Water,” set on a terraformed world where rainfall is scarce and a “projector” ensures the water reaches the ground. But the company has fallen behind on its payments and the narrator is there to dismantle the device. He meets with a little girl. The story tugs on the emotions and works on that level, though I think it may just be a bit rosy-eyed. The resolution is no more than a postponement.

“The Press of the Infinite Black” by Rene Sears tells the story of Priya, who has been kidnapped and finds herself aboard a ship in deep space. Her story slowly comes to light: she is an expert in programming human bioware, taught by her father, who is a master of the art of adding cyber body parts. But her father is dying, and she has no idea why she has been taken from him. This is a well-constructed revelation story, as we discover the mystery behind her actions, and learn about Priya’s past and the reason why this has happened. Overall, I liked the way it worked out.

Robert T. Jeschonek‘s “The Little Robot’s Bedtime Prayer” is certainly a new concept. The narrator is in a world where house robots are ubiquitous, but, instead of the Three Laws of Robotics keeping them in check, the robots are programmed to believe their owners are God – in every way, with constant worship and prayers. But the narrator thinks that one of his robots, Occam-657, is hiding something from him. The concept is well-handled, and the story comes to a surprising revelation.

Time travel is the focus of “Life on the Preservation” by Jack Skillingstead. Kylie has traveled from the future to Seattle, before the world had ended, and certain cities had been put into a kind of Groundhog Day time stasis, reliving the same day over and over again. Kylie is on a mission, which quickly starts to have complications. I found the ending of the story overly predictable, though the situation was interesting.

“Love, Your Wolpertinger” by Dantzel Cherry is a series of letters from the mythical beast in the title, who depends on the belief of others in order to maintain its existence. It’s a short examination of an old idea.

Zeus visits a therapist in Effie Seiberg‘s “Thuindergod in Therapy.” It seems he has overstepped things and is being punished by being paroled after a prison strike to a retirement community on Earth and has to try not to toss thunderbolts at anyone. But an encounter with Tekhno, the god of technology ends up in a battle he may not survive. The story is an entertaining romp as Zeus juggles life in the 20th century and his own issues.

“Confidence Game” by Laurie Tom is another entry in the series of the Sargasso Containment saga, a shared world that’s been a part of Galaxy’s Edge since 2014. Daryl is a confidence man who’s been discovered and is forced to go on a mission to impersonate another space pilot in order to shut down a smuggling operation. The result is a first class space opera. Daryl is a smart and funny character who’s always on top of things, and who’s a pleasure to read about.

This is another strong issue, and the presence of fewer reprints seems to indicate the magazine is succeeding. It is one of my favorite sources for science fiction online.

Chuck Rothman’s novels Staroamer’s Fate and Syron’s Fate are available from Fantastic Books. His story, “The Brownies of Death” is available in the Flash Fiction Online 2015 Anthology.