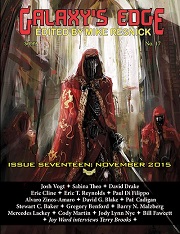 “From the Moment I Laid Eggs in You” by Josh Vogt

“Kill Me!” by Sabina Theo (Translated by Boryana Dimitrova)
“Out of Africa” by David Drake
“Elizabethtown” by Eric Cline
“Wait ‘Til Next Year” by Jody Lynn Nye
“My First Duty” by Eric T. Reynolds
“The Mood Room” by Paul Di Filippo
“The Rose is Obsolete” by Alvaro Zinos-Amaro
“Winter of the Scavengers” by David G. Blake
“The Power and the Passion” by Pat Cadigan
“Fugue in a Minor Key” by Stewart C. Baker

Mike Resnick, the editor of Galaxy’s Edge, wants his readers to know that he recommends undiscovered or forgotten treasures of fantasy and science fiction. I am hoping to find this issue full of both.

The opening story for this issue is “From the Moment I Laid Eggs in You” by Josh Vogt, which gives a brief glimpse into the first moments of the last two weeks of Greg’s life. His brief tryst with an “interstellar parasitoid species” of “space wasp” resulted in her implanting her eggs which will shortly hatch and begin feeding on Greg’s brain tissue, quickly driving him insane. A heartwarming tale of lust and infestation sure to come to an apartment near you soon.

“Kill Me!” by Sabina Theo (Translated by Boryana Dimitrova) reminds me very much of an Asimov story I read long ago but with a much unexpected twist at the very end. It is the tale of Diana Jones, a beautiful 32-year old blonde who falls in love with N-110-23-TK, or Jason as she knows him. A “chick flick” robotic story if there ever was one.

“Out of Africa” by David Drake recants the tale told by Sir John Holborn to his grand-nephew, Randall, of the hunt that ended his desire to hunt. On his final expedition near the Kagera River, west and north of Lake Victoria, the natives of German East Africa bordering Uganda and the Congo told Sir John of the jimpegwe that lived in the river, but none would guide him to the location. The jimpegwe was bigger than a hippo and, in fact, had reportedly killed hippos that had wandered into its territory. The natives‘ tales raised dreams of surprising the world with a new, larger breed of hippo and so his quest began. What followed was a heart pounding experience and triumph, but the proof remained in the ancient savage papyrus swamps of Africa. The fantastic level of detail had my imagination running wild with the intensity and excitement of the hunt.

“Elizabethtown” by Eric Cline is the fictional account of “Custer’s Last Stand Against the Klan,” Custer being General George A. Custer, in Elizabethtown, Kentucky. A very believable tale that presents one possible major historic event that might have had a major positive impact on race relations in America. The author presents a gripping tale which eventually leads toward a very similar end for General Custer and a very similar end for the Ku Klux Klan as has happened to the American Indians of the Dakotas. Would it have resulted in the first black President 68 years sooner? That will be for the reader to judge.

“My First Duty” by Eric T. Reynolds appears to be a happy tale of an automaton working tirelessly to preserve the life of the last surviving human, old Marvin or “the old hermit” in an ancient colony on the moon. The story describes our hero stubbornly scavenging necessities from desolate corners of the colony in an effort to maintain the last of humanity in what was left of the colony on that small plateau. It is only in the last 200 words that the story takes a radical departure from sanity into the insane world of the lone survivor, and you discover exactly why old Marvin doesn’t get out much anymore.

“The Mood Room” by Paul Di Filippo is an interview-type story told by Val Hallogren, one of the original inventors of the Mood Room, the first artificial reality chamber responsive to the user’s thoughts. The story rambles through some technical sounding jargon and the resultant TLA (three letter acronyms) before summarily ending in the story of the first Mood Room sexual encounter. I’m not sure I believe anyone would be allowed to make the on/off switch for such a room be the action of clenching your Kegel muscles, but the scary/humorous result during a sexual encounter can easily be imagined, and I can just as easily imagine the wealth someone might amass upon inventing such a room.

“The Rose is Obsolete” by Alvaro Zinos-Amaro is a tale of going to extremes to protect your one true love. Raymond and Donna Esposito had been married for forty years when Donna suffered a massive stroke that was slowly destroying the woman she was, and killing her. What follows is Raymond’s plan to save her and their life together. It made me stop and think several times whether I would or could do something similar and warmed my heart to know that I would do the same for the chance at the resulting conclusion.

“Winter of the Scavengers” by David G. Blake is a dark tale of Ellie and her husband, Aeric, who had gone off to fight in some unknown war, and who came back to her, changed and scarred from his battle wounds, missing everything he had owned: armor, sword, and his wedding ring. But his love for Ellie remained and Ellie’s love for him, though shaken, remained as well. Only when two men arrived to present her husband’s body did she question what had happened and what he truly meant when he said “war took everything from me and I took what I could find.” A chilling tale of terror at what Aeric had become and wonder at what Ellie would discover was yet to come.

On reading the title of the next story, “The Power and the Passion” by Pat Cadigan, my mind wandered to the Midnight Oil song of the same name. I am thinking “It’s better to die on your feet than to live on your knees” and to say this story went a different direction would be one of the understatements of the year. Mr. Soames is a vampire killer. An evil, white trash, low rent scumbag vampire killer. He knows it and he enjoys it. He gets the call from his handlers who have another job for him which he readily and gladly accepts. What follows is a grisly timeline of him completing the job and then meeting the wife of the father and son vampire pair that he was tasked with eliminating. A very wicked and gripping tale. If you like that sort of thing.

“Fugue in a Minor Key” by Stewart C. Baker is a confusing drama told from the perspective of Katja Maczyk, a young female college student who has just awoken from a sensory deprivation virtual reality holistic simulation experiment, “like REM sleep, but stronger” in which she thought she had been married to Ben, had been a world famous concert pianist, had a daughter Sophie, had lived through the death of her husband and life after with just her and Sophie. All in just eight short minutes. This is a lab experiment, conducted in a University lab to test the human mind‘s response to stress. She awakens with a rare level of confusion and disorientation, positive that her simulated life is reality and her old life is a memory of a memory. A very confusing, but thought provoking story and a fitting end to this month’s Galaxy’s Edge.

“Going backward, once in a while, moving ahead, falling behind, … what do you believe is true? Nothing they say makes a difference this way, nothing they say will do.” –“Power And the Passion” by Midnight Oil: James Moginie, Martin Rotsey, Robert Hirst, Peter Gifford, Peter Garrett, Sprint Music, 1982

Eric Kimminau is a BBS geek turned IT professional seeking those of like mind and character with whom he may share in wit and wisdom.