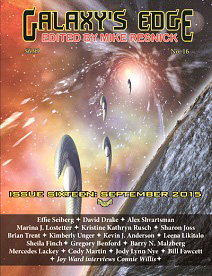 “Recipe: 1 Universe” by Effie Seiberg
“Dreidel of Dread: The Very Cthulhu Chanukah” by Alex Shvartsman
“Cyberplant” by Marina J. Lostetter
“The Ides of Nevah-Nevah” by Sharon Joss
“Hic Sunt Monstra” by Brian Trent
“Sea Change” by Kimberly Unger
“Give Your All” by Leena Likitalo

“Recipe: 1 Universe” by Effie Seiberg details how to discard your current universe and begin a new universe. This clever piece of flash fiction comes full circle as it transcends religion and philosophy in a 13 step recipe.

In “Dreidel of Dread: The Very Cthulhu Chanukah” by Alex Shvartsman, Chanukah Henry confronts Cthulhu to prevent the world from ending during the Festival of Lights and to earn Chanukah the fame it deserves as a holiday. This appropriately irreverent flash piece ends on a pun that will make readers groan.

“Cyberplant” by Marina J. Lostetter follows a bereaved father on his pilgrimage to Machu Picchu to answer the Incan sun god Inti’s inexplicable summons. As the narrator struggles with his personal beliefs and recounts his past, readers are treated to an imaginative world where humans can augment their bodies with plant grafts and cybernetics.

A group of children flee cannibals in “The Ides of Nevah-Nevah” by Sharon Joss, a dark, post-apocalyptic tale with phantasmagoric flare. Joss’ use of unreliable first person narration parades an intriguing lingo composed of mangled proper nouns and various North American dialects.

“Hic Sunt Monstra” by Brian Trent shows the reader a distant planet where ice remembers and recreates everything, including the monstrous alien colossus destroyed by human colonists. As character Jillian relates her deceased father’s findings on the colossus, the reader is presented with the self-destructive, impulsive side of human nature in a finite and unforgiving universe.

In “Sea Change” by Kimberly Unger, living construction Maryanne must choose between the increasingly irrelevant directives she was programmed with and a new purpose protecting the family that lives on her beach. Maryanne’s eventual decision is clearly foreshadowed throughout the story, and so it is the details of her progression, descriptive scenes, and secondary character development that give this tale its umph. Because Unger uses limited first person perspective, readers may be left wanting more information about Maryanne’s original Adversary, and be generally curious about this post-apocalyptic world. “Sea Change” is a story of hope blossoming from evaluating change and redefining the self.

“Give Your All” by Leena Likitalo follows Mrs Dunnoway into The Party headquarters where she has come to ‘give her all’ to the Politician. Through a thorough buildup of tension and circumstance, readers come to understand the exact nature of Mrs Dunnoway’s Donation, and, more importantly, the familial bonds that drive her to this sacrifice. Likitalo delivers a poignant end borne of the complexity of human nature and the nature of sudden loss.