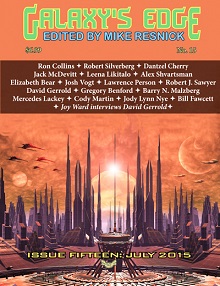 The July issue of Galaxy’s Edge has more than its share of light and humorous stories, a trend that I’m always happy to see.

“The Colossal Death Ray” starts off the issue with a blast. In fact, several. Ron Collins‘ story is about a computer controlled satellite weapon that starts to malfunction, destroying Vancouver because of a problem with its instructions. People on Earth try to get the Death Ray back under control, but as a machine that develops a mind of its own, it starts to make its own decisions with disastrous results. Despite its dark theme, the story is very light—not laugh-out-loud funny (but it’s not trying to be), but very entertaining, with a series of misunderstandings that pave the way for ultimate disaster.

As you might guess from the title “Miss Darcy’s First Intergalactic Ballet Class,” Miss Darcy is a ballet teacher who is suddenly beamed up to the spaceship. It carries the Rezzik Overlord who gives her one demand: teach a group of Rezzik children Earth ballet, which he’s enamored of. Failure means that Earth will be conquered. Of course, the Rezzik are something like squid, and Miss Darcy has only an hour to teach them, but what’s a little pressure in the life of a ballet teacher? It seems clear that author Dantzel Cherry teaches dance; Miss Darcy’s issues are just the same I’d expect to see in a beginner’s ballet class, writ large. The story’s silliness is its greatest strength, and it’s very fun to read.

Things get more serious with Leena Likitalo’s “Do Not Fear to Touch Flesh.” Martina is a robot dancer/prostitute nearing the end of her life. She has been programmed to believe that she will be blessed by the Daughter of the Dark Streets, a legendary saint of prostitutes. Martina is caught between her programming and the abuse she takes in her role. I found the story nicely affecting.

I know Alex Shvartman for his work with humor, but “Islands in the Sargasso” is a serious work, part of his Sargasso Containment series, where the Earth is surrounded by an area where ships lose their instruments as soon as they enter and people go mad. Jason Stanger is a pilot who, in order to escape from attackers, goes into cryosleep and heads for the containment area, hoping there might be a way out. He wakes up 200 years later, on the Venezia Outpost. Humans have found ways to get through the barrier, but it’s a difficult process, and, more importantly to Jason, they are under imminent attack. I know nothing about the rest of the series, but that’s not really necessary. It’s first-class space opera where Jason has to confront his weaknesses in order to survive.

“Escape Mechanism” by Josh Vogt is another light tale, a bit of flash fiction where Rachel finds God (literally) among the stars—and it’s a space squid. It’s a cute “be careful what you wish for” tale.

Lawrence Person contributes “Saul’s Diary.” Saul is a cranky old man, with memory issues caused by an injury in Vietnam. He complains about everything, and even punches out a Secret Service agent. But Saul’s issues make him the perfect person to help deal with an alien invasion (even though Saul thinks the whole thing is fake). Once again, a light story that brings a few smiles.

“A Mild Case of Death” finishes up and continues the lighthearted theme. David Gerrold‘s story is about Dave, who finds himself taken to the afterlife by Death. He first tries to cheat it, but begins to see exactly what the afterlife is. I think it’s certainly the first story like this where the afterlife has a gift shop. In any case, Dave goes through the process, and learns how everything is organized. Another good, humorous story (I especially liked the “Dave’s not here” reference).

The July issue seems to be chosen for light summer reading, and it’s perfect in that role. Galaxy’s Edge has been consistently publishing first-class work, and this issue is no exception.

Chuck Rothman’s novels Staroamer’s Fate and Syron’s Fate were recently republished by Fantastic Books. His story “Dinosaur Stew” will soon be appearing in Temporally Out of Order.