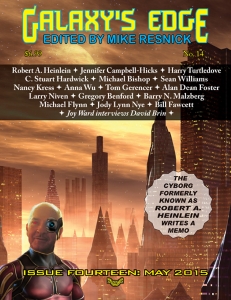 Seven-year-old Elise, a child scarred by fire, lives with her mother and father in seclusion, tending a lighthouse. Benjamin March is a first lieutenant in the Intergalactic Fleet, and on this dark and stormy night he is lost and in need of shelter. In “Shore Leave” by Jennifer Campbell-Hicks, I thought at first we would be treated to an updated version of the 1948 classic movie, Portrait of Jennie, but while there were still some hints of this, it—thankfully—did not wander into romance territory. Instead, we are treated to some nice literary allusions to the effects of light—especially in how it affects a dark or murky past. I liked Elise as a character. She is strong-willed, but not grotesquely so, though how her parents raised such a well-adjusted human in utter isolation remains a mystery. Personally, I think that would have been a stronger story, as the end of this one fell a little flat for me.

Behold the lowly copper penny! Stuart Hardwick, in his story “Luck of the Chieftain’s Arrow,” gives us the unlikeliest of heroes—the penny. Having been arrowhead, jewelry, bell, and then finally a penny, the narrator of this tale is an immortal entity trapped in copper by a shaman’s ignorance. Wanting nothing more than to be set free, it endeavors to educate its owners just enough to do so, but eventually comes to care for humanity in a way humans never seem to do for themselves. This bit of spirit-infused metal travels through history—Forrest Gump-like—mostly observing, but sometimes influencing that history. The ending is left to the reader, but satisfying nonetheless. Very well done.

“The Dark Matters” by Sean William is a short-short that is hard to pin down. Susan Barker is a teenager who understands that what is left behind each time someone uses a d-mat booth—a device I can only conclude is a Star Trek-type transporter—is the lost soul left by the destruction of the original body. That’s really all there is to this story—a shallow dive into the implications of such travel. It would have been more enjoyable without the minor editing error, and the fact that the point of view shifts from third person limited to first person. It is a completely unnecessary trick, and if it was meant to illustrate the underlying theme, it fell short.

Nancy Kress, in “Margin of Error,” gives us a nice look into the mind of someone not so much bent on revenge, as having enough patience to see it fulfilled. Karen was once a scientist, now a mother of three, and her sister Paula robbed her of both credit for her research and her husband. Two damaged women fighting over the other’s life choices, and too invested in their own to see the other’s betrayal. While I saw the ending coming a mile away, it didn’t make it any less satisfying.

“The Restaurant at the End of the Universe” by Anna Wu is exactly what you think it is—a tale told within the confines of the universe defined by Douglas Adams—yet appropriately resembles Larry Niven’s The Draco Tavern in execution. In this restaurant the only currency required to purchase a meal is the telling of a story, and the story-within-the-story is “Laba Porridge.” It is a beautiful tale of both the draw and the danger of taking up the writer’s quill. Ah Chen is a young author who sells his ability to love for all the greatest gifts an author can possess, and soon finds what those gifts are worth without love. Like laba porridge, each ingredient blends with and compliments the others only when that one important piece is present. The moral here is less heavy-handed than I present, and Anna Wu does a wonderful job in this story. Recommended.

“I found out one day that aliens had become intensely interested in my sandwich.” And with that opening line, we’re off to the races! “And All Our Donkeys Were in Vain” by Tom Gerencer is a neat little tale of mutually assured destruction by deli meats. Our protagonist (annoyingly never named) discovers the tasty little nosh in his hands is subject to the inverse square law of foods, and that what is a gourmand’s delight here on Earth, is a weapon of mass destruction on a planet light-years away. Fully cognizant of such a law (as a Texan, I have tasted the Cincinnati variant of a substance the inhabitants there call “chili” and found it… wanting) I can understand the hero’s trepidation in handing over such a powerful weapon. Hand it over he does, and is soon met by another alien in need of a similar weapon to fend off the first. The endgame is not unique, but it is fun. This is a good read, and a nice diversion for a rainy afternoon.

And now we come to the real deal—a fresh installment of a story from the Draco Tavern. Larry Niven, with the story “Closing Sale,” is in his element. Rick Schumann, as always, is running the tavern, acting as bartender, diplomat, facilitator, and chronicler. When dozens of alien species invade Earth, where else would they go for a drink? A series of supernovae between the Magellanic Clouds turns out to be nothing more than beacons pointing here caused by a possible union strike at Sagittarius Transit Control. Multiple ships converge on the planet, take up orbit around the moon, and much commerce ensues, changing the inhabitants of this lonely blue dot in myriad and unintended ways. This story feels like a set-up for a larger story to come later, and never really gets going for me. Still, it was nice to see the old gang again.

Clancy Weeks is a composer by training, with over two-dozen published works for wind ensemble and orchestra—his most recent work, “Blue Ice, Warm Seas,” was premiered in Houston on March 28, 2015—and an author only in his fevered imagination. Having read SF/F for nearly fifty years, he figured “What the hell, I can do that,” and has set out to prove that, well… maybe not so much. His first short story, “Zombie Like Me,” will appear in an upcoming issue of Stupefying Stories. He currently resides in Texas, but don’t hold that against him.