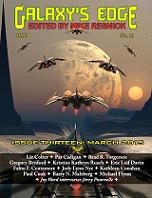 “The Ties That Bind, the Chains That Break” by Liz Colter
“Gyre” by Brad R. Torgersen
“Twilight on Olympus” by Eric Leif Davin
“The Latest One” by Fabio F. Centamore
“Prey to the Gods” by Kathleen Conahan

In the world of Liz Colter’s “The Ties That Bind, the Chains That Break,” class lines are drawn between mono-gendered and bi-gendered individuals, and movement goes in only one direction: down. How hermaphrodites arose from the mono-gendered population is up for debate, however the instances of their births is growing among both mono and bi-gendered couples. Children are ticking time bombs to their elite parents, holding the potential doom of the entire family’s social standing if they develop bi-gendered traits in puberty. Jerusha is from the slums of Alawea and returns there now as a messenger, the only job available to bi-gendered people. Jerusha is carrying a message from the ruler of Zasna to the ruler of Alawea and stops at his/her parents’ home to wash before completing the journey. After learning about the disappearance of his/her birth parent, Jerusha becomes obsessed with the idea of an insurgent army possibly gathering outside of the walls. Could this be the event that finally topples the bigoted regime implemented centuries ago, and releases Jerusha and everyone like him/her from the squalor and shame that are their daily lives?

“The Ties That Bind” unfortunately suffers most from emotionless characters. The first person narration is descriptive, yet bland. The bleak tone is expected given the setting, however emotions from the narrator and between the characters—even in key, tumultuous scenes—are bleached, as if emotion itself is something that is dependent on having a definitive gender. Additionally, the story feels as though it is a much longer narrative compressed into short fiction length. The pace is rushed near the end, and the reader gets a sense of there being much more going on behind the scenes to explain the characters’ sudden, convenient thought processes.

In the midst of a nightmarish viral drug frenzy, Sal, an interplanetary courier is just trying to scratch out a living. But Brad R. Torgersen throws Sal’s stable life into jeopardy in “Gyre” when a mysterious woman hands him a briefcase before being gunned down before his eyes. Now Sal has the Space Patrol hot on his heels and the Courier’s Guild lobbing all sorts of criminal accusations against him. What is real and what is clever deception swiftly becomes entangled, and Sal must venture beyond the Sargasso, the edge of no return in the solar system, to find a cure for the Rust infection once and for all.

Torgersen manipulates the reader with the skilled fingers of a puppeteer in “Gyre.” From the violent opening to the flipped alliances and double-blinds, Sal is never quite sure where he will be taken next, and neither is the reader. The sense of danger is high throughout the entire story and though it ends with the suggestion of more (“Gyre” is part of a serial) it is nonetheless self-contained and ties itself up in a satisfying conclusion.

Phoenix Castillo has just crash landed her ship Ares at the base of Olympus Mons in “Twilight on Olympus” by Eric Leif Davin. Every member of her crew has perished in the crash, and Phoenix herself has been badly injured. Her only hope of salvation lies in the robot vanguard launched two years earlier. Waiting on the surface of Mars, it has autonomously been synthesizing rocket fuel designed to propel the human research team back home. With limited supplies and grave injuries, Phoenix must now stretch herself thin to reach home, one way or another.

While much of this short story reads like a science textbook on Martian geography and the history of Mars exploration, it has a surprisingly touching and human ending. Despite my initial impressions of the first half, the final half brings the whole thing together in a lonely, moving tribute to the sacrifices of human advancement. While the reader only gets to know Phoenix for a very short time comparatively, by the end we nonetheless feel the hopeless isolation of her situation, and the cold desolation of the final moments of the story.

On the day of their anniversary, with their relationship literally and figuratively dying, the characters in Fabio F. Centamore‘s “The Latest One” deal with the inevitable each in their own way. She is desperate for some sort of connection, while he is growing ever more distant, barely recognizable, barely there at all. The clock is running out and it seems there’s nothing that can be done to save what once was.

Centamore utilizes a very bare bones narrative style to tell “The Latest One.” Much of the history and even the mechanics of the characters and the world are left up to the reader to interpret. While this style of story-telling can be engaging, I’m not sure if it works for “The Latest One.” There is obviously a lot of detail in this futuristic world that has been left out. The meaning behind the story is clear, however a deeper understanding of the events and circumstances leading up to this short scene are a little harder to extrapolate from the conservative word count, and make the story as a whole somewhat unsatisfying.

Mada is the mother of the night, the one-eyed huntress, and the death dealing goddess of Kathleen Conahan’s “Prey to the Gods.” She isn’t sure where she comes from, but she has always followed the humans—from when they were just apes painting in caves until their numbers and their prayers become too deafening for her and her kin to continue listening to. Mada sleeps. When she wakes, the world is changed, the people are changed, the gods are numerous, wiser and more diverse. The humans pray in elaborate ceremony and something old, older than humans, older than the gods, older than Mada herself, stirs beneath the ocean waves.

While the narrative starts slowly, “Prey to the Gods” nonetheless unfolds into something unexpectedly magical. Mada’s journey from barely sentient aspect to fully aware goddess with morals, ethics and responsibilities is captivating. The question from who sprang whom is etched into every line of this story, and allows the reader some philosophical exploration on the nature of humanity and godliness. The climax carries this theme forward and then begs the question, from where sprang the first?