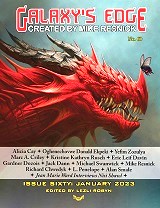 “The Lament Configuration” by Alicia Cay

“Cain and Abel” by Yefim Zozulya

“The Gardener of Ceres” by Marc A. Criley

“Old McDonald Had a Farm?” by Mike Resnick (reprint, not reviewed)

“Leap of Faith” by Alan Smale (reprint, not reviewed)

This issue’s editorial makes a very important announcement. Starting at the end of this year, the publication will no longer be an on-line magazine. Instead, it will be a print anthology, to be published in the form of two books per year. Meanwhile, there are still three remaining on-line issues to go, including this one.

The two main characters in “The Lament Configuration” by Alicia Cay create singing toy birds. One of the men carves them, while the other literally breathes songs into them. Sadly, the latter loses this magical power after their adopted daughter dies.

Unknowingly, he gives a bird his partner intended to keep as a memento of their daughter to a woman whose own daughter is dying. When she learns of the mistake, which leads to a fierce argument between the men, the woman gives them a puzzle box. If opened correctly, it will ease the pain in their hearts.

As might be imagined, this is a very emotional story, dealing with grief as well as with parental and romantic love. The fantasy premise is charming, and results in a delicately sentimental tale. The setting is France during the reign of Louis XVI. The author captures the sense of time and place convincingly.

“The Last Man” by Eric Leif Davin takes place in a near future world where almost all of humanity has been wiped out by a plague. The narrator is scavenging for food in an abandoned supermarket when she unexpectedly meets an armed man doing the same thing. He forces her to take him to the home she shares with another woman. His plans for the future are very different from theirs.

This is a grim story, with a climax that may shock some readers. Its power is lessened by the fact that the man is a stereotype of a male supremacist, expecting the two women to happily bear his children. The theme, although not the premise or the plot, is reminiscent of stories such as “When It Changed” by Joanna Russ or “Houston, Houston, Do You Read?” by James Tiptree, Jr. (Alice Sheldon.) The present work might have been better appreciated had it appeared in the 1970’s, at the height of second wave feminism, like these two classics.

“Cain and Abel” by Yefim Zozulya is just over a century old, but newly translated from Russian by Alex Shvartsman. As the title implies, it retells the Bible story of the first murder. The author doesn’t change the account in any important way, but adds a great deal of depth to the characters.

In “The Gardner of Ceres” by Marc A. Criley, a woman returns to the asteroid mentioned in the title in order to reclaim the frozen body of a dead lover. On arrival, she confronts a man who is extremely angry, believing that she abandoned the lover for her own ambitions. However, there is a lot more going on than he realizes.

The author creates a complex future in great detail. There are also vivid descriptions of the plant and animal life inside the asteroid’s greenhouses. The story’s major plot twist depends on misleading the reader, although those astute enough to pick up on subtle clues may not be deceived. Without giving anything away, I thought there was a simpler solution to the problem at the heart of the story than the one presented, given the advanced technology of this future.

Victoria Silverwolf notes that one of the reprinted stories is also a version of a familiar Bible story.