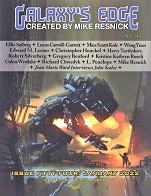 “Hive at the Dead Star” by Lucas Carroll-Garrett

“Echoes of Gliese” by Christopher Henckel

“Ishmael in Love” by Robert Silverberg (reprint, not reviewed)

“As Old as He is Young” by Mica Scotti Kole

“The Hand of God” by Wang Yuan

Six original works of imaginative fiction and a new translation from the Chinese version of the magazine appear in this issue.

The characters in “Hive at the Dead Star” by Lucas Carroll-Garrett are descendants of humanity, in greatly changed form, at an almost inconceivably distant time in the future. They survive in pods orbiting a black hole, deriving the energy they need from what escapes from the edge of the singularity. The protagonist has a plan to deal with the impending loss of this energy by forming a new colony around another black hole. When the plan is blocked by the others, the protagonist rebels and comes up with a secret scheme.

I have explained the background and plot very poorly, I think, because these elements of the story are so far removed from ordinary experience that they are difficult to conceive. The author shows great originality and imagination, to be sure, with a sweeping vision that takes in trillions of years. This skill is something of a double-edged sword, however, as it is difficult for the reader to understand exactly what is going on or to relate to these nearly inhuman characters on an emotional level.

In “Echoes of Gliese” by Christopher Henckel, starships are living, sentient beings. When the main character’s ship gives birth to an infant vessel so badly deformed that it is scheduled to be euthanized, he fights to save its life in dangerous, illegal ways. The memory of his own personal tragedy leads to his final decision.

The author is to be applauded for dealing with an important issue, and for avoiding any easy answers. Despite the serious theme of mercy killing, much of the narrative reads like a melodramatic adventure story. Although one can definitely empathize with the protagonist’s dilemma, some of his actions seem downright foolish.

“Worrywart” by Effie Seiberg is a comic fantasy about a hunter of monsters who is accompanied by the incarnation of her anxieties, which takes the form of a small, invisible creature. While on a mission to slay a hydra, she finds out that she is not the only one with an annoying companion.

This is a very lighthearted, rather silly tale. Despite some profanity, it seems best suited for young adults.

In “Brock’s Grotesquery” by Galen Westlake, a man decorates his house with multiple gargoyles. The statues come to life at night, protecting his property. A conflict with a woman across the street elevates into open warfare when she acquires her own, larger and stronger army of gargoyles. The man figures out a way to defeat his enemy without violence.

Although not blatantly humorous, this urban fantasy has a tongue-in-cheek feeling. The fact that the man is a widower, deeply mourning the wife he lost to a debilitating disease, seems jarring when compared to the rest of the story’s semi-serious mood. If nothing else, the solution to the man’s problem is a very clever one.

“As Old as He is Young” by Mica Scotti Kole is a very brief tale of a father and his young son, who is dying of accelerated aging. The father discovered a type of stone that absorbs sunlight and supplies the energy to the trees that grow on it. The city in which they dwell is constructed of this material. An unexpected change in the trees offers a hint of hope for the boy.

This is an example of those rare stories that one wishes were much longer. The reader is only given a taste of this intriguing world, and the ending promises more than it supplies.

“Relatively Speaking” by Edward M. Lerner deals with the so-called Twin Paradox, which should be familiar to most readers of science fiction. (In brief, travel at velocities near the speed of light causes time to slow down, so that the returning voyager is younger than a twin left at home.) The narrator comes back from a trip to another star, expecting to find his brother much older, but the sibling has a surprise for him.

This story depends entirely on its twist ending, which is a weak one. The rest of the narrative is mostly exposition, explaining that the voyage was made in order to investigate a signal coming from the star system. This subplot comes to a disappointing conclusion as well.

In “The Hand of God” by Wang Yuan, translated from Chinese by Roy Gilham, a man works at a newspaper office, using a computer that takes bits and pieces from various sources and combines them into a supposedly new article. He adapts the technology to produce fiction built from the works of multiple authors. Eventually becoming a best-selling writer in this way, he discovers the penalty for this kind of high-tech plagiarism too late.

For the most part, this is an intriguing, plausible tale, with an interesting look at the seductive power of ambition. The conclusion, however, strains the reader’s suspension of disbelief, with the sudden appearance of much less likely events, nearly apocalyptic in scale.

Victoria Silverwolf has to get her pharmacist license renewed this year.